The Arts of Pacific Asia Fair 2010 is over. It began with a gala last Thursday evening that was a joy to behold. The hordes descended upon us booth-holders interestingly, charmingly, curiously, outrageously and elegantly attired in Asian scarves, silks, robes, headdresses, shawls and gowns, as colourful a scene as could possibly be and apparently very San Francisco. There was music and dance, children on stilts and beauty queens. I took several pictures which I hope to post when I get back to The Netherlands.We booth-holders were all keyed-up in anticipation. The vetting of the objects (to ensure their authenticity and appropriateness for the show) had taken place and all preparations were complete. The pavilion was utterly transformed by the beautifully arrayed Asian treasures.My own stall was, in fact, a large exhibition space adorned with more than 20 of Thomas Murray's best 19th century textiles (not for sale) and fine Batak wood-carvings. The exhibit was so stunning against the soft grey walls that many people gushed with spontaneous compliments. Many were inspired to enquire about the objects. Where were these textiles from? Why hadn't they ever seen them before? How lovely and unique they were! I perceived that the exhibit represented a kind of introduction of the Batak to a public that was more used to jade, kimonos and lacquer ware. This was exactly what Thomas Murray and I had hoped for. 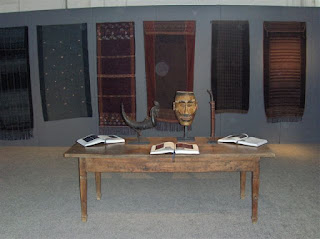 Exhibit of Batak textiles and carvings from the collection of Thomas Murray.  Photo Sandra Niessen
The next day, I re-arranged the stall a little. The exhibit was working just a little too well and was drawing attention away from Legacy in cloth  rather than TO the book. I placed the book in more prominence and made signs to inform the visitors that this was a book launch rather than a " regular" stall with artifacts for sale. That seemed to do the trick. 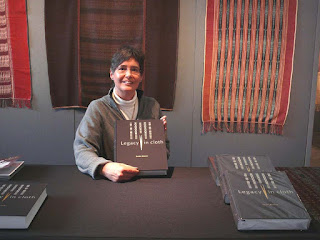 All who saw my book expressed appreciation for the design of the cover, the quality of the photographs, the layout and, of course, the weight of the tome! Several book dealers and gallery owners expressed an interest in distributing it. Some bibliophiles bought it for its book-qualities alone! I can't say that I was born to sell, but having a top-quality product like Legacy to flog made the whole process quite enjoyable. I found myself wanting to phone Cecile Noordzij, the book designer, every time I received another compliment, and wished that she could share in the pleasure of receiving them all.

Very pleasant social bonds quickly developed among the dealers in the booths. I came to appreciate and enjoy my various exhibition "neighbours", all of whom were kind and very interesting people: Diane Hall and Alan Marcuson from Brussels, who had made a spectacular display of their colourful kimonos, the Verne family from Ohio known for their beautiful and diverse Japanese prints (the Verne Collection), Keith and Curtis Clemson, as new to this game as I and with a sumptuous array of gold-decorated Sumatran textiles (and an astonishing collection of excellent Batak textiles), Rudolf and Karin Smend from Cologne, world-famous for their exquisite Javanese batiks, Wen Hua with her treasures from the Silk Road, Lee, Vichai and Chad Chinalai with their unusual and popular array of ancient and modern adornments from Thailand, Louis Nierijnk, with whom I could speak Dutch, and his eclectic Southeast Asian array. We talked, laughed and ate together, congratulated each other on our successes, commiserated with each other's rueful moments of bad luck, looked after each other's stalls to facilitate coffee and toilet breaks and generally enjoyed getting to know each other. The whole event could hardly have been more convivial! 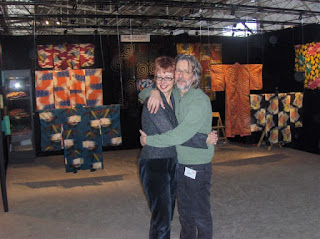 Diane Hall and Alan Marcuson from Brussels in front of their spectacular display of colourful kimonos. Photo Sandra Niessen
Of course, the visitors to my stall and the book buyers were a great pleasure to meet, many of them happy to share the origins of their interest in textiles, books and Asia, their knowledge of weaving and so on. Several of them were in the throes of publishing their own books! Respect for their privacy keeps me from publishing their names -- but I was aware that I could write a tome as thick as Legacy  about Legacy's buyers....
The Festival Pavilion at Fort Mason in San Francisco is now gearing up for the next fair: Tribal and Textile Arts. Apparently this second one is even better subscribed to than the first with not an inch of space to accomodate another booth. It is promising to be an even busier weekend...

(See some photographic impressions of exhibitors and visitors to the two shows).