Yesterday Lasma, her husband Ober and I visited Ma Kamra, Lasma's weaving teacher. She was flushed with excitement. She had just returned from Medan. The office of the Bupati (District head) had asked her to do a demonstration of her weaving skills and she pulled out a photograph to show us. There she sat, like a queen on a raised podium with her freshly painted equipment. During her month of intensive work at the Fair she finished a dozen headcloths and fetched many an admiring gaze. She felt proud of having been asked to do the demonstration and pleased with the amount that she had accomplished. A little recognition can go a long way.

I was hoping to discover that she had continued her exploration of natural dye, but I was disappointed. She had prepared some yarn for the dye (in itself a long process) and was frustrated because the yarn was of such poor quality that it made no sense to continue. She emphasized that the process had taken up so much of her time. She didn't want to proceed with the lengthy task of making a really high quality textile unless someone ordered the textile from her in advance and she was thus assured of a sale. Between the lines it became evident that she very much wanted to be able to make a replica of an old textile that I had given her photographs of.

This evening I contacted her by text message. I wanted to know what she needed/hoped for in order to be able to achieve her goal. Again and again she indicated that she needed a buyer. It seemed to make little difference that the quality of her textile was as yet unseen and that it wasn't clear what materials she would use. I asked her if it wasn't the case that she needed more knowledge of natural dyes and access to better materials and in addition to a better market? After a long and frustrating exchange, she let me know that her roof was leaking and her floor in a dreadful state and what she really needed was money to improve her housing conditions. "I work very hard. I cannot afford to waste any time. I need a buyer for my work." Her words hit home. Once again the issue of poverty was rearing its ugly head, crowding out a woman's creative spirit and eroding the culture. She really needed money in a worrisome and overwhelming way.  I thanked her for opening up to me and said I would ponder the situation.

I thought of Lasma's need for a place to work and how it had led to the building of the Weaving Centre. I recalled Ma Kamra's enthusiasm at the thought of moving there. Would that be a solution for her? No, just a band-aid solution. What she really needs is a structural improvement -- not only of her humble home, but of her weaving conditions and especially her market. She does the impossible by continuing to weave when other people have given up because of the poor market conditions. What kind of change can I initiate that will help her on the long term? I put the question to her but she remained focused on finding a buyer for her textile.

Her need pushed me to the realization that if and when we can and do sell textiles at the Weaving Centre, the full regular selling price must go to the weaver (any tribute to help keep the Centre alive must be added on to the price and not subtracted from the weavers' proceeds). Ma Kamra receives her yarn from a Middle Man, and weaves the cloth for about US$6. The textile is then sent to a twiner to do the finishing fringe and patterned edge, and then the cloth is sold with the Middle Man making as much profit on the cloth as Ma Kamra is paid to make it. (The twining and the yarn cost in the neighbourhood of US$6 as well.)

It also makes me realize that I have to make a thorough investigation of yarn. Where does it come from, what kinds are available, and why is the price so high? What can we do to lower the costs and get dependable quality?

Weaver empowerment is a micro-process.
Posted by Sandra at 23:46 No comments:

Back in Tano Batak, I am having an eye-opener. I met up with a young woman whom I have known from a distance for a few years, primarily through Facebook. She is bright and won a scholarship to the University of North Sumatra, which meant reduced tuition. Her family is poor but everybody agreed that she must not pass up this opportunity to study. Her father is ill and cannot work. Her mother is chronically sick but does her best to look after the family.  They grow a bit of rice and chilli peppers. There are two younger siblings still at home. And so my young friend went off to University, to claim the right that she had won to a good university education and to assume a new challenge of adulthood. She was 19 years old. She is now in her second year and doing well with about a 75% average. How she is accomplishing this has left me awestruck.  Her stories are stuff for a novel.

She plucked up her courage two years ago and took a bus to the city -- a luxury huge enough in itself because it cost money that the family didn't have. When she arrived, she got out of the bus and stood there in the station not knowing what to do. She had no family in town and no friends. Medan is a teeming, hard city and she had no money and no destination. The only thing she had was her courage and her confusion. Various men catcalled her, "Hey, where are you going? Do you need a lift?" Wisely, she did not trust them. When a young woman with a kind demeanour asked where she was going and invited her to come along, she decided to trust her. She found herself in the home of a kindly man who took in young students of her culture and helped them find a place to stay. She could speak her own language and met other young people in comparable situations. That kind man is still there and still a bit of a fall back for her, letting her know from time to time when there are hand-me-down clothes available for her to come and get. She has no clothes other than what her older sister hands down or other people give to her.

Initially she found a place to stay but it was a bad choice and led to a crisis with tears, sickness, fear and trauma. Now she has found a place that is tolerable. She sleeps in a small room with 4 other girls. They lie like sardines on two small mattresses. They share the cost of water and electricity. If one gets sick, they all get sick. The air quality is bad and the tropical head is stifling in the small airless room. The important thing is that they all trust each other; they are good people. She has no bed, no closet, no clothes to speak of, no security. She lives by the grace of the young woman who rents the room. She has one bag in which she stores her stuff.

Every time we chat together more scales fall from my eyes. I have told her how much I admire her, that what she has accomplished is, in fact, impossible. Incredible. Not doable. And yet she does it and her marks are good. I tell her that she is capable of everything. She is unbeatable. She tells me about the psychological scars of poverty and her decision to smile. You can complain and worry, she says, but it doesn't help. It is best to be thankful for all that comes your way.
Posted by Sandra at 03:27 No comments:
Labels: poverty

Home for weavers still being built

I am thankful to Lasma for sending on a few more photographs. It has been rainy and the building is delayed a little, but it seems more or less on track.

We have a front room where weavers can meet and work -- they can also work on the front veranda.

The string of rooms at the back are places where weavers can stay. There is a kitchen and a bathroom accessible to all and all get the light of the sun in the morning and fresh air.
The side of the house forms a boundary with the neighbour, so it is a solid wall. 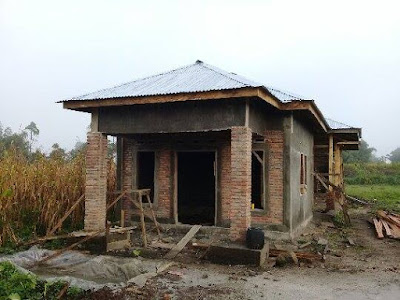 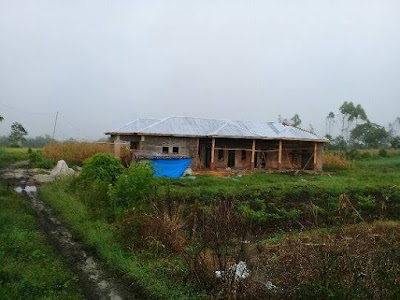