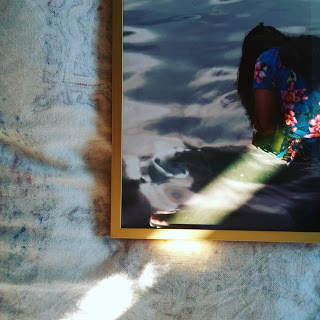 Back in Tano Batak, I am having an eye-opener. I met up with a young woman whom I have known from a distance for a few years, primarily through Facebook. She is bright and won a scholarship to the University of North Sumatra, which meant reduced tuition. Her family is poor but everybody agreed that she must not pass up this opportunity to study. Her father is ill and cannot work. Her mother is chronically sick but does her best to look after the family. They grow a bit of rice and chilli peppers. There are two younger siblings still at home. And so my young friend went off to University, to claim the right that she had won to a good university education and to assume a new challenge of adulthood. She was 19 years old. She is now in her second year and doing well with about a 75% average. How she is accomplishing this has left me awestruck. Her stories are stuff for a novel.
She plucked up her courage two years ago and took a bus to the city -- a luxury huge enough in itself because it cost money that the family didn't have. When she arrived, she got out of the bus and stood there in the station not knowing what to do. She had no family in town and no friends. Medan is a teeming, hard city and she had no money and no destination. The only thing she had was her courage and her confusion. Various men catcalled her, "Hey, where are you going? Do you need a lift?" Wisely, she did not trust them. When a young woman with a kind demeanour asked where she was going and invited her to come along, she decided to trust her. She found herself in the home of a kindly man who took in young students of her culture and helped them find a place to stay. She could speak her own language and met other young people in comparable situations. That kind man is still there and still a bit of a fall back for her, letting her know from time to time when there are hand-me-down clothes available for her to come and get. She has no clothes other than what her older sister hands down or other people give to her.

Initially she found a place to stay but it was a bad choice and led to a crisis with tears, sickness, fear and trauma. Now she has found a place that is tolerable. She sleeps in a small room with 4 other girls. They lie like sardines on two small mattresses. They share the cost of water and electricity. If one gets sick, they all get sick. The air quality is bad and the tropical heat is stifling in the small airless room. The important thing is that they all trust each other; they are good people. She has no bed, no closet, no clothes to speak of, no security. She lives by the grace of the young woman who rents the room. She has one bag in which she stores her stuff.

Every time we chat together more scales fall from my eyes. I have told her how much I admire her, that what she has accomplished is, in fact, impossible. Incredible. Not doable. And yet she does it and her marks are good. I tell her that she is capable of everything. She is unbeatable. She tells me about the psychological scars of poverty and her decision to smile. You can complain and worry, she says, but it doesn't help. It is best to be thankful for all that comes your way.
Posted by Sandra at 03:27
Labels: poverty