Back to Boru Panjaitan’s Village (17 November) 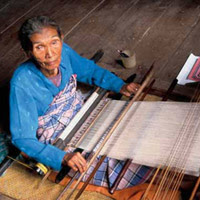 Boru Panjaitan is depicted in Legacy on page 461. She is weaving a tumtuman textile. I knew that she lived in the then Kecamatan Lumban Julu (a political division), one of my favourite regions for spectacular cloths rarely found in museums. I recalled how much I had enjoyed visiting her and how amazed I was at her capacity to weave in her old age. During the Back to the Villages project last June, I had her plasticized photograph in hand and we stopped here and there along the road looking for someone who could tell me where her village was, but we could find nobody who recognized her.

Ompu Okta’s village in Lumban Julu has been the most important site for filming our Rangsa ni Tonun text about Batak weaving techniques. Ompu Okta boruboru (Okta’s grandmother) is our weaving star Ompu Okta doli (Okta’s grandfather) turns out to be our narrator because of his wonderful voice and his affinity to our project. In the evening, he likes to go to the local café – a little wooden structure at the edge of the padi fields where he purchases a glass of tuak (local palm wine) and exchanges the news. Early on in our project, he explained to me that he often met up there with the son of someone depicted in my book. “The first time I opened the book, it was to that page,” he explained. “The weaver is a member of my family”.

How amazing that this should be the case, given that I had sought br. Panjaitan and because my search was in vain, I had given a copy of Legacy to Ompu Okta, a weaver that I had never met before, because I wanted to be sure that a copy of Legacy would be left behind in this amazing weaving region. It turns out that Ompu Okta is not only related to Boru Panjaitan, but a close neighbour. Standing on the bridge by the river beside Okta’s village, br. Panjaitan’s house can be seen nestled against the trees scarcely more than a stone’s throw away.

I had two copies of Legacy left over from the Back to the Villages project. I had stored them in Medan and I now had them with me. My friend, Loan Oei in Amsterdam, with whom I have shared my love of textiles as well as the vicissitudes of life for many decades, had given me a text and urged me to donate a book in her name if the occasion ever presented itself during this filming project. I decided to pair her up with br. Panjaitan’s descendants.

At the end of our stay in Ompu Okta’s village, when our favourite driver from the back to the Villages project, Pak Jerry, had come to pick us up and we were loaded and ready to go, Ompu Okta doli climbed into the vehicle too and brought us to br. Panjaitan’s home. Luck was with us because her son had already returned from his work in the padi fields and his wife was there, too.

The house was as I remembered it; a beautiful wooden colonial structure. They had made some changes to the interior by removing a wall and this had only enhanced its airy spaciousness. Br. Panjaitan’s daughter-in-law fetched some coffee and they told me stories about her. She had continued to weave until the end. Her son, my host, had also learned to weave and knew all of the steps in the process, but was so mercilessly teased about being a weaver that he had stopped. Someone had come and claimed her weaving equipment. Only one baliga was left, a heavy, sword-like piece of wood used for beating in weft. Br. Panjaitan’s was very narrow. They fetched it for me from the room where she used to work and gave it to me to remember her by. It was an extraordinary gift to receive on my birthday. I promised that I would oil it as this is how weaving swords are maintained.

Just like many other people in this region, br. Panjaitan’s son knew all of the steps in yarn production, but had none of the instruments that we were looking for: pipisan, busur, sorha and iraniran. 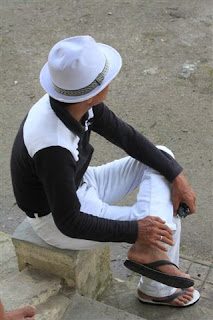 On our way to the main road, we dropped off Ompu Okta at the bridge leading to his village. We were a threesome once more, back again with our favourite chauffeur, the skilled and indomitable Jerry Hermansyah. While I was talking inside, mas Nashir had been inspired to take a few stunning pictures of him while he waited for us. When he pretended to do a bit of a Moon Walk, I dubbed him Jerry Jackson and the name has stuck. Mas Nashir has even set up a facebook account for him under that name. Our winning team was back together and we were heading off for new adventures.
Posted by Sandra at 16:51