During Fiber Face 3, the exhibition of international fiber art in Yogyakarta, I was approached by a young blond woman who wanted a copy of Legacy in cloth. Her name was Linda Kaplanova. I had just sold my last copy. Linda said that she would contact me again in Europe and we became Facebook friends. She said that she lived in the Czech Republic

In Prague, the presentation of Rangsa ni Tonun (the film by MJA Nashir and myself about Batak weaving techniques) took place on Friday 22 June. Linda Kaplanova was in the audience. She had seen the announcements about our event on Facebook and had written to ask me to reserve a book for her.

There was some magic in meeting her in Prague after having met her briefly in Yogyakarta two years earlier. I gradually recognized her as I stood there before the audience prefacing our film with an explanation about the importance of what we have called "Pulang Kampung" (returning cultural information and research results to indigenous peoples). She brought me a box of luscious strawberries and Prague waffles.

Linda was lovely. Those were special days for her. She had just completed her final project for her Master of Arts and during the week, her art academy on the bank of the Moldau had been holding Open House. Her project was on display. Today her degree was conferred. The future stretches before her. When she visited us at the University of Life Sciences in Prague, she was with a friend with whom she wishes to work. They are full of idealistic ambition. Linda wants to make a go of it as an artist and bring the beauty of Indonesian and other indigenous textiles to the people in the Czech Republic. It will be a challenge, but already she has met that challenge in her final project; she is organizing an Indonesian Day of films, textiles and photographs for the fall.


Of course we also talked about my plans to "pulang kampung" with our Rangsa ni Tonun film, i.e. to bring the text and the film back to the Batak people in the villages. We talked of the decline of indigenous culture and arts and the ways in which we will be able to meet the future. I repeated my refrain that has become a theme of this European tour with our film: it takes the world to sustain an indigenous art tradition. The future of indigenous cloth will be diverse. It will be found in art, fashion, hobby, craft, and interior design as well as the survival of indigenous traditions. Linda represents one or more of those paths. She is already an inspiring educator and artist who is incorporating indigenous techniques in her work. She is raising awareness and will face the challenge of finding a commercial avenue to ensure the viability of her ideals. 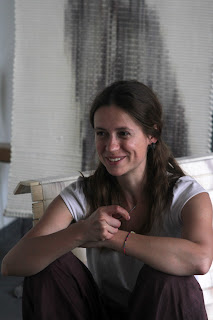 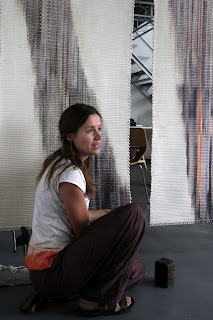 Linda studied batik in Yogyakarta but ikat captured her heart when she saw it during her travels in Flores and Sumba (Eastern Indonesia). Her final project was an application of the ikat technique to interior design. On Sunday, MJA Nashir and I went to see it.  The design of her chairs had been inspired by chairs in Yogyakarta. She wore a shirt and pants that she had dyed with the same colours that she had used in her project. She was one with her project as she described the processes, challenges and goals of bringing it to completion. Now she treated us to homemade lemonade and cherries picked from the tree of a friend. Her health and grace were luminous.

Linda took us on a walk from the river to the presidential palace. The path started out narrow and treed. Suddenly it opened onto a green oasis. We sat down on the grassy field and then lay there to revel in the luxuriant calm and beauty of the earth. Linda goes there often, she said, to relinquish the stresses of her busy life in the city. There she finds inspiration and wholeness. 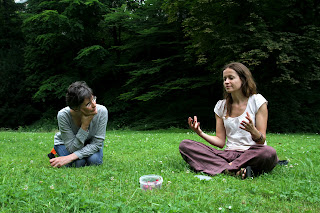