Lasma br. Sitanggang, Ny. Damanik, Mak Sandi, has been busy with a great transition in her life. She has married and now she has two children. It has been a busy time for her and so she needed to place the matter of weaving on the back burner while she turned her attention to her role in her culture. Her son Sandi was born within a year after her marriage, so the changes that she went through were significant. 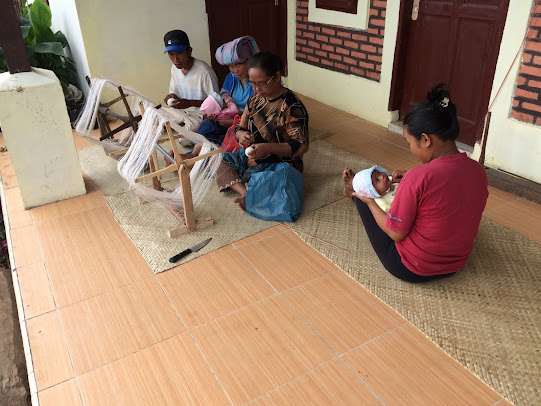 About a year ago I learned that she was pregnant with a second son. And shortly afterwards, out of the blue, she sent me video clips of herself weaving a bulang. I just about fell off my chair! I hadn’t known that she had once again turned her focus to weaving! Being a perfectionist, she had been shy to divulge the news.

So she was having a double gestation! She was very anxious to get the cloth done first because she knew that after the birth there would be little time for weaving. It was slow going because her belly was swelling and because she was doing it entirely herself, although with her Mother’s expert guidance. “It is about counting and counting and counting,” she told me laughing. She had known that the bulang was complex numerically, but hadn’t realized quite the full extent of how extremely and meticulously arithmetic it was. “If you don’t get the count during warping right,” she said, “nothing after that works properly.” Each stage of weaving determines the success of the next stage, because each part of the cloth builds on the previous part. She is like her mother in being very careful and attentive to detail. I believe it shows in the cloth. I remember her father telling me that not everybody can weave a bulang. You have to have focus and precision and determination and patience.

After the birth of her second son, I didn’t know whether to dare to ask her whether she had finished her bulang, but finally I did so with great trepidation. I knew that it would be hard on her if she hadn’t met her goal, and also how difficult it would be at a later stage for her to pick up where she had left off. To my surprise, pleasure and great relief, she didn’t hesitate for a moment and immediately sent me this video of her finished oeuvre. I was so proud of her the tears rolled down my cheeks.

Mak Sandi is critical of her work. I see skill and focus, while she sees every tiny error. Nevertheless, she is also ambitious. She wants to weave another and make it even better. What a steadfast and determined young woman. Congratulations, Mak Sandi. This is a major accomplishment. I think about how proud her late father would have been. He passed away during the gestation period and didn’t get to see either finished product. He had been the one to encourage his wife and his daughters to weave so that they would be proud keepers of their culture.