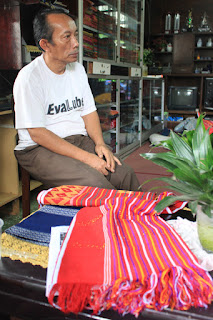 Since giving a copy of Legacy to Ir. S. Tambun in Kaban Jahe last June, I have had a few opportunities to chat with him through Facebook. He wasn’t home when I presented the book to his sister and we hoped to meet another time. My visitors from YPBB seemed pleased at the prospect of meeting him and so we dropped in unexpectedly before heading back to Medan on 2 December. Luckily, Ir. Tambun was there.


He received us warmly in the front room where someone else was pulling textiles out of the glass case and showing them to a buyer. It was clear that his textiles were of high quality. I remembered my quandary about giving a book to someone who had a workshop of semi-mechanized looms and ultimately my decision to do so was because of his reputation for reviving old Karo textile motifs and designs.
He was a serious, clearly very dedicated person and immediately explained why it was better to weave on semi-mechanical looms than backstrap looms: you can weave many cloths from one warp (while you have to wind a new warp for each textile woven on a backstrap loom), the weaving goes much faster, the result is regular and standardized without any of the flaws found in backstrap weaving; the semi-mechanical loom has a comb so that the warp is constantly evenly-spaced. When I asked him why he wouldn’t just opt for a mechanized loom, he explained that much of the currently fashionable Batak supplementary-weft patterning had to be inserted by hand and could not be performed using the jacquard system. It was true that the fine yarn and regular weave made his products look and feel better than the backstrap woven, much-flawed variants that he showed us made of coarser yarn.
Of course, I am a strong proponent of backstrap weaving, but not to the exclusion of products on other kinds of looms. What Ir. Tambun showed us underscored, for me, why backstrap weavers should not compete with machines: they will always lose. It is a worst possible scenario: the poor weavers work like mad without any hope of making a decent wage, while the quality of their work declines because they weave too fast. No, I am a proponent of backstrap weaving because of the quality that it can have. No machine or semi-mechanical loom can compete with a Batak weaver of excellence in the old style: someone who takes her time, who executes each step with love and pride, and who yields a product with beautiful irregularities that shows the “hand of the weaver”. Such products are works of art. They are not handwoven versions of mechanized production. The two paths must diverge. The selling prices of the two products must also diverge. Hugely.

I have accepted the decline of Batak weaving as a consequence of the forces of modernization. But I also believe that room must be created for the art product and for weavers working in the traditional fashion with beautiful yarns and earthy colours. The weavers who make such cloths will be much fewer and father between. They will be called ´artists’. Creating the room and support for artistic textile production is, I believe, a social need and responsibility.

All the while, the semi-mechanical “textile industry” may develop in the Batak area with all of my blessings! An environmentally-friendly, weaver-friendly employer of many would only be a boon to this rather economically-depressed area. And the more competitive on the external market, the better! Ir. Tambun showed us beautiful textiles that his workshop made in the “Karo style” and explained that his buying public was limited to those who made purchases for ritual needs because the design of the textiles announced Karo identity. He then pulled out an all-blue textile, of very fine yarn, that did not announce Karo or Batak identity. He showed how it had been inspired by Batak patterns.
The final product, however, had been redesigned so skillfully that it was simply “a lovely cloth”. It reminded me of an Indian khadi cloth that I frequently wear because it of its great versatility and I found myself longing to own this blue cloth made in Kaban Jahe.
I asked Ir. S. Tambun if I could purchase it. He smiled saying that it was a new creation and that, so far, he had only given one to the wife of the Governor of North Sumatra; it had not yet been launched on the market….but that he would like to give me one to thank me for my book, Legacy in cloth! We walked over to the loom where it was being woven and he cut one off for me. I immediately had visions of myself wearing it at the upcoming WISDOM conference in Yogyakarta and stuffed several copies of Ir. Tambun’s business card in my bag. I want to tell people about him and his work! 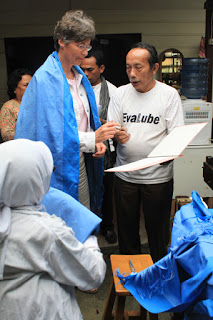 I am thrilled with his creation. It is the kind of creation that I find appropriate for semi-mechanized weaving. It is rooted in the Batak tradition but has universal appeal and does not compete with traditional cloth. When I wear it, I will feel that I am wearing the future of the commercial textile industry in North Sumatra and the product of a truly clever and innovative designer.

I hope that the industry will develop with much concern for its environmental impact so that it will come to mean far more than just income for participating weavers. Weaving industries are notorious for polluting dyes and noisy working conditions. May this industry encourage health as well as financial well-being for its weavers and owner as it moves towards the future. May the industry become as sustainable as the ancient designs from which it takes its inspiration.

Thank you, Ir. S. Tambun for this beautiful textile that, for me, represents an exciting vision of the future.

P.S. Later, though facebook, Sahat Tambun gave me these details about the textile:
Kain disebut tenunan dobby, terbuat dari bahan full spunsilk ex China, desain sebangun dengan uis julu jongkit (uis Karo), penggunaan multi purpose.
[Translation: The cloth you are referring to is woven with a dobby (mechanism that makes small patterns that are simpler than those made with a jacquard loom); it is made from "full spunsilk from China"; the design is derived from uis julu jongkit (a Karo textile); it has a multi-purpose function.]