When my friend in the UK, Pamela Cross, heard that Ompu Elza's textiles had been exhibited in China, her response was immediate: this needs to be made visible for all to see. "Hang the photograph of the bulang in the Chinese exhibition on the wall of the Weaving Centre," she suggested. It wasn't long before she had also taken it upon herself to commission a T-shirt to celebrate Ompu Elza's great achievement. At the end of July a group of textile enthusiasts would visit the Weaving Centre and the shirt could serve as a prominent visual reminder of this illustrious highlight at our Centre.

Mas MJA Nashir saw the brilliance in Pamela's idea. He has done all of our Pulang Kampung T-shirts and knows everything about the art of T-shirts; he had supported himself with the craft while he attended university. Living in Pekalongan, he had a team to help him. He went to work immediately. 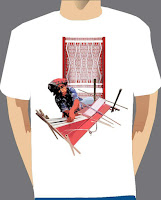 The process was fun and, in the end, also important. I shared the various stages of the design with Pamela and her excitement grew. I told Lasma that the T-shirt was in the works and anticipation in the village also mounted. Anticipation, I was learning, was an important part of the tour and we were having it simultaneously in North Sumatra, Java, England and The Netherlands. None of us could wait to see Ompu Elza's face when she laid eyes on Nashir's product.

At the last minute there was some doubt as to whether the shirts would arrive on time. The T-shirt had become an emblem of honour. It would be the talk of the town. I could not countenance having to disappoint everyone with an announcement that we hadn't been able to get the shirts to the village on time. Gulp. Luckily our friend Arjuna Bakkara was heading home from Jakarta on Friday evening. Enough of the shirts were done on Thursday evening for Nashir to package them up and send them on the bus to Jakarta that night. Arjuna picked them up, flew them to Medan and then bussed them to Pematang Siantar where Lasma and her husband picked them up on Saturday, with one day to spare before the tour. Such relief!  For a mere item of clothing? No, this was not just a T-shirt; this shirt contained love, admiration, pride, beauty, friendship, our shared dreams coming true.

I asked Lasma to immortalize Ompu Elza with her T-shirt by taking a photograph of le moment supreme and here is the result. Lasma included a quote from Ompu Elza: "If Sandra is proud of my textile in China, I am twice as proud wearing this T-shirt". Her smile had never been wider. Her shirt is a source of constant joy and celebration for her, an historical landmark. Words could never have done what these shirts do. 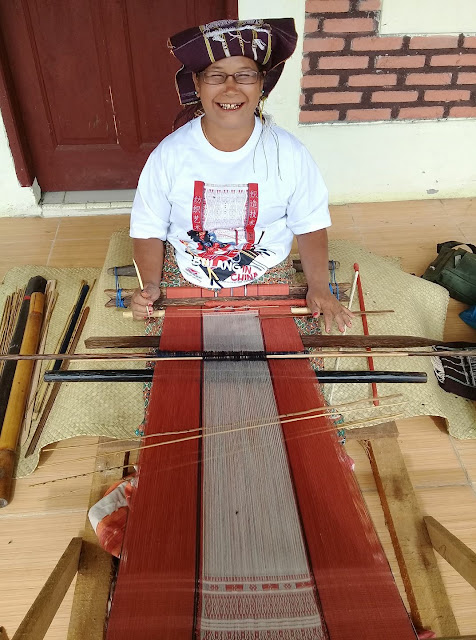 Nashir confessed that he had worn his everyday since he had taken it off the press. He was not exempt from the excitement. Not having one in Europe, I wore one of Nashir's T-shirts from the Pulang Kampung III journey, on the day that the tour visited the Weaving Centre. These shirts retain their meaning. It made me feel like a part of everything. 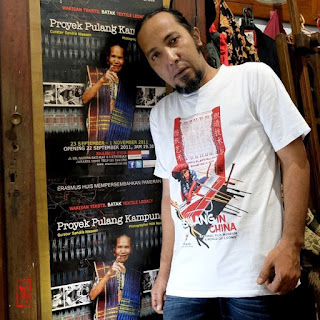 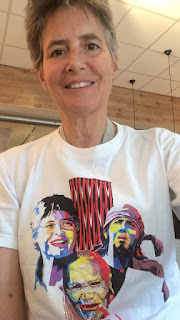 The T-shirts have given me pause to ponder Ompu Elza's bulang, that other material item at the Weaving Centre that is having enormous impact. I have known Ompu Elza for as long as I have known Lasma. She is quiet, modest, always friendly, a bit shy. For eight years our relationship consisted of little more than sweet greetings and farewells with smiles in between. No real content.

Until she sat down in her loom. That is when I finally met Lasma's mother. I saw someone of stature emerge. I saw her peaceful, graceful spirit allowing her to resolve every tangle in her yarn and patiently ensure that every gesture in her loom was accurate. I saw textiles grow under her hands that had perfectly straight selvedge edges, a sign of balance and a lot of experience. I saw focus and determination. Ompu Elza's textiles were even and calm. A weaver weaves her own personality. I saw her authority and expertise. I hadn't known what to make of this woman who one day announced her intention to start weaving again. I had had no expectations but my admiration and respect grew every single day. 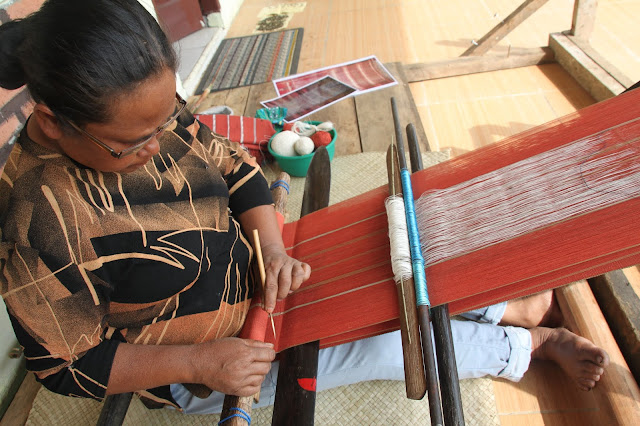 I spent long hours with Ompu Elza as she wove. Sometimes I had a camera in my hand and sometimes a notebook and pen. Mostly I just sat and observed as the sun slowly made its way across the sky. Sometimes I asked questions. She answered patiently, often putting down her sword to give me her full attention.  She repeated her answers to make sure that I had understood and that her answer was sufficient and complete. I saw that same diligence as when she wove and I began to wonder whether her character had been shaped by the hours she had spent in her loom. "I am the same way in the fields," she said. "I don't like to hurry, don't like to work by the clock. I don't take breaks. I like to proceed steadily, in a focused way, slowly and very surely. That's just the way I am." This gave me the first inkling that I was in the presence of a master. She was not a weaver who just slammed in the weft to get a cloth ready for market; she was someone who attended to details and for whom the final product was her foremost priority.

One day while she was working on her second textile, she looked up from what she was doing, and I saw another facet of her personality emerge. "Mantap," she said. "Mantap". (Super!) "I didn't think I could still do this!" She was expressing amazement at herself. "I haven't woven for so long and I didn't know if I could still remember this. Super!" Her face was wreathed in smiles and for a moment she was exuberant. All of us sitting around her, her children and I, laughed with her infectious energy. Later she told me how much she liked the combination of weaving in the loom and working as a farmer in the fields. "Weaving forces me to think," she said. "It keeps my brain sharp. Working in the fields allows me to move and sweat. Then I feel better physically. You don't mind if I don't weave everyday?" "Of course not, I said. It is up to you how you organize your time! I am happy that you would like to weave for me, but when and how much is entirely your own choice." "Then I choose for this balance, back and forth between the fields and the loom, depending on how I feel, my other duties, and the weather," said Ompu Elza. This made me so happy. This is what handicraft should be, I thought. This is what weaving must have been before the market became overbearing.

Often, as I sat beside her I felt quite emotional, overwhelmed by the beauty of her character, so willing, so kind, so uncomplicated, so gentle, so strong. I saw a deep beauty in this woman that I had known for 8 years, but never met until I saw her in her loom. When I saw the photograph that Lasma sent of her wearing her bulang while weaving a bulang while sporting her bulang T-shirt, I teased by calling her Ompu Bulang. That, in my heart of hearts, is truly how I think of her. She did not just weave yarn with her skilled and careful hands, she wove her personality and she wove our relationship. My hours beside her loom are precious to me as I recall them here in The Netherlands and miss the beautiful ambiance of my Weaving Centre. I may have built it, but she is creating it.

How important is something tangible; how important is making a product. Perhaps that is what the English idiom: "having something to show for oneself" means. The culture in the material. The loom gives Ompu Elza the opportunity to create herself. I wonder if it is just I who thinks of her as whole when weaving is part of her life? I wonder if that is how she thinks of herself? One thing is clear. Weaving is not drudgery to her when she has the freedom to do it when and how and where she wants. She is the weaver to whom I absolutely must give free rein and impose no constraints whatsoever. This genius deserves all the room she can get.