It was a pleasure to meet Ompu Jonathan again. I had not seen her since she participated in our spinning workshop with Ompu Erwin in Sianjur Mulamula a year ago (February 2015). Her goal remains unwavering: she wants to make a "sibolang" textile, the textile typical of Samosir Island where she lives. I quickly learned that she faces many more stumbling blocks. The cotton that had been planted in the vicinity seems to have contracted a disease and needs to be resown. The spinning wheel that we revived with Jesral Tambun's help has some structural flaws and needs adjustments if she is to spin with greater ease. She also needs an iraniran or yarn winder. She has no access to information about dyeing with indigo and even if she did, there are no longer any earthenware pots to hold the dye. On top of all of that, she does not know how to decorate her warp yarns with ikat. Oh yes, and the leaves needed to tie off the ikat no longer grow in the vicinity, her weaving sword is too short and she doesn't know anyone who can make a new one for her. The wood is also no longer available. A breathtaking list if one is struggling alone to revive a textile. Of course I wanted to help in some way.

We (Lasma, Ishak, ibu Tetti -- our Johnny Appleseed in cotton revival, Ibu Theodora and I) sat sitting together on a woven pandan mat picking the seeds out of cotton bolls. I had my computer nestled amidst the white fluff and duly took note of Ompu Jonathan's challenges. 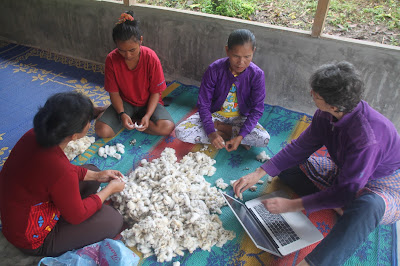 We picked through them one by one, discussing options, sounding out Ompu Jonathan on her comfort zone and preferences. Her advantage was that she remembered procedures from her childhood, even if she had perhaps never done them herself, and from the sound of it, she was an accurate and careful weaver. Where and how to start helping her to realize her goals? The one thing that we could do on the immediate term was to enquire whether her elderly acquaintance would be able to assist in reviving the 'hudon tano', the earthenware pots needed for the indigo dye.

Bataks used to make these pots in large, medium and small sizes. They had the red colour of the clay, often with a blackened side from the firing process, and a wonderfully round and friendly shape. In the modern day, plastic pails are used to hold the dye, but the hudon tano has the advantage of having a narrow neck that restricts the surface of the dye exposed to the air and oxygen, whereby the dye bath has a longer life.  In times past, the clay pots were also used for cooking and storage. Production ceased probably in the 1970s, victim of the plastic age and of prices that support neither handicraft nor small-scale home production. Ompu Jonathan remembered how they used to be stacked and tied at their necks and then carried to market on a stick. There was someone who lived fairly close by, she said, who used to make them. We were up for a walk, so we conceived a plan to visit this elderly person to explore the possibility of reviving the pot.

We climbed, rode and hiked our way up and up Samosir Island to find Ompu Heki.  The scenery was gorgeous. Every time we came to another turn we had a yet wider view of Lake Toba and Pusuk Buhit, Navel Mountain, with its head in the clouds and its feet bathing in the inky dark water (the water used to be blue before the fish farm craze at the edges of the lake). 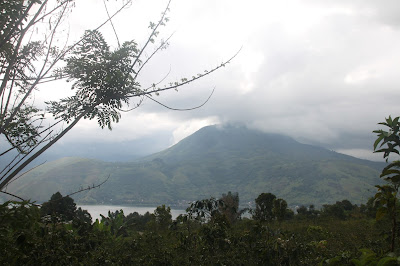 We passed occasional villages. The road became lumpier and the human population scarcer. This was increasingly Tano Batak as it used to be before the days of loud speakers, lurching mini-buses and dusty, busy streets. The top of Samosir Island. The weather was gorgeous. Despite the threat in the distant clouds, the air was pleasant. Not too hot. The air was clean. It was a pleasure to be there.

Around one more turn we saw a few houses standing in a row. The first one was our destination. An elderly woman with grey hair wearing a sarong and a loose blouse was slowly making her way towards the front of the house and clambered up the stairs. She said she was sick. She seemed tired. But her door was open and all seven of us gradually assembled cross-legged on the hand woven pandan mats that were lying next to the doorway inside the house. It was dark; the only light was from the open door. It was possible to discern an old cupboard with a shelf above it along the back wall, and another along the side wall. In front of it were plastic pots and a plate bearing a small tomato and an onion. Above the doorway there was a kind of platform used for storage. The abode had been a Batak traditional house before the attempt to modify it into something "modern".

The elderly woman scarcely knew Indonesian. Her language was the 'old Batak' that I remembered from my days more than thirty years ago in Harian Boho. It had a flowing and cheekily aggressive character and was packed with idioms. She was very serious and direct but her eyes were distant. She seemed neither happy nor well. Her cough was painful. The betel-chewing Ompu Jonathan, who was the only one who knew our elderly host, explained why we needed the hudon tano. Ompu Heki listened with a dull, unmoved expression. She told us that the person we were looking for had died. Ompu Jonathan then asked if she would be able to help us because hadn't she also made pots?

Then followed a long turiturian, a story that my command Batak was unable to follow. Afterwards Ibu Theodora explained that that Ompu Heki had shared her associations with earthenware pots. It was a painful story and some emotion had surfaced during the telling, although not enough for a tear to dribble down her cheek. There had been a long drought. The rice crop had failed; the kernels were yellow and empty. Ompu Heki's children were still very young and absolutely dependent on her. In desperation she turned to making a few pots and sold some on the market. Thus she obtained enough money to put a little bit of food into each child's mouth.

She did not want to make pots for us. She could not bear the pain of these associations. She refused adamantly to help us revive the craft. And there we sat with one after the other using the power of argument to get her to change her mind:
The culture was dying out; if she didn't help us, who would? She was the last who knew, who remembered.
Ompu Jonathan needed the pots. Take pity on Ompu Jonathan who is struggling to achieve a noble cultural goal.
Would it not be a sin to not pass on cultural knowledge? The future stretches endlessly ahead of us -- a yawning gap if the pots belonged only to the past.
We would do the work; she would just have to say how it is done.
The arguments were repeated again and again. Finally she capitulated but not with pleasure and not wholeheartedly. Her eyes remained dull and distant. And then we bade her farewell and left to make our way back down the hill leaving her sitting in the doorway. 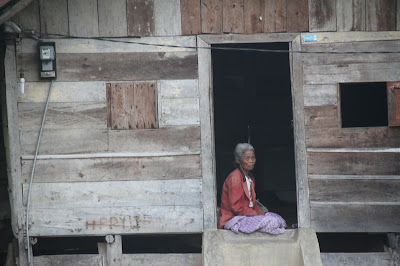 Could this be it, then? One reason why young people don't weave? Associations that are too painful? How poverty ruins the art in craft? Certainly parents discourage their children from taking up craft because it will only give them a hard life. I reflect on our Rangsa ni Tonun film in which the guru praises the practice of weaving as perpetuating the work of the goddess. This, then, epitomized the flip side. I had been shown in very stark terms how poverty interferes with the perpetuating of culture, makes the practitioners feel anything but close to a goddess.

The experience was surreal. Ridiculous, absurd, even silly:  a group of adults sitting there in a Batak house pleading with an elderly woman to share her cultural knowledge. It felt a bit desperate, as though the whole future of the culture was in her hands, and we simply had to convince her of the importance of her skill. I don't think I will ever be able to forget that moment. Sometimes I wish I could. Will I one day recount to grandchildren these minute details of how Batak culture slowly died out in the early 21st century?  How I met the last woman who could make earthenware pots….


Postscript
A week later I have met a younger woman who can help us make earthenware pots. She is vigorous and full of humour. Batak culture suddenly feels resilient. There is hope….