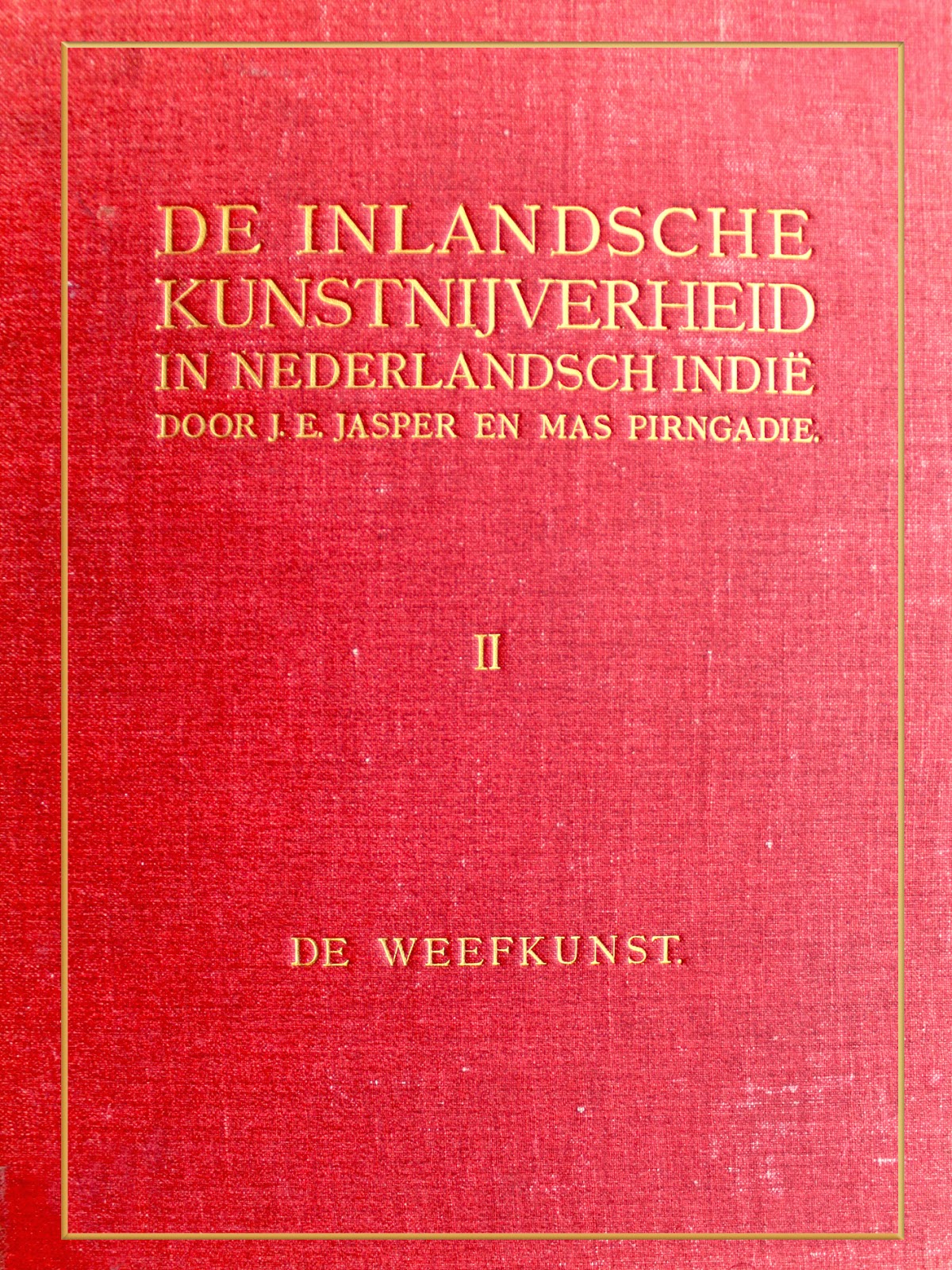 During the past couple of years, it has become clear to me that people do not know what Jasper & Pirngadie wrote about natural dyes in the Batak area. This is probably because the book is written in Dutch. Because there are so few sources on Batak natural dyes, and because Marzuki Rahman asked me to translate it for him, I thought it might be useful to post my summary translation. Here it is.

- telep (Karo) or itom (Toba) = prepared indigo dye bath
- The dyestuff is made from the small leaves of sarap (Karo), taim (Toba and Simalungun) = Indigofera tinctoria
- also made from large leaves of selawen (Karo, Toba, Simalungun) = another kind of indigo plant
- information about these plants can be found in F.S.A. de Clercq, Nieuw Plantkundig Woordenoek voor Nederlandsch-Indië (1909). He writes that the blue obtained from salaon is darker than the blue obtained from tajom. The black colour is obtained from mixing the two kinds of blue. This colour is also obtained from boiling the Indigofera leaves without mixing them with lime.
- the length of time the yarns are submerged in the dye bath depends on the intensity of the colour that is desired. In Karo, the dyeing sometimes takes place for two years, every day for at least one hour. If the dye bath is exhausted (mate), then new dye is prepared for that yarn.
Day after day the yarns are submerged in the dye bath, and especially in the Karo area, where the population wears almost exclusively blue clothing, this women’s work is done in association not just with yarn but also with white textiles, in almost every village.
This is why one finds blue dye vats in the village plain or on the balcony (ture) of the Karo Batak house.
Usually lime is added to the blue dye solution.
In the Toba region, to give the yarns an intense black colour, before or during the dye process the yarns are buried in gambo or the mud of the sawah, and the fixer  (sigiragira) is the juice of the bark of the joring (pithecolobium bigeminum Mart, of the Leguminosae). On Java, this tree is known as jengkol.
In the Simalungun Batak area, dyeing with blue is done as follows:
The yarns are washed in ash water – they use the ash of the baneara (?), harumonting (Rhodomyrtus tomentosa Wight, one of the Myrtaceae species)

and sanduduk (Melastoma, one of the Melastomaceae species). Then the yarns are submerged in a solution of water with pounded sihampir (a kind of grass) and curcuma; ash water is also added to this mixture. Also in the Simalungun area, they know the selaon plant (= the Karo selawen, a species of indigo) as a recipe for blue dyeing.
In the Simalungun area, they will dye the yarns black in the following way: they submerge the yarns first in the sigiragira (fixative), consisting of a solution of jambu leaves (the jambu is a species of Eugenia, one of the Myrtaceae), jambu bark and antahosi leaves (?) and then in a bath of mud (tanah porsigiraan).

In the Toba area dyeing with red (manubar) is of higher status and more complicated and yields a very lively dark brown-red colour. A lighter but inferior tint is found in Simalungun textiles.

To obtain the red (rara), the roots of the bakudu (= mengkudu) serve as the dyestuff. Two species are known, namely the bakudu Toba (which is obtained in Toba), and the bakudu Pahae (obtained from Pahae = downstream area, on the coast). The latter is better and more expensive than the former. The roots of the bakudu Toba are pounded or chopped into small pieces and mixed with the ash of sanduluk leaves (sanduluk or sanduduk is the Melastoma, a species of Melastomaceae).
Before submerging the yarns in the dye bath, it is necessary to submerge the yarn every day for four weeks in a mixture of water, ash of the sanduduk wood and pig fat. This task is called manetei and is exactly the same as the Javanese ngetelli, except that the Batak use pig fat instead of oil.
Using this method, the light red that is typical of the Simalungun and Timur textiles is obtained. The Toba refer to this light colour as modom, or sleeping, lacking life or vigour.
To obtain this (light) colour, the yarns do not need to be dyed for more than two months in the dye mixture.
To obtain the brown-red colour, they have to use the bakudu pahae. The bast of this plant is mixed in the same way with the ash of the sanduluk leaves and as the fixative (sigiragira), to obtain a darker colour (manunga nuwa) the ash of jior wood (jior = johar tree = Cassia siamea Lam), a species of the Leguminoseae) or alternatively of halok wood, is added.


To obtain the lively brown-red colour using this dyestuff, the yarns have to be dipped for a very long time.
Posted by Sandra at 15:24 1 comment:
Labels: Jasper & Pirngadie De Weefkunst, natural dyes 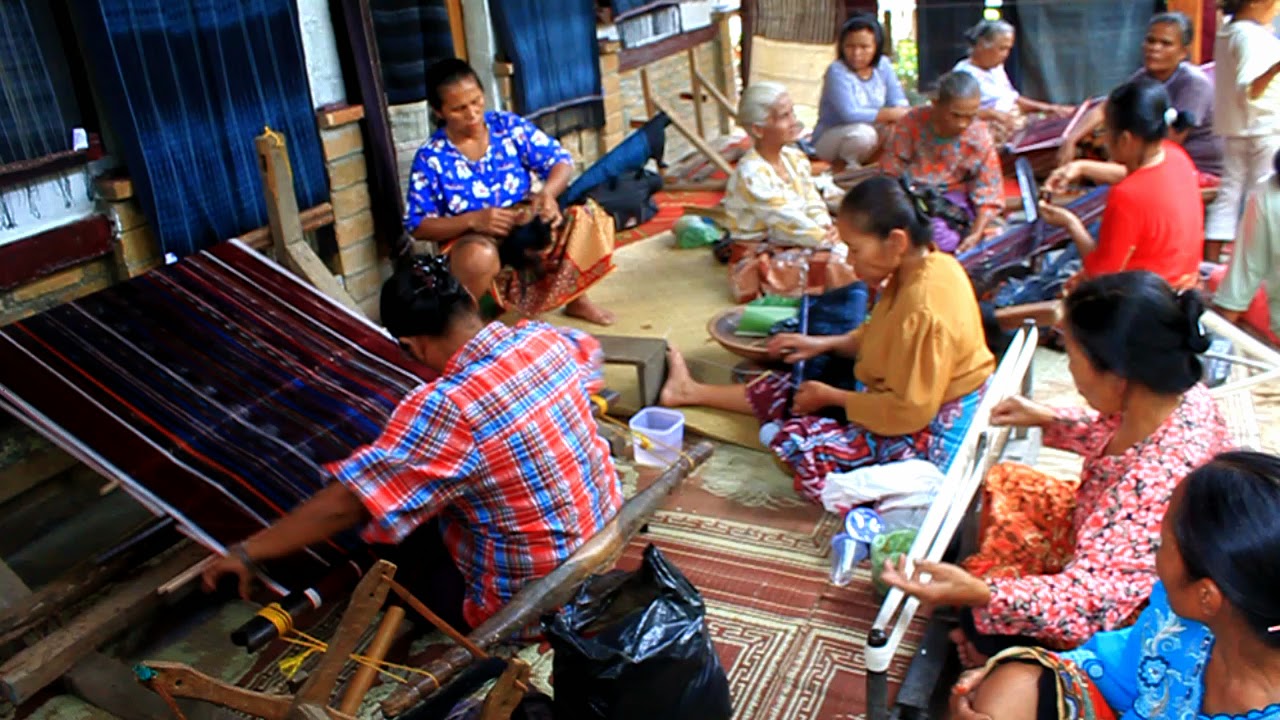 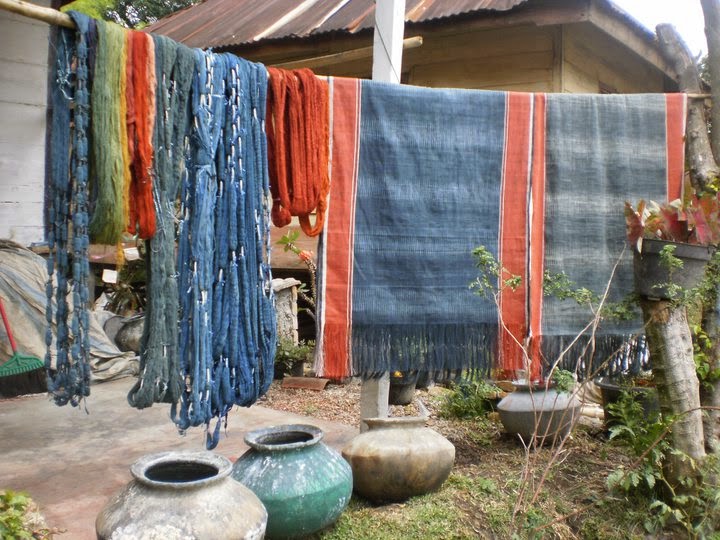 Posted by Sandra at 07:35 No comments:
Labels: Restuala Namora Pakpahan 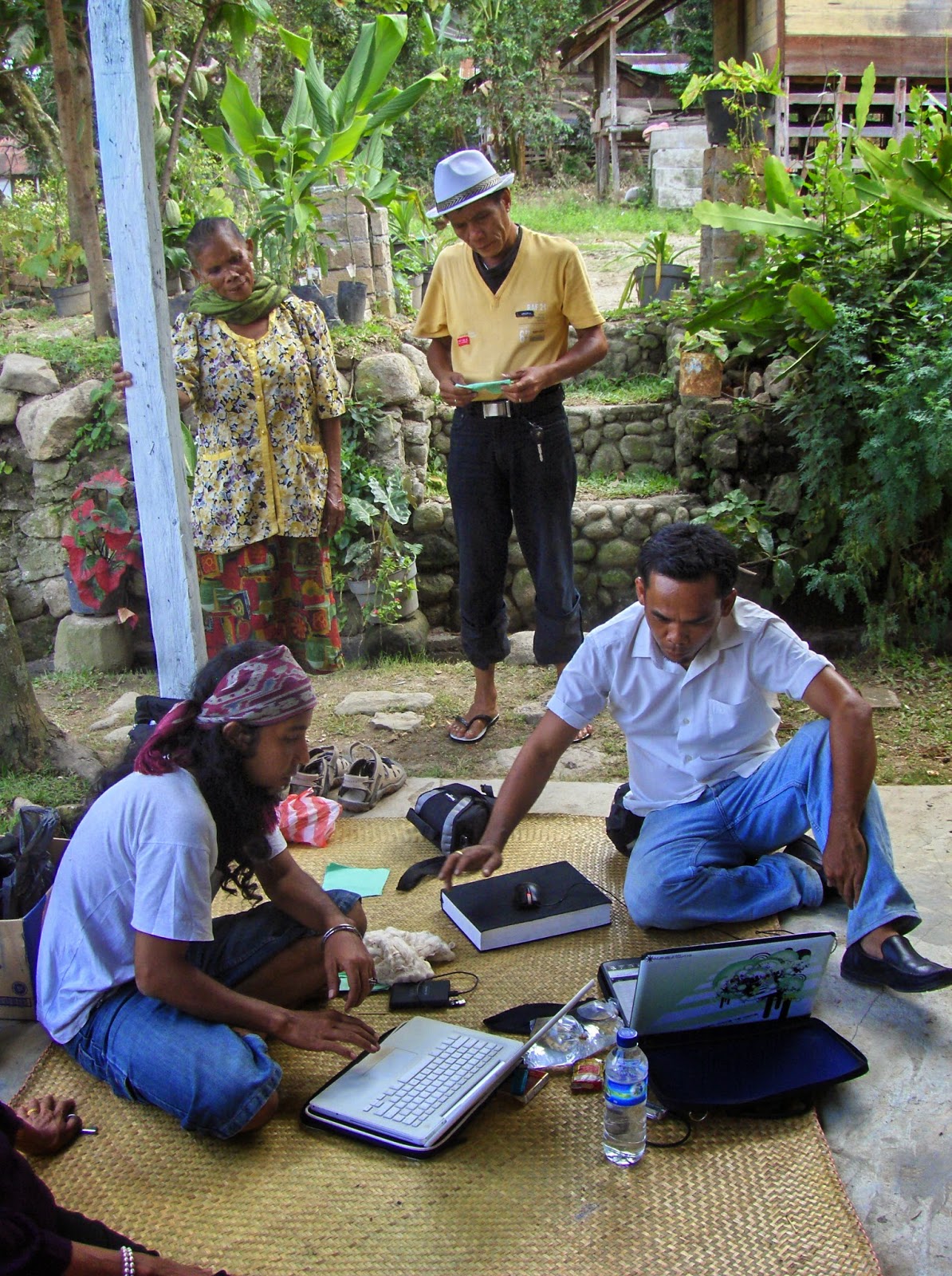 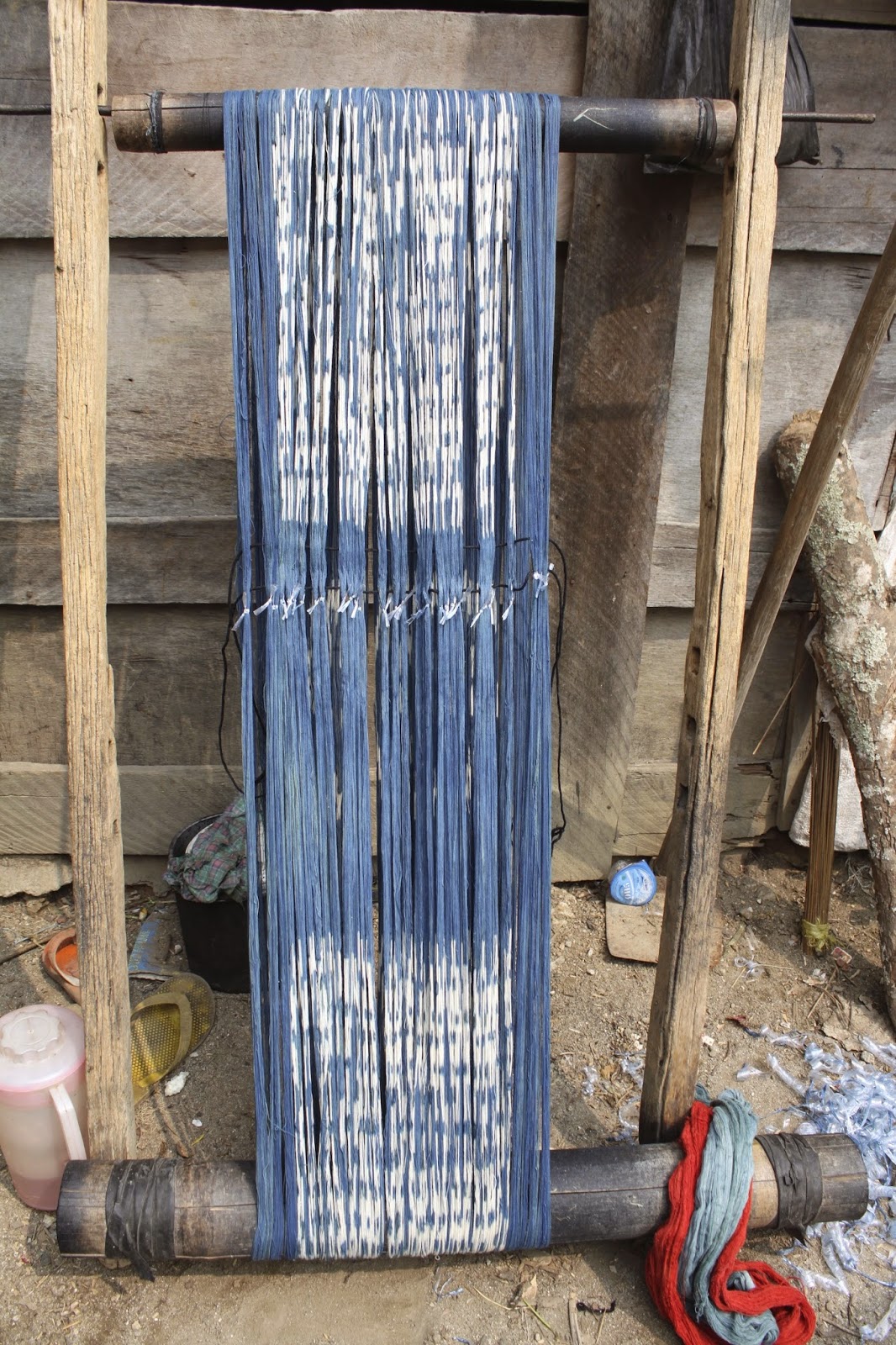 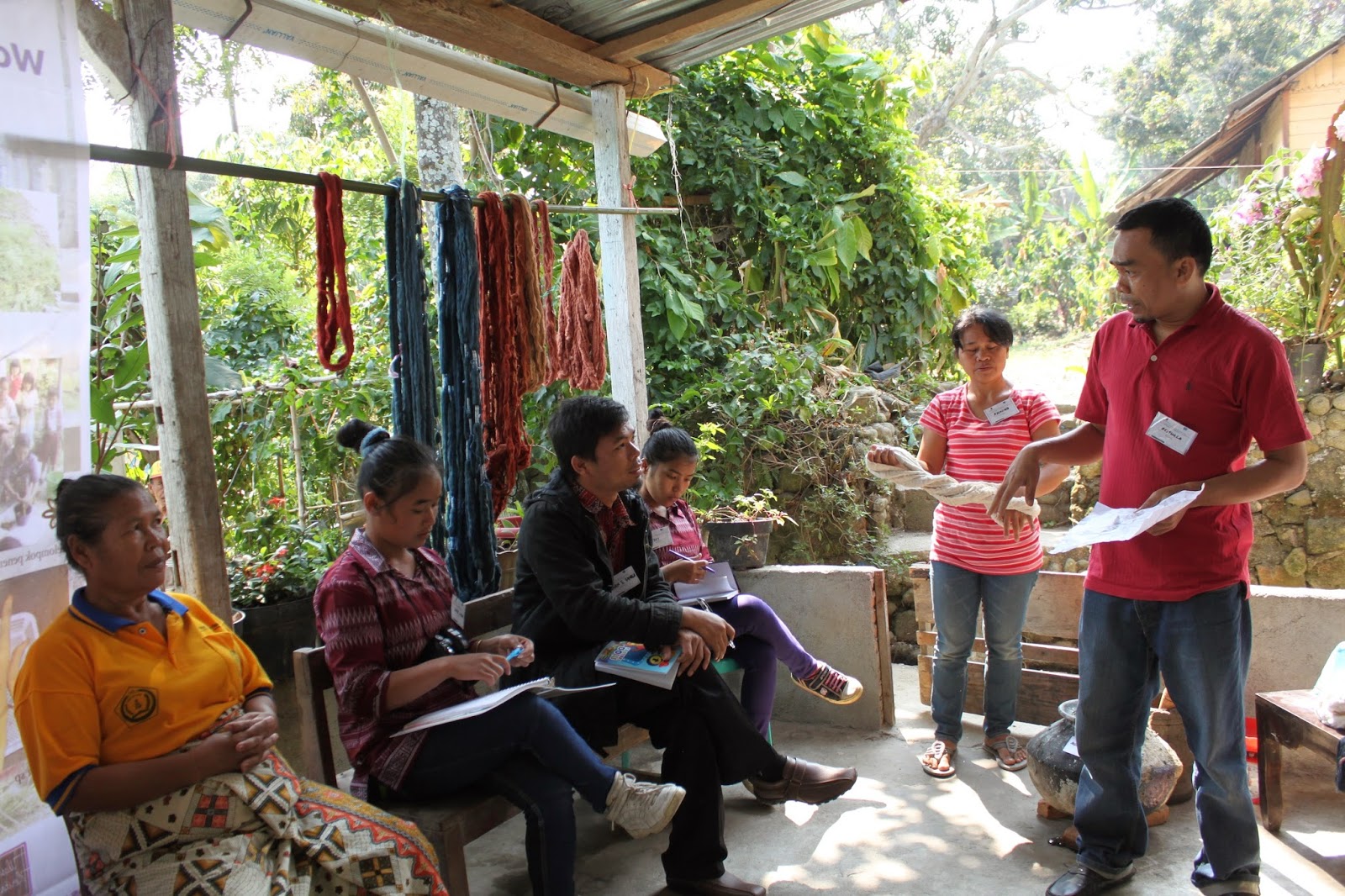