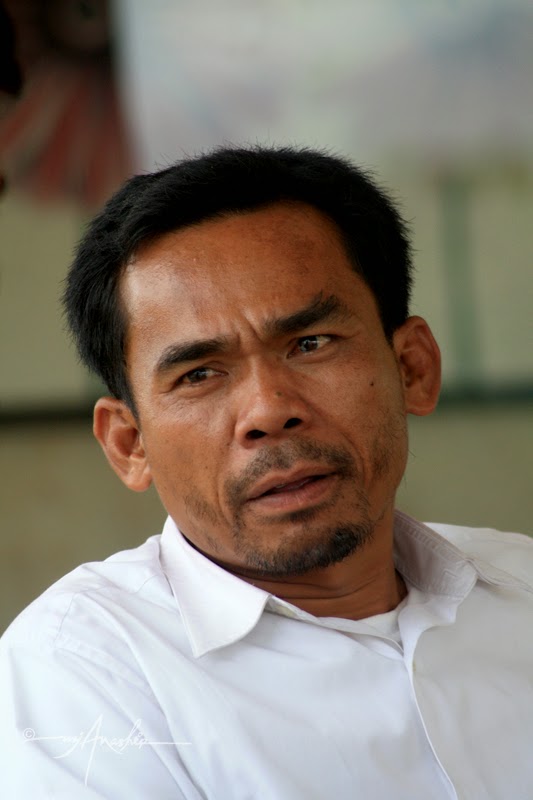 Restuala Namora Pakpahan has passed from our midst (July 2014). The last time I saw him he was sick but I had no idea that his illness was so serious. He led a weaving workshop in his village in Muara for my Batak daughters, Febrina Pakpahan and Lasma Sitanggang as well as participants from Del Highschool. He paid special attention to Batak natural dyes. During the workshop, he reiterated his future plans. His home would gradually be transformed into an oasis for people wishing to learn about, and make, traditional Batak textiles.

Restuala had a vision and he had nurtured and grown that vision for years. He had left Jakarta pointing out that Muara was a paradise: mountains and sea and fertile land, beautiful views, wonderful people. No place on earth was better endowed. Why would he want to live this life in Muara na uli (Muara-the-beautiful) for traffic jams in Jakarta? On the other hand, why was Muara so poor? It had enough potential! Restuala decided to dedicate himself to realizing that potential, also so that the young people would not have to leave in order to be able to make a decent living. But where to begin to realize that potential? Restuala searched. He talked to many people. He knew the lay of the land and had his fingers in many pies. In the end, he decided to invest his energy in Batak textiles. They would be the starting point. They were, afterall, the spiritual core of Batak culture.

He set to work motivating the weavers in his village. He took them to visit “Threads of Life” in Bali, an organization that could teach them about quality in textile production and natural dye recipes. His initiative fired up his neighbours with energy and they too gained a new vision of what a better future could hold. Back home, he invited the weavers to rekindle natural dye production and they started to weave textiles dyed with natural colours.

That is why I brought Febrina Pakpahan (from Kaban Jahe) and Lasma Sitanggang (from Simalungun) to his workshop. I wanted some of this vision and expertise to rub off on them. This vision is so badly needed in Tano Batak.

My sadness at Restuala’s passing is deep. His loss is too great to fathom for his new beautiful and dear wife Julia Astartini and his little daughter, for his family and village, for all Batak weavers and all of Tano Batak. My thoughts go especially to his family and his beautiful mother who supported him in all that he did. Restuala felt like a part of me. He was doing what I could not do as an “outsider” to the culture. By nurturing his dream he gave me hope and a feeling of calm. I believed in his capacities, his motives, his passion and especially his vision. Restuala was still so young. We all assumed he had a long and very special road ahead of him. We depended on him for walking down this road.
I mourn Restuala’s passing. I will miss him, his special laugh, his gentle style, his bright insights. I have many fond memories associated with him. He set up an extraordinary weaver workshop in Muara to thank me for Legacy in cloth, Batak textiles of Indonesia and he assisted in every way that he could with the film that I made with MJA Nashir, Rangsa ni Tonun. My sadness is great thinking of talented young people like Ishak Aprianto Aritonang whom Restuala inspired. Ishak, in turn, stood by Restuala with all of his energy and dedication. My sadness at Ishak’s loss is endless but I am also glad that Ishak was infected by Restuala’s vision.

We must mourn Restuala’s passing. After that, we must pick up the torch and carry on where he left off. His vision deserves to be nurtured always and by many people. His passing has created the space for new leaders.

Dear ito Restuala. Rest in Peace. Thank you for all that you gave us. Your gifts were beautiful and bountiful. Goodbye dear ito. I will miss you always.