My friend Ailsa Kay is at the Weaving Centre now. She is generating hope and happiness!

The day after she arrived, the women in Lasma's family all gathered to help her learn to weave. They posted pictures on Facebook, a sign of their intense excitement: they wanted to tell the world! For the occasion they all donned the  'bulang' headcloth, something that they have only ever done once before (when tourists visited). They clustered around Ailsa solicitously showing her how to stiffen the warp yarns with starch in preparation for weaving and they let her do it. Because they don't share a common language, the Simalungun girls are thrilled to be practising their English (with the help of Google) and Ailsa is no doubt learning a few words of Simalungun and Indonesian.

On the face of things, it may seem a simple matter to receive a visitor. For us at the Weaving Centre it is a Very Big Deal. For years, now, we have been working on our building, and specifically the Guest Room, to bring it up to the minimum standard that a Western visitor can expect. Our challenges have been significant, most of which fit under the heading 'Poverty'. Povery influences hope, will, knowledge, aspirations and belief in the future.  'Why would anybody visit the village?' the locals ask. It is ugly, and slummy, strewn with plastic garbage. So why would they devote time and money to a pipe dream of having visitors come? The charm the village once had was lost when people migrated from the ancient location beside the stream with the traditional architecture and built shacks along the road where they had better access to electricity and transportation. The village has lost its soul and is in disarray. The inhabitants are in basic survival mode. Bare, minimal survival occupies all of their time and thoughts. In some sections, clusters of families share a single toilet. Running water in a kitchen is a luxury dream. Hygienic standards cannot be upheld. The number of suicides is high though I don't know the rates. All of the farmers struggle against a system that benefits the middleman and the market but not them. How can they possibly believe that their weaving arts are of any importance or that visitors would want to visit their village to learn about those arts?  They themselves have learned from bitter experience that the market won't support their work. Besides, how could they possibly accommodate such a visitor? For them it is all a very far-from-their-bed scenario.

That is where my role comes in. I encourage, facilitate, discuss visions, allow myself to be laughed at and sometimes scorned; my motives invite incredulousness and inspire distrust -- and I plug on, trying to to keep their weaving arts front and centre in my thoughts, and hold onto the conviction that one day...one day.... the skills in the village will be universally treasured. If only we can keep those skills alive in the meantime! 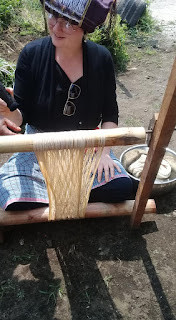 Enter Ailsa! Is she the first Western, white woman to ever sit down and learn to weave in Simalungun? I have never heard of another doing that. I think that she is making history! She is generating pride, hope and new visions of the future in the weaving family. They have allowed me to persuade and lead them all this way in preparation for her visit, on condition that I bear all the risks. Will Ailsa's visit re-kindle belief in their beautiful weaving tradition? Will they take on the dream/goal of having it survive? Will they assume some initiative and dedicate themselves to that dream? To what extent can and will that dream support them? The future is filled with so many unknowns...will global warming smash all of our dreams? ... I have no recourse but to struggle on, undaunted, with hope, no recourse but to believe in a supportive future. Otherwise I would give up.

Ailsa is my dear friend, my guest, and dare I say it? a little bit of a guinea pig as well. She has listened to my stories about the Weaving Centre for years. She is well-travelled, balanced, and an anthropologist. She was ready for the adventure. Our fingers were crossed.

In preparation for her (and those following her!?) Lasma's husband, Pak Sandi, (at my behest and cost, of course)  installed running water in the kitchen, built a strong bed frame for the mattress, had the bathroom tiled, and has begun to grow organic vegetables on our grounds. We have a loom for guests, and sufficient yarn, and now that the gardening season is tapering off, Ompu Elza is willing to put on her other hat of 'weaving guru'.

Lasma is playing House Mother, Agustina is interpreter, story-teller and warm companion; all are helping out in their own way. (The two sisters shot the video accompanying this blog.) My friend, Ailsa, is playing along in a warm and communicative way, suggesting strategies to make the guest room more homey and conveying what her 'fresh eyes' see in what we have done and its potential.  She is happy to contribute in her way to making the weaving centre into a 'real' craft Homestay. Already they adore her and she is being taken up in the RBTS family.
It is working like magic. This evening Lasma called me and showed me the fire they had built to roast the organic corn just plucked from our land. They were enjoying the warmth of the flames, laughing and singing. The scene touched me. It was nurturing -- and I hope sustaining for all of them. They are all searching for their direction in life.  Sitting around the fire they were sharing and finding comfort and insights by being together. Differences of language were being bridged and the interference of outmoded concepts that have broken up the common humanity of North and South were rendered irrelevant and absurd. It crossed my mind that perhaps precisely this is what the Weaving Centre may  really be about: bonding, mutual understanding, linking North and South, making the unlikely possible, finding a shared direction. The envisioned future may never come, but we have had this moment, precipitated by the precious weaving tradition of Nagori Tongah. It will last forever. It makes me feel richly satisfied and filled with joy.