It takes a (global) village...

Yesterday I had the good fortune to take part in a workshop at the Textile Research Centre in Leiden, The Netherlands. The TRC hosted weavers from Sintang, Kalimantan (Koperasi Jasa Menenun Mandiri) who gave sold-out workshops to people from all walks of life interested in indigenous techniques. They have been at it for two weeks now, teaching dyeing, ikat, basketry and beadwork.

The workshops I attended were fun: women toiling together and in no time  sharing their lives and perspectives. Like classic sewing bees and quilting parties.

The lead Dayak weaver, named Salo Mina Mapung, a 56 year old grandmother, did that too. We learned that she was the engine behind the revival of weaving in her West Kalimantan district. There are now 300 weavers who are earning a living and supplementing family income through their weaving efforts.

In 1993 Salo Mina Mapung was given the opportunity to go to Jakarta to demonstrate her weaving skills. That changed her life. She glimpsed an opportunity and when she went back home she decided to rally other weavers to take advantage of external markets for their weaving.

Salo Mina Mapung was proud of her accomplishments, certainly, but she was also a modest and honest woman. 'Whenever I have the opportunity to speak,' she said, 'I always thank all the people who facilitate our success. Without them, we could not achieve what we do.'

She was talking about people like Dra. Siti Musrikah, local head of the Cultural Department, who accompanied the weavers to The Netherlands, people like Gillian Vogelsang-Eastwood, the central motor and founder of the TRC who went to the effort of bringing the weavers to The Netherlands, and others who have taken them to Jakarta to do exhibitions and so on.

I listened intently to what she was saying. It was a confirmation of my (stolen and adapted) adage: It takes a global village to keep a craft tradition alive. You cannot expect the people who are poor and often demoralized, lacking knowledge about markets and the outside world, without good internet linkages and skills in non-local languages, to successfully shoulder the full burden of keeping their craft vibrant. They are not in a position to do so. They simply do not have the resources. 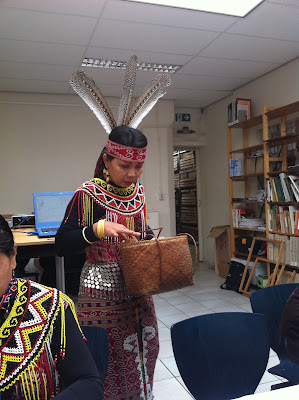 Salo Mina Mapung was clearly a born leader and a born teacher, patient and kind. I sensed that her internal engine was quiet, strong, steady and dependable. These capacities sprang to life when facilitators linked her to markets, people and institutions outside her area. She lives in a poor and  isolated region; its cultural seeds had fallen dormant. The facilitators she mentioned served as water for the seeds and now the craft in Salo Mina Mapung's village is blooming. I also sense that the attention that government, NGOs, aficionados, Church and other institutions are paying to these craft experts must continue or else their skills will once again lapse into dormancy.

I came away from the workshops with some insights into basketry and beading but especially with the confirmation that motivates me to combine know-how and resources from the North with know-how and resources from the South. This was the essence of the workshops at the TRC and this is the essence of my vision for the RBTS, our weaving centre in North Sumatra. I am convinced that the two halves of the world will benefit mutually from joining forces, that we need each other in essential ways.

Demonstration of the stages of ikat. This was done in miniature. 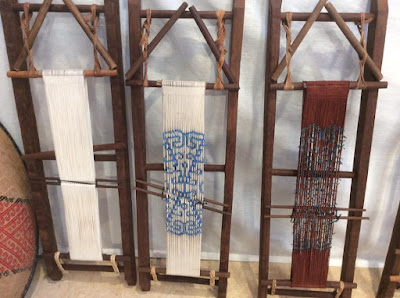 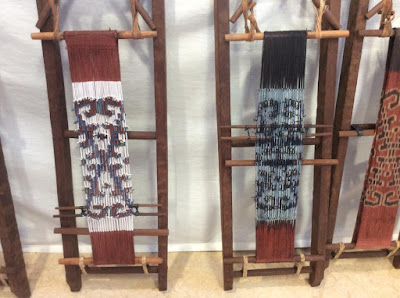 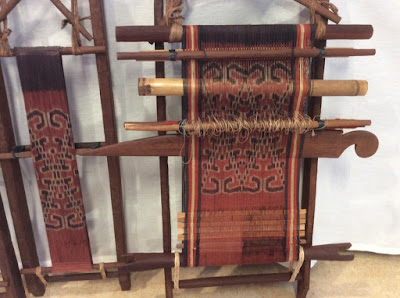