The Music of Weaving

When I learned how to weave from Ompu Sihol thirty-one years ago, she introduced me to some of her music: a song or two with words relating to the weaving process and the mouth harp that she played when she was tired of weaving and needed a little diversion. During our travels to make the Rangsa ni Tonun film, I asked every elderly (former) weaver whom we met if she knew any weaving songs. My enquiries didn’t unearth a single melody, for whatever reason. This is another loss that can never be recovered. It makes my single scratchy recording of Ompu Sihol singing what we have come to call 'The Weaving Song' so very precious.

Threads of Life sent me for a brief two-day trip to Timor to meet up with some of their weaver groups so that I could see first-hand how they operate in the field. Their Timor field staff, a delightful Atoni man named Willy, was my guide and he introduced me to a great deal. His insights and stories made the experience especially rich. I was excited when he told me about the importance of rhythm in Timorese weaving and how it had become the basis of a music tradition.
﻿ ﻿﻿
There are rhythms with an audio component such as when the Morinda citrifolia bark is pounded in the large stone or wooden mortars: thump, thump, thump when the dye is being prepared. There is the sound of the weft being beaten in, not just the sword against the newly-thrown weft, but also the reciprocal clack of the warp beam against the upright posts anchoring the loom. He mentioned others as well. I knew that I was hearing about the origins of music in the percussive sounds of simple wooden tools. Melodies and collective merriment were built around them, the task of the weaver being not the lonely job that it often is today, but something engaged in by a joyful community of artists also sharing the spirit of song.

When Jean Howe took me up to a visit I Wayan Karya, a charismatic Balinese who has revived the natural dye tradition in Seraya, an eastern part of Bali, I was inspired by my Timorese experience to once again enquire about the music of weaving, mentioning Ompu Sihol’s use of the mouth harp. He enthusiastically affirmed that the mouth harp had also been used in his village. His father was a great aficionado. Pak Karya clearly remembered the tunes that his father would play in the dark before turning over and going to sleep, and he mimicked them with fervour.

Because Pak Karya made red dye (which we had failed to find in the Batak area) and because Bali has a cotton gin identical, except in a few decorative embellishments, to the Batak variant, and because there are still spinners in Bali, I called my filmer, MJA Nashir, to join me in Bali in the hopes that we would be able to fill some of the remaining gaps in our film. When I went a seond time to visit Pak Karya, this time with Nashir, I brought two mouth harps with me. I had found them in a music shop in Ubud! (I stored one for Mas Nashir to bring back to the Batak region. We hadn’t been able to find one there.)
﻿﻿
﻿﻿Pak Karya snatched the one with the pull-cord and immediately began to play it, laughing in glee. He set to with his knife to perfect parts of it so that it made a larger and sweeter sound. Then he passed it on to his ageing mother, who was also a skilled player. A visiting neighbour said she still had one and she cajoled a child to fetch it for her. Finally we had what Ompu Sihol had talked about: two people playing a two-part mouth harp melody. It transformed the mood around the looms to one of gaiety. I was so thankful that Mas Nashir was there to film it.
I was inspired to enquire whether there were any weaving songs (left) in Seraya. At this point, I don’t even dare hope to find them, but to my surprise and elation, there was another neighbour who knew one. She installed herself in the loom and sang in dusky, wavering tones that were reminiscent of traditional Javanese song. Mas Nashir also taped this song while the eyes of the singer glistened with pride at the attention that she was receiving.  (TClick on the film to hear the music!)

I felt a return of the longing that frequently rises up in me: oh, to have several lifetimes! I would spend one of them wandering around the world looking for weaving songs.

After our musical interlude, Pak Karya said that our visit had convinced him to henceforth also dish up music for the tourists visiting his weaving centre. His bright new sign is already standing monumentally on the side of the road, his tidy little shop is built and gracefully proffers hand-woven, natural-dyed cloth, and there is a covered-over area made of bamboo where his weavers sit together to produce the textiles for his shop and demonstrate their skills. His natural dye workshop is situated higher up the hill, behind the wall encircling his compound. The wall is the first element of a planned guesthouse. Pak Karya is dedicated to reviving the traditional weaving of his culture and is turning it into his full-time business.

Before we left, we saw a group of small boys entranced by the mouth-harp music being played. One of them grabbed the simple piece of bamboo when the woman laid it down and tried it himself. They all began to mimic its distinctive vibrations. I have hopes that the attention that we gave to the songs of weaving may indeed contribute to their revival in Seraya. A more fulfilling consequence of our visit could scarcely be imagined. 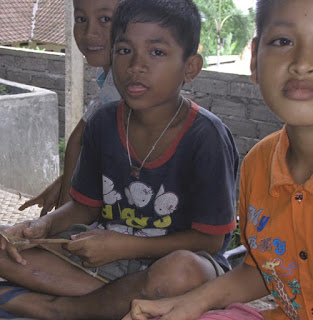