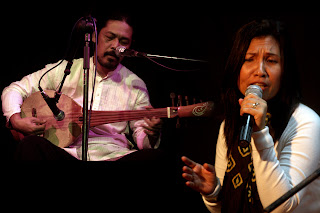 MJA Nashir has just completed a short video about the Theme Song for our film, Rangsa ni Tonun. Watching the video, it is impossible not to fall in love with the music and the way Suarasama, the renowned music group in Medan, has arranged and performed it.

The little ditty that Ompu ni Sihol sang for me in her cracked and quavering old voice the last time I saw her was magical for MJA Nashir. That he took the tape recording to the husband-wife team, Irwansyah Harahap and Rithaony Hutajulu, the two founders of Suarasama, was a stroke of brilliance. That they have done so much with that little recording is a testament to their love of the melodies that used to be so much more prevalent in the Batak villages. Batak music in the villages is disappearing.

I first really spoke with Irwansyah and Rithaony in their home in Medan in 2010, also a meeting instigated by Mas Nashir. We had just completed our Pulang Kampung journey and the idea of the film, Rangsa ni Tonun, had not yet announced itself in my mind. That first conversation was as memorable as it was inspiring.
My Indonesian was still so rusty that I had difficulties following it, but the gist of it brought me back to my passion for the study of Batak culture while I was a graduate student struggling with my dissertation. I had been struck by the coherence of the culture, how the same structures of thought express themselves through different cultural media. My dissertation was an exploration of concepts of time and space found in Batak literature, architecture and, of course textiles. And now here was Irwansyah explaining how he found the same thought structures in Batak music. I was tremendously excited. We talked about how it would be possible to bring these complicated but beautiful ideas over to the Batak youth and mused about doing it through performance that would intertwine the same themes through different media. I know that we had re-invented the source of ritual. That is what the great Batak rituals were about! They gave coherence and reason to all of life. Might these same ideas be the wellspring for the perpetuation of culture in the modern arena? What is ritual in the modern day? An opera or performance? Ritual without the participation of all, ritual as presentation? I still look back on that conversation with longing. The realization of what we talked about remains compelling. I hope that we will someday create the opportunity to do something with that seed. It would be a great honour for me to be able to work so creatively with this professional, dedicated and very gifted couple.

Suarasama’s work on Ompu ni Sihol’s ‘The Weaving Song’ took place primarily when I was in Holland, again under the guidance of MJA Nashir. I was fortunate to be able to attend one of their practices when I was back in North Sumatra – Nashir video-recorded that happy moment. Words cannot express how deeply satisfied and thrilled I was with Suarasama’s product. 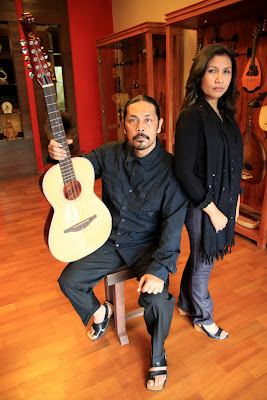 I should not have been surprised. I don’t know them well, but I do know that Rithaony and Irwansyah comb the Batak area looking for melodies that are disappearing. They record this music and store it. One day they will be renowned and thanked for what they have managed to salvage. They guide students in ethnomusicology at the University of North Sumatra and do what they can to stimulate Batak youth to learn their musical tradition. Both are qualified ethnomusicologists and professional musicians. Rithaony used to sing for Opera Batak. Irwansyah encourages the making of indigenous instruments; the environment where we spoke on that memorable day was clad with his collection of musical trophies. The Suarasama team includes other top musicians. Together they make beautiful recordings that are known throughout the world.

And here are some things written about them in the media:
http://www.villagevoice.com/2008-08-12/music/suarasama-s-tour-of-indonesia/full/
http://insideworldmusic.blogspot.nl/2008/12/cd-review-soothing-sounds-of-suarasama.html

I have asked Suarasama to join us on the Boat Budaya and they have not turned me down. We are still discussing logistics and possibilities. I would be so honoured by their participation and I know that, if they are able to join us, they will be motivated, just as MJA Nashir and I, by their love of Batak culture. I hope that the Boat Budaya will also represent an opportunity to teach music to the youth on board and to inspire the Batak in the villages to honour their musical tradition. I look forward to the music (all acoustic) wafting on the breeze over the lake to all the little villages nestled against the shores. Music carries so well on the water. It will announce our arrival and our event better than anything else ever could. And oh, it would be such a pleasure to sail with these traditional sounds. I know that there will be dancing on board. Nobody will be able to help themselves from standing up and joining in.
Posted by Sandra at 21:01
Labels: Boat Budaya, MJA Nashir, Ompu ni Sihol, Rangsa ni Tonun, Suarasama, The Weaving Song