Enter Sandra Sardjono. When she finished her PhD in 2017, she was quickly engaged by the China National Silk Museum to help with the preparations for their exhibition entitled,  'A World of Looms: Weaving Technology and Textile Arts in China and Beyond'. When she requested a Simalungun loom for the exhibition I said 'yes' on principle, little imagining the enormity of that to which I had committed myself.

There is a long and convoluted story to be told here.  Suffice it to say that the Simalungun Weaving Centre filled the museum request. It included the loom made by Pak Sandi, Lasma's husband, and a half-woven bulang textile made by Ompu Elza, Lasma's mother, in addition to a completed bulang for visitor enjoyment.  We sent everything off, on time, to China where it passed inspection and was mounted in the exhibition. To my endless additional delight, the museum used a photograph of Ompu Elza's textile to grace the invitation to the event.

Sandra sent me the images from China. By this time I was back in The Netherlands and I forwarded them to the Weaving Centre beside Lake Toba. 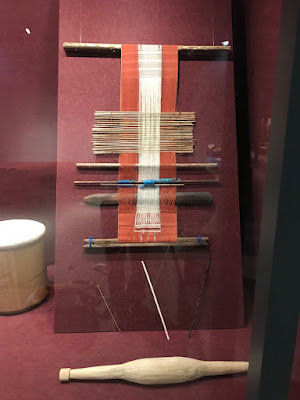 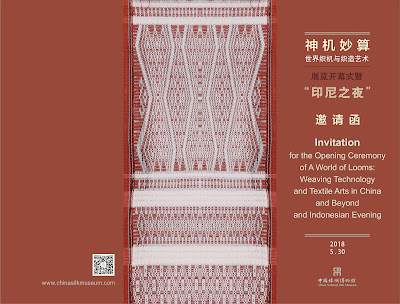 Enter Agustina Sitanggang, Ompu Elza's third daughter. She responded by telling me that Ompu Elza had been so touched that the tears rolled down her cheeks. Agus had to wipe away her own tears as she wrote, and so did I when I received her words. The whole family was moved and so proud of Ompu Elza. Everyone was moved to tears. Ompu Elza is a dedicated, hard-working, modest and undemanding person with low expectations of life, who has dedicated her adult years to her   family. "This is the first time that I
have felt valued for my work," she said. She savoured a feeling that she had never known before and from which she will be able to derive sustenance for the rest of her life.

Enter Pamela Cross, my friend and loyal supporter of the Weaving Centre. She too was hugely moved. "Will it be possible to use the museum images on a t-shirt so that her accomplishment can be celebrated every time it is seen and worn?"

Enter Mas MJA Nashir, photographer/poet/filmer/writer, dedicated to the cultures of his beautiful archipelago. He designed and printed the t-shirts in Pekalongan, with Pamela's support.  Tonight they will be sent off to North Sumatra.

I wish I could be there to see Ompu Elza's delight when she sees them and pulls one on.