On Wednesday 25 August 2021, I presented a webinar for the PanSumatra Network for Heritage Conservation (PANSUMNET), an informal group coordinated by Hasti Tarekat within the Sumatra Heritage Trust / Beranda Warisan Sumatra (BWS). The event was moderated by arts and culture activist, Desmond W.S. Anabrang. 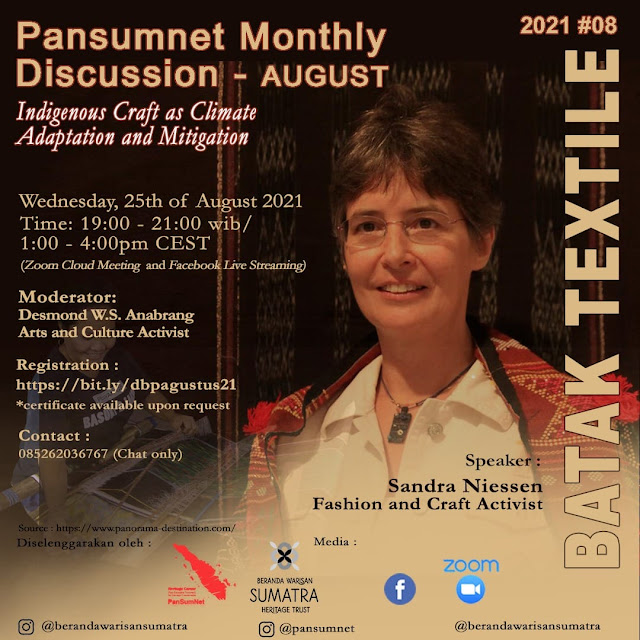 My goal was to bring the topic of global warming into focus relative to craft and heritage. On August 9 of this month, the 6th report of the IPCC report came out and was heralded as a 'Code Red for Humanity'. My talk was based on the comment made by Helen Clarkson, CEO of the Climate Group, that from now on,

“Every decision, every investment, every target, needs to have the climate at its core.”

So what does this climate 'code red' mean for heritage and craft? I proposed that this should become a focus of conversation and that it is incumbent on each aspect of heritage to work this out. UNESCO has already done significant work in this direction. It is all hands on deck. While the Northern Nations shoulder the burden of reducing greenhouse gas emissions (GHG), I pointed out that there was a leadership role that could be assumed within Indonesia because of the wealth of Indigenous Knowledge that is found in the country -- and that this wealth should be treasured and encouraged, that this incredible asset is undermined by so-called 'development' and 'capitalist growth'.

My example was traditional Batak textiles, which I likened to honey: a valuable product collectively produced from the local environment, healthy and dependent on a healthy local environment. 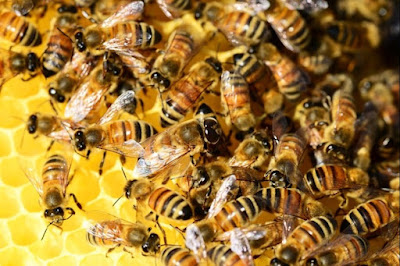 I showed the modernization of Batak textiles in the light of CO2 emissions and fossil hydrocarbons. If the traditional textiles were carbon negative (they stored CO2 in their materials and the weaving equipment), the modern textiles have been entirely transformed by the availability and prevalence of fossil hydrocarbons, through the use of synthetic dyes, yarns, and fossil fuel-based transportation. In the end, this has meant that the only 'heritage' that has been preserved is the appearance (design) of the textiles, not the material and not the systems which infused them with meaning before they became a 'cultural commodity'.

I placed the blame squarely on the shoulders of social changes that have occurred since colonialism and pointed out that the reliance on fossil fuels will have to be relinquished.

There will be no choice.

The Webinar was live streamed on Facebook but the link cannot be used in this environment.

A copy of the presentation will be made available on the BWS website.

Thanks to the talented MJA Nashir for the poster image and to the dynamic BWS and PANSUMNET for organizing and hosting the event. Thanks also to the warm, enthusiastic and very engaged Indonesian audience.

I have just watched the recording of a webinar by Bill Rees to the Canadian Club of Rome, entitled 'Too Clever by Half, but not nearly smart enough: why societal collapse is increasingly probable'. William E. Rees is the brain behind the Ecological Footprint model that has caught on around the world as a way of measuring our impact on the earth. He showed a remarkable slide, which I screenshot and present here: 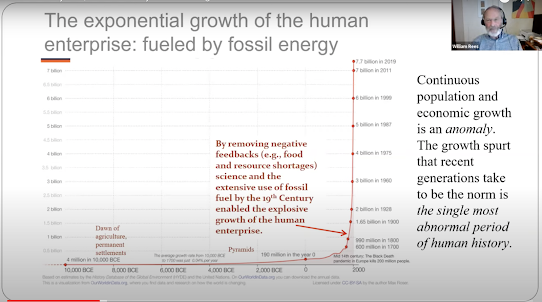 If I have discussed the impact of the availability of fossil fuels on Batak textiles, this slide shows the macro impact on world population and economic growth.  No graphic could have better revealed that Batak textiles are in step with the world trajectory and out of step with the carrying capacity of the earth.

This slide, if you can read the small print at the bottom, is "Based on estimates by the History Database of the Global Environment (HYDE) and the United Nations. On OurWorldinData.org you can download the annual data. This is a visualization from OurWorldinData.org where you can find data and research on how the world is changing."