I lived in Hutagalung for 8 months in 1986. A colonial house in that little village filled with drying rice was my pied-á-terre. Not surprisingly, I had various presentations of Legacy to make in the village and was not able to fit it into the 15th of June. I was able to return again on June 23rd with my photographer, MJA Nashir.

Nai Ratna had been my closest neighbour (see pages 157 and 472 of Legacy). She wove the side panels for one ragidup textile type each week. When her two daughters came home from school, they wove the centre panel. Diligent and precise workers, they supported themselves through school in this way. Hutagalung is known as the “ragidup village”; that cloth type is its specialty. Everything I learned about the techniques used to weave a ragidup (e.g. p. 490-491), I learned from this family.

Nai Ratna was at home when we visited. She was old now and she had “retired” from weaving. One of her daughters, Monna, was still living with her. She had married a man who had learned how to make tofu and together they had gone into business becoming the biggest tofu producer in the valley. Their operation was located in the back of the house. She no longer wove, either. 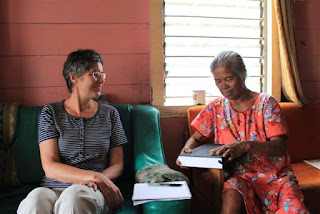 Our visit was brief but light-hearted. Nai Ratna and Monna were happy to receive the book courtesy of Tomas Murray who expressed great pleasure at being able to give something back to the people whose textiles he admired and enjoyed so much. 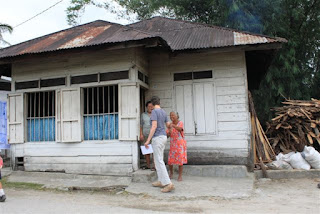 And then we took a tour of their tofu-plant, alas so much more lucrative than textile-production. But they are doing well with their business and I am happy for them.

Nai Arta lived a few doors down. I didn’t know her well. I remembered her as being shy, diligent, poor, working until the wee hours on her ragidup sisabulung using the light of an oil lamp -- and rubbing and complaining about her sore eyes. When we peered in on her, she was weaving the centre panel of a ragidup (not a ragidup sisabulung; she only did that on commission, she explained). She looked very well and she was wearing glasses (perhaps that had been the problem, so many years ago). Her adult daughter who was with her also looked hale and hearty. I felt relieved to see this. 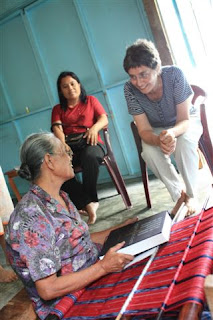 Nai Arta was overjoyed with the book and her face was wreathed in smiles. I explained to her that my former professor, Shuichi Nagata (University of Toronto), had selected her specifically as the recipient of his gift. He wished her well, especially hoping that her eyes were handling the strains of weaving. His message touched her. 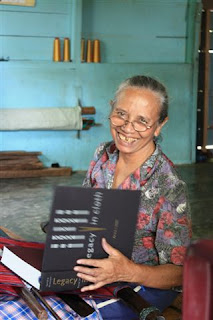 It was a memorable transfer for me, as Professor Nagata had introduced me to Batak ethnology during my Master’s year at the University of Toronto. He was my first guide on the path that culminated in Legacy in cloth and with this visit.

Nai Ganda’s house was a few villages deeper into Hutagalung. I had spent endless hours with her (pages 86, 156 and 442 of Legacy). Her store of knowledge seemed to have no limits. In addition, I had always admired her strength. Her lot in life was not easy, but she was always positive and cheerful. It seemed to be a decision and a discipline. She was hard-headed and she worked very hard. As an ikat-maker, she remembered the lessons she had learned from her talented and knowledgeable mother-in-law and frequently referred to her as the most important source of her own knowledge. Now she had become old and she didn’t recognize me until she peered into my face in the light. Then her greeting was so warm and dear that I felt my tears come. I was so grateful that I was able to meet with her once again. Her husband was also still alive and we all sat together in the front room. 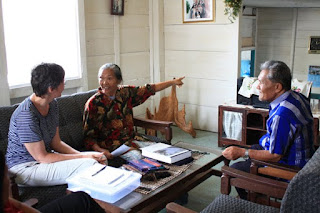 It had been refurbished. Nai Ganda produced an old photograph that reminded me of the way it had been. I was sitting at a low table writing down the information that she was giving to me. I had no recollection of the photograph and wonder who took it. Mas Nashir made a copy of it for me. Nai Ganda also had old letters that I had sent her, and a copy of my PhD dissertation that was well thumbed through. 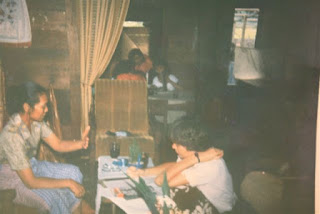 the old photo of me writing down information from Nai Ganda

Nai Ganda was one of my most precious contacts and so I had suggested that my mother donate her gift of Legacy to Nai Ganda. I know that this was meaningful to Nai Ganda.

We went through Legacy together and talked about her textile design experiments; she was curious to see which ones I had put in the book (pages 201, 277, 409) and she pulled out several more to show me how her thinking had developed. She was older and she no longer wove, but she hadn’t changed. I have given her my book, but I don’t think that she could ever know how much I appreciate and care for her. 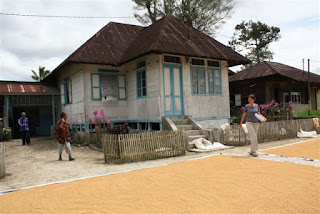 
See Back to the Villages - the map!
Posted by Sandra at 20:03
Labels: Hutagalung, Legacy in cloth