My friend and webmaster, Pamela Cross, asked me upon my return whether I look differently at Legacy in cloth now that I have taken it to Indonesia. The answer is an unequivocal “yes”.

I remember how anxiously I lived towards the first presentation of the book to a Batak weaver. I had talked up my Back to the Villages project for so long and had received so many donations. I felt that alot was at stake. To many people the project seemed a bit strange given that the book is in English and not yet translated (I brazenly write “yet” because I am immodestly convinced that it will only be a matter of time). I believed that the book would be of use to weavers because they can read the photos better than anybody else, and because they need and deserve a pictorial record of their repertory. Anything I could write or say would, relatively speaking, be of less importance. How relieved and gratified I was when the book was received by the weavers with such intense interest and appreciation.
One of my favourite illustrations of this happened in the Silindung Valley, in the twining village of Sait ni Huta. When we pulled up, there were several women of all ages twisting fringes and twining edges in front of their homes. I selected one person to sit with and gradually more and more villagers clustered around us. Because of their weaving speciality, I opened the book to the pages of twined patterning (pp. 526 - 528) and watched them react. They immediately pointed out the patterns that they were familiar with, fetched textiles out of their homes to show me modern edges that are not represented in the book, enquired whether I had illustrations of beadwork as well (luckily, I did - p. 530 – taken in their village!) and discussed the differences between their work and that of their colleagues in Laguboti (near Lake Toba) and Kaban Jahe (Karo Batak area). The discussion was animated and enthusiastic. 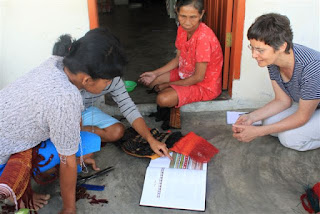 On a whim, I showed them the twined bag on page 406. I was so curious how they would react to this rare and old bag. None of them had ever seen one and at first they doubted that it could have been twined. Then they started offering suggestions as to how it had been made. If the conversation had been lively, it was now almost a brawl with alternate, competing suggestions but nobody had the courage to take me up on my offer to pay for a replica of the bag. When I left, they still had not yet come to a conclusion about how it had been made. I realized that they needed more detailed photographs of the bottom of the bag and visual proof that it had not been made flat and then stitched up the side. But I didn’t leave discouraged. I thought, “They invented this bag once in the past and they are clever and skilled, so they can re-invent it or devise something entirely new.” I left them with the book and in the knowledge that they had enjoyed the puzzle. 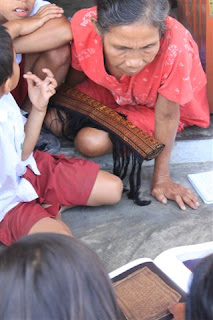 What I don’t know, however, is whether their pride was bolstered by the book. For the most part, they don’t know much about books and what a major undertaking Legacy represents. It could be the implications of this book won’t sink in until later when they have had the time to ponder the celebration of their art that the book represents.

My next step that day was the village of Parbubu where Ompu SiTohap used to live (p. 61). She was no longer alive and so her son and daughter-in-law received the book. I witnessed their happiness at seeing her in the book showing off her favourite textile (now in Jakarta, inherited by her daughter). Whether there was pride in her weaving skills and her being a representative of Batak weavers, I don’t know. 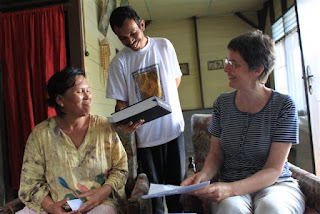 Time may provide the answer to this question: will weavers show off the book to prove their technical excellence? Will it inspire young women to take up the art and older women to once again try their hand at it? Will it spark the development of an exhibition or two? Will local politicians heed a new urge to acknowledge and display the works of weavers within their jurisdictions? Before I left The Netherlands to return to the Batak villages, an employee at the Indonesian Embassy paused for a moment while looking through the book, “I have grown up seeing weavers and textiles for sale at the markets; I just always took it for granted, but now I see that it has potential for tourism...”

I do not think that I made a wrong decision to give copies of Legacy to weavers and villagers who could never afford to buy it (even imaging they were ever able to find it on the publisher’s (KITLV) website!). The hunger for information in the villages alone means that the gift was useful. Will there be concrete outcomes to the Back to the Villages project? (No funding agency would support me in my project because I couldn’t demonstrate this.) I have to sit back and be patient, allow the books to develop their own life in the villages....Maybe the effects will never be measurable.
..............
In Medan, when the project was completed, I received a text message on my mobile phone from Ompu Okta (see blog “Dilepaskan”). She wanted to know what the title of the book was in Indonesian....Obviously, she was still preoccupied with her gift....