Immediately upon arriving in Medan yesterday (June 26), I grabbed a flight to Banda Aceh to visit a dear friend whom I met and often stayed with in Medan in 1986. I would come back from the villages tired, often sick, worn out psychically. She would patch me up and when I was ready, I would go back again. Yesterday, she commented that I didn’t appear to be thin and worn out and indeed I am not, but she is definitely patching me up again.In the evening, we spent hours at her home going though the photographs that Mas Nashir had taken during the past week and I shared many stories with her. This morning, I feel as though all the emotions stored up during the past month of intensive travels and meetings are pouring out. My friend asked me yesterday if there was anyone with whom I could share the pain of the loss of Batak culture and weaving in particular. Her question stands out in my mind. It reminded me immediately of the need of environmentalists to accommodate the deep and very unique pain of loss of quality in the physical world. As usual, she has made an astute diagnosis. And I am intuitively convinced that environmental and cultural pain are close twins.My journey back to the villages has been undertaken at a very special time. Many of the people whom I wanted to meet are still alive but most of them represent the end of the Batak weaving tradition. Either they have stopped weaving and dyeing, or they have nobody to continue their trade when they are gone. Throughout the past month, I have been trying to come to grips with this. What has changed? Why is this happening? Is a recovery possible or is it too late? What would a recovery look like? What are the avenues available? What will the future hold? Am I really seeing the end of it all? I know that my journey back to the villages has been historically significant. I am grateful to Mas Nashir more than I can ever express for documenting the journey in images. That he understood. That I could share it with him. It feels too big. My distress would have been so much greater had I gone back to the villages alone; I would not have been able to share it with anyone.I think of the anthropological reports and stories that I have read about the last representatives of Indian tribes. What did those singular, last members feel? How did they cope with their awareness?

I think of the weaver, Ompu Okta, Tihar Sitorus, that I met in Lumban Lombu. The fellow weavers in her village had already passed away. Her children did not learn her craft. She wove, all alone in her home. When she is gone, there will be nobody left there who weaves. She put her hand in mine while we walked to the exit of her village and we paused in front of the ancient Batak house on stilts, the only one in the village with gorga (painted, etched wood). Her parents had lived there and she had grown up there. We stood there and looked at the house and when I looked down at her, I saw that she was close to tears. How was she coping with the loss? “It is painful, isn’t it?”  I said to her. “Yes,” she said, “It hurts.” She is known for the excellence and beauty of her work. 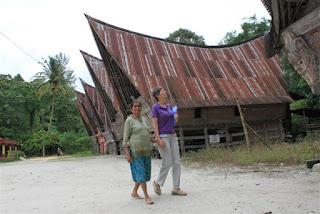 When we went back to visit her the next day, she asked me if I would like to sit in her loom. She showed me how she did putik, the counting out and division of the warp to make a throw of supplementary weft. My clumsiness was apparent to us all, but that wasn’t the essence of it. The essence was her longing to share her knowledge with someone. When we talked about the issue, I know that she hoped that I would be able to do something about reviving the art of Batak weaving. 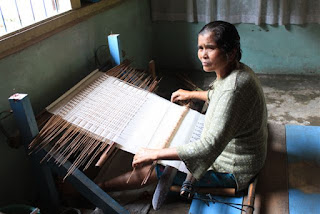 The last weaver in the village
Ompu Okta making the end field of the Pinunsaan. The sticks in the warp are all shed-savers.
Before our departure to the villages, Mas Nashir had introduced me to his friends, Irwansyah Harahap and Ritha Hutajulu, ethnomusicologists who teach at the University of North Sumatra. Ritha told me of their struggle – because it is a struggle against time – to gather indigenous melodies and instruments, to record performances of indigenous Batak music. In far too many of the cases, they were speaking with the last performers, singular persons, most of them old, who represent the end of the tradition. I did not know, at the time, that my findings in the area of weaving would be so parallel (although it makes sense; clearly, denial was easier to cope with). I do know that this time, walking through the rice fields, and when I went to sleep at night, there was no throb of the gondang (Batak ritual percussion orchestra) to accompany me in that mysterious way that I had accepted just as a matter of course twenty years ago. There is only the sound of vehicular traffic, in its own way a kind of deafening stillness. In many respects, the regions I visited are materially better off, but I saw that they had become culturally deeply, perhaps irrevocable, impoverished.Back to my friend’s question: with whom can the pain of all of this be shared? In a sense, I share it with everybody because we are all living this moment. In another sense, it can only be shared if it has been given a name and its dimensions have been sketched. I can share it with Irwansyah, Ritha, Nashir and my Batak weaver friends.Uppermost for me have been other questions. The elderly weavers tell me that young people have no interest in learning to weave and that the youth claims to have no capacity to do so. The weaver in Lumban Lombu diagnosed it by saying that they had no depth of concentration, were only interested in communicating by telephone and rushing around from here to there. The quality of time and concentration is different. Weaving requires intense focus and long periods of relative quiet. It is difficult work and you have to keep your wits about you. It is almost meditative; it is rhythmic; it requires patience; it reforms the physical body. I think of advertisements on the television and how they encourage human capacities that are exactly the inverse of those needed to be able to weave. I wonder what an advertisement would look like that would encourage people to love and enact their culture, and weaving in particular?I know that if I were to learn to weave now, at my grand old age of 55, I would never gain the physical skill of someone who had learned to work with yarn at the same time as they were learning to walk and talk. That physicality of weaving is lost within one generation. Batak weaving is at least 4,000 years old, but life today is demonstrating that it only takes the gap of one generation for it to disappear. It needs to be inculcated, integrated, woven together with daily life starting at an early age. This fact means that the Batak weaving tradition is dead. Henceforth, people interested and skilled in weaving will be able to manipulate Batak looms and make Batak textile patterns, but they will not be Batak weavers in the sense of continuing the tradition. They will be weavers who accommodate, in some ways, the Batak tradition. 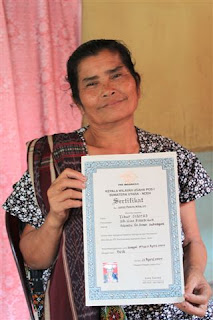 My weaver in Lumban Lombu repeatedly said that she was happy with our visit. She had a moment of optimism, proudly displaying the “diploma” that she had received acknowledging her expertise at a weaving demonstration in Medan. She pulled out the beautiful textiles that her mother had woven and was delighted to have them admired (she wanted me to put pictures of them in my book). It was a magical moment. How grateful I am to have experienced these moments. But the weight of them is heavy. I have been entrusted.

See Back to the Villages - the map!
Posted by Sandra at 15:32
Labels: Banda Acheh, Lumban Lombu, Mas Nashir