Didn’t pay? It was costing money!

In the fertile Purba region of Simalungun, yesterday, in the village of Negori Tongah, we found Roslina br. Purba’s husband by showing her laminated picture to some men on the road. 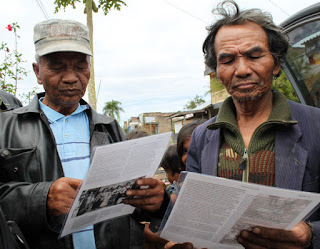 One of them turned out to be her husband and he led us to her. She had a large cloth on her head to protect her from the sun, a huge rake in her hand and a red wad of tobacco and betel nut in her mouth; she was returning from the ladang. I didn’t recognize her, but the driver of my car saw immediately that she was the same person as the younger version in the photographs.When she saw the pictures, she shook her head and said, yes, they were taken when she was performing the technique of warp substitution (tingki manuloki). I’ve stopped weaving, she said. It didn’t make sense, any more. It was better to work the land. 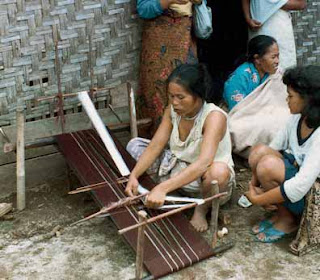 
I opened the back of the car and prepared to give her a book, a donation from my dear high school friend-for-life, Colleen Flood. It was the usual story, children gathering around, people jostling each other to get a look at the pages. The former weaver’s eyes sparkled. 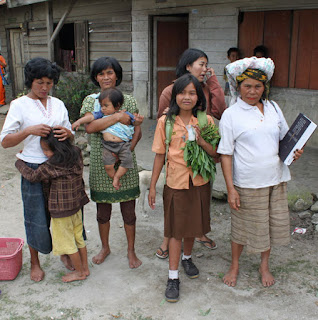 Roslina br. Purba holding her copy of the book with fellow villagers, June 2010
During the course of conversation, I mentioned that it apparently didn’t pay enough to weave. Her husband corrected me. It was not that it didn’t pay enough, it was costing money!

Later in the day, I had a happy reunion with my former assistant, Linda, in Parapat (and gave her a book privately in my own name). Her brother Jonny also came by. He had been a marketing co-ordinator for weavers in the Silindung Valley and nobody understands better than he the financial circumstances of textile production. He explained that the Batak people had become too poor to purchase their own weavings. That is why they purchased cloth commercially produced on a semi-mechanical loom when they needed one for ritual purposes. The consequence of this was that money was leaving the community and going into the pockets of the (relatively richer) directors of the commercial workshops – to say nothing of those on Java who are producing printed textiles resembling hand-woven Batak textiles.

I then understood the decline and death of weaving in the Batak area more clearly. It has always been the local market that has supported textile production. The foreign market, including the tourist market, though welcome, has just been incidental. If the Batak are not able to support their own production through their local markets, and the external markets are too weak, weaving is precisely as Nai Ati’s husband explained: an economic liability and no longer a way to supplement farming income.

We searched in the Simalungun region and found only one maker of the bulang textile type. She was old. She will not continue much longer.

Later in the evening, a young Batak man, Torang Sitorus caught up with me in my hotel on Samosir Island. He wanted a copy of my book. He had fallen in love with Batak ulos, he said. Prosperous in business, he was making a collection of ancient pieces. I could tell by the way he approached me that he had the skills to find and acquire the very last heritage pieces that people might still have stored in their closets.

He had plans to set up a museum and to work with designers to inspire the continuation of Batak motifs.

I pointed out there were probably just a few possibilities for the future of Batak textiles. One would be their incorporation in fashion and the other would be their recognition as an art form. In both cases, their survival would depend on wealthy external markets and the highest quality of production.

This is a sad time for me. I am beginning to understand that by giving away my book to weavers, I can thank them and return their heritage to them, but I can’t do much for the future of Batak weaving. I feel angry at the banks (and all other structures for which banks have recently become a symbol) who milk the poor to support their own wealth. The gigantic, luxurious, superficial, meaningless wealth in this world has developed at the cost of indigenous culture, among many other things. The weavings of great integrity of which Batak women are still technically capable can no longer be made. I mourn for the Batak weavers who have the creative talent to produce amazing things, but no social avenues available to express their talent. What a waste of lives, of creativity, of knowledge built up through millennia of experimentation and carefully selected influences.

The idealistic young man sitting in front of me at the table last night talked about reviving indigo and showed me pictures of the attempts by a weaver in Muara. He invited me to come to inspect his collection. He talked about his future museum. He talked about setting designers in Jakarta loose to work on clothing inspired by Batak designs. And he wanted one of my books very badly.

In the end I gave him one. It felt like a capitulation, an admission. He is not a weaver, and I had intended the books for weavers. But he may represent a future for Batak textiles. I did not say, as I say to the weavers when I hand them a book, “Thank you”.  I let him know that the book that I gave to him was an investment and that the gift came with expectations attached to it. I still feel sad and torn about this donation. I hope that his initiatives will represent a phoenix that rises from the ashes.

The day has sent me into a tailspin. We left Nai Ati in the Simalungun area after giving her a book and when we returned ten minutes later to ask a question we found a huddle of people, mostly school children, around the book. My Back to the Villages project is just an experiment. It is an expression of hope and of thanks. It may have practical consequences and it may not. A school child might become inspired. It is a seed. I am planting it here and there. Even in the garden of a wealthy business man. May it bear fruit.