Kaban Jahe. For centuries, because of the market, this town has been a centre of indigo dyeing for the Karo Batak. I wanted to see what had become of this activity and give books to the dyers that I wrote about in Legacy. The first stop was the market. The textile proprietors would be able to give me their addresses.I was warmly received, but was very sad to note that not a single indigo-dyed piece was available to purchase. Moreover, all of the blue pieces that I looked at had been woven in Tarutung for the Karo market and the quality was low. Nothing was reminiscent of the thick, sumptuous teba and julu textile types of the past. Nande Pulung, the proprietors told me, was still dyeing yarn. Jalan Irian, they said, in front of the SMA RK. It wasn’t far away, but Nande Pulung was in Medan attending to a sick child. Her neighbour, Nande Indra, who used to come over and assist with the dyeing, had become a market seller, they told me at Nande Pulung’s house, so off we went back to the market to hunt for her.I found her sitting quietly and alone in her stall. I handed her the laminated page of Legacy in which she is depicted (p. 129) and sat down with her. 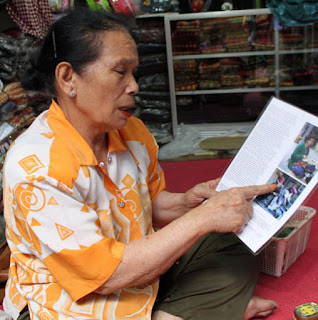 Nande Indra in her market stall at Kaban Jahe, June 2010
She tried to recall that moment 24 years ago and reminisced about the textile that she had that day on her head. It had been her mother’s and was from Aceh. 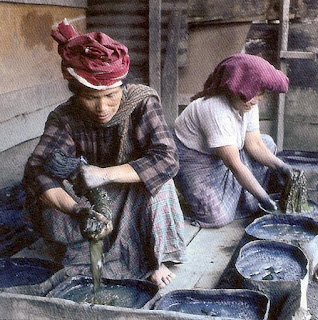 Nande Indra and Nande Pulung, Karo dyers, 1986.  Fig SR 3.8 Page 129 Legacy in cloth
What she told me amounts to the story about the last gasp of indigo dyeing in the Karo area: she had stopped working with Nande Pulung long ago; Nande Pulung had stopped dyeing with natural indigo ten to fifteen years ago; she didn’t know if Nande Peringitten was still alive; the elderly woman in Kampong Kwala near Tiga Binanga had passed away; there was nobody left in Karo who worked with natural dyes, and the people in Kampong Tanjung had ceased to cultivate tajem, their indigo plant. The tradition was dead.This is a momentous fact. The Karo, the “blue Batak” had once been renowned for their indigo dyeing and had provided for needs all the way to Si Tolu Huta (Tongging, Silalahi and Paropo). They were the only Batak to practice plangi and tritik because they wanted to decorate the imported white cotton that they dyed blue. I think that they were also the only Batak to cultivate the indigo plant. (According to my information the Toba tradition harvested a wild salaon growing on the hillsides.)Decline set in early in the twentieth century. Sitting there in the market, talking with Nande Indra, it was beginning to sink in. The Karo dyers whom I met while researching Legacy: Nande Pulung, Nande Indra and Nande Peringitten in Kaban Jahe and the elderly weaver in Kampong Kwala, were the last ones in this great tradition. And it had slipped away, not with a bang but a whimper!Nande Pulung was the only dyer left in Kaban Jahe and she now worked strictly with chemical dyes. I have a book ready to give to her as soon as she returns from Medan. For her, I selected the message from donor Tim Babcock who emphasized the importance of passing on knowledge to the younger generation: Batak weavings give immense pleasure not only to people inIndonesia but also to textile lovers all over the world. Pleasekeep dyeing beautiful high quality ulos as long as you areable, and pass your skills on to as many of the youngergeneration as you can!I will ask her if she is willing to demonstrate indigo for the Dutch weavers whom I will bring with me next year to the Batak area to learn about the Batak traditions. Clearly, only a financial incentive can revive this tradition.

See Back to the Villages - the map!
Posted by Sandra at 16:01
Labels: Batak, indigo dyeing, Karo