The Muara weavers in the opening photo

One of the opening photographs of Legacy is a two-page spread depicting a smiling group of weavers in the bay of Muara in the southwest corner of Lake Toba. One of my main goals on the 22nd of June was to find those women. The spirits of Toba guided our search. Our chauffeur, Pak Jerry, decided spontaneously (after my search had been fruitless) to ask a young man walking down the road if he recognized any of the women in the photograph. The young man was inscrutable at first, pointing out that two of the women were deceased. It took him awhile to divulge that one of them was his mother and that she was working in the ladang (on the land). Later the young man repeatedly noted how lucky our meeting had been as he was generally working in the garden himself at the time that we met him.The garden was far away and he agreed to climb into our vehicle to guide us to his mother. Her peels of laughter when we found her reminded me of that merry day, 24 years ago with my friend Erna Lohuis, when the photograph was taken.We crouched on the side of the road and I explained the book and the Back to the Villages Project and presented her with a copy. Ompu Josua received it proudly. When the school next door requested a book for their library, we insisted that Ompu Josua be present for the group photograph to acknowledge the ancient weaving heritage that her skills represent. As Mas Nashir put it, she is a cultural hero. For me, this was an important and symbolic moment as I notice repeatedly how much culture is being lost in the struggle to make ends meet and to march to the drum of external cultural influences. The struggle – there is no better word for it – to survive and get ahead in the current social and economic climate entails the excruciating irony of disregarding and coring out that which is ancient, valuable and beautiful in the people’s own culture. We do not live in a time when school children are proud to say that their mother is a weaver and weaving is not a goal to which a school child aspires. It even felt somewhat subversive to make a Batak weaver a centerpiece in a photograph of a school, but it was time! I had given the book in the name of Wendela ter Horst, a dear socially progressive friend in Oosterbeek who makes no bones about battling “the system” when she feels that injustices need to be corrected.The young man who guided us to his mother, then took us to his neighbour, another of the women depicted: Mutiara, br. Pandiangan. She was covered in mud and working in the fields. She and her husband climbed into our vehicle and we joined them in their house for a cup of coffee. She showed us some of her old textiles and the harungguan that she was making. 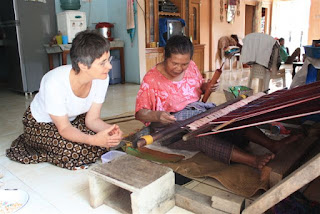 Pamela's weaver, Mutiara br. Paniangan, Ny. Siregar, making a harungguan
Near the end of our visit, the weaver’s husband asked if I couldn’t assist in some way to revive the Batak weaving arts. I told him that this was one of my long-term goals and that I would do my best to contact them again in the future. The weaver is a very talented and bright woman. She knows how to make indigo dye from the local salaon plant and longs for the opportunity to weave textiles of integrity rather than just to earn a pitiful few cents on the market. I was pleased to have made this presentation of Legacy courtesy of Pamela Cross. Pamela has been so terribly supportive of both Legacy and this project that she deserved a recipient in that wonderful opening photograph in the book. Furthermore, Muara has ancient ties with the Silindung Valley with which Pamela also has strong ties. And finally, the hint of a future for Batak weaving, through this talented weaver promises to give her gift longevity. I hope that she may one day meet the recipient of her generous gift.Another of the women in the photograph lived close by, but was unavailable just then, so we gave her the book through her daughter-in-law, courtesy the Soroptimists of Arhem. 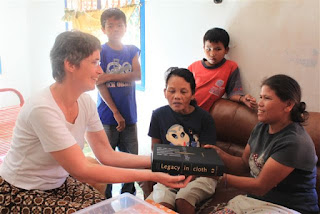 Before leaving Muara, I wanted to give one more book to a group of active weavers. I found them by calling Torang Sitorus (see blog: Didn’t Pay? It was costing money!) who had expressed the hope that indigo-dyeing could be revived in that part of Toba. It also turned out to be a village that I had contacted in the past: Huta Simatalo II. Two women were weaving the very long surisuri textile and the whole village came out for the presentation – courtesy Museum Volkenkunde in Leiden. 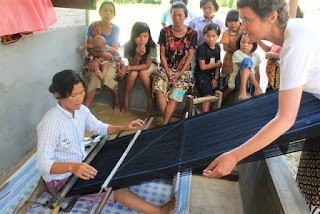 I could not have hoped or imagined that more interest could have been expressed in the book.  Such a moment, sitting on a mat with the entire village, talking about the results of my 30 years of work…I must not dwell on this as it is too overwhelming. 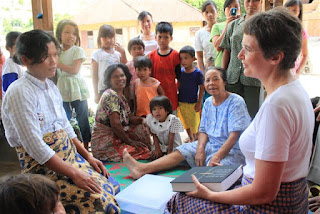