On Samosir, the spirits are etched in the landscape. It is one of the most spectacular places in the world, a place of magic, myth, poetry and power. Waringin trees. Monoliths (the Batak have stories about them flying through the air to their destinations). Stone walls that defy physics. A spring with seven different flavours. Waterfalls. Scarred hills that tell of ancient cultivation. A lake so deep that it can only be described as bottomless, the highest and largest in all of Asia. 75,000 years ago, one of the biggest explosions in the history of the world occurred here. Lake Toba is the crater. The violence of the eruption has softened with time. Great, bald hills encircle the lake like gentle protective arms. The highest peak is Navel Mountain, the umbilical of Batak origins. The apical ancestress was a weaver who lowered herself from the realm of the gods on her handspun yarn. Weaving has traditionally occurred all around the shores of the lake. 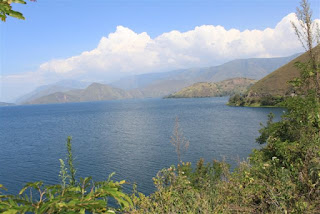 I write, now, from the gash in Navel Mountain where hot water gushes and the air smells like sulphur. I feel that the spirits, today, have guided my journey. The meetings have all been precious. They have collapsed all time, from the first weaver, Si Boru Deak Parujar, to my first visit 30 years ago, to the realization of this Back to the Villages project.Today I gave away five books. Each is a complete story in itself. Each was photographed extensively by MJA Nashir who, I could tell, feels in every fibre of his being exactly what this project is about. How wonderful to have him along and to have no concerns about this amazing journey being recorded.The five books:1. Simanindo Museum at the northern tip of Samosir Island. I gave this book in the name of the Volkenkunde Museum in Leiden to the daughter-in-law of the now long-deceased Sidauruk couple who so kindly helped me with my research. They allowed me to stay in their home and introduced me to Amang Adir, the village guru knowledgeable in esoteric Batak matters. I commissioned the spinning wheel (sorha), yarn pitter (pipisan) and bow (bosur) in my collection from him. The daughter-in-law, now widowed, looks after the vision created by her father-in-law whom she never met. She was pleased to receive the book and wanted to share it with the other family members (in Jakarta and Medan). 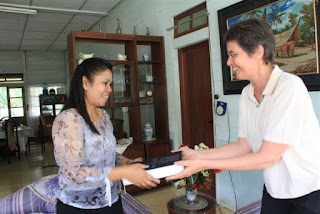 2. As we were leaving the village, we spoke to Lemar Sidauruk, a villager. He wanted to know what our business had been. When I described it, he said he badly needed a book because it would assist the village when it puts on dances and ritual re-enactments for tourists. Sensing that his interest was sincere, and realizing that if I gave him a book many more people would have the opportunity to see it (that, after all, being the goal of Back to the Villages project), I gave him one in the name of Andrew and Lily Wang whose message specifically thanks the recipient for perpetuating tradition. As we left, he had already been joined by a few men and they were thumbing their way through the tome. 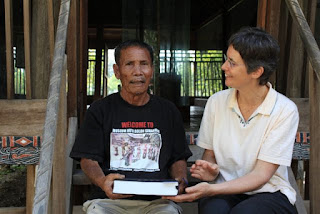 3. Further along the road, approaching Pangururan, we stopped at the same village where I had been a few weeks earlier and had promised to return. One of the weavers was present. Her mother and neighbour were also weavers. 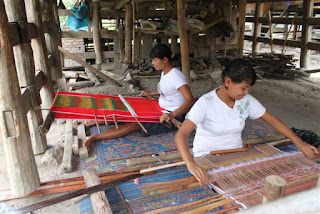 We sat together on a mat in the mother’s house while she demonstrated how she winds yarn using a spinning wheel. 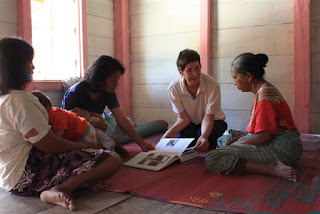 I gave them the second donation from Andrew and Lily Wang. They were very enthusiastic about the book but decried current market circumstances. Weaving has become an almost worthless activity, they said. How could they keep the tradition alive?

4. After lunch at Navel Mountain, we continued over a very rough road to Harian Boho. My weaving teacher, Ompu Sihol, had lived there. She died many years ago but I hoped to find her descendants. It was as though her son was waiting for us. He was sitting in a make-shift coffee hut. He had gone blind. Fifteen years ago, he said.  My heart sank as this book was being given in the name of the book’s designer, Marie-Cécile Pulles. It was such a bitter moment because Cécile’s task had been to care for the appearance of the book. This bitter moment had a silver lining, however, because the blindness of the son meant that the grandson had to be sent for.

He was 6 years old when I had taken my weaving lessons from Ompu Si Sihol and he still remembered me. Cécile had seen the children lurking in the background of my photos with Ompu Si Sihol and she had specifically asked for the book to be given to them, the future of the Batak tradition. From a bitter moment, it became a very emotional moment combining my memories of Ompu Sihol with the bond forged with Cécile as we made the book together. The recipient, Juni (from Juninto) Malau immediately recognized his grandmother in the photographs in the book and also her dye pots. He was a nice young man and his little daughter was with him. I asked him if she would learn to weave. He led me and his blind father to Ompu Sihol’s village which I had visited every day, walking along a babbling stream and through the rice fields. 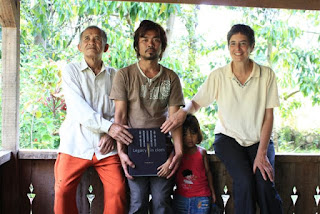 I visited the spot where she had cached her indigo pots.  It was close to where her grave is now. Much had changed and much had remained the same. I recalled my last meal in her son’s house. They had served me chicken wings to help me weave “in my country” (this was said with much flapping of arms and merriment). This time, I departed with a strong sense of a history that the future would bring.

5. I left one book behind in SiHotang (valley and bay south of Harian Boho) with a family member of Ompu Borsak depicted on page 73 of Legacy. He was a farmer threshing his rice while we drove by. We stopped the car to ask him if he recognized the women in the picture and he responded without hesitation. They were family members. He said that the older one was still alive, but lived some 20 km. further down the tortuous road that we had managed only with the great skill, patience and willingness of our driver. The clouds were closing in over our heads and we knew the road would be impassable if the rains were heavy and it might be difficult to get back. I decided on the spot to request his help in giving the book to Ompu Borsak and her daughter.  We sat down in his lean-to shed amidst the threshed grains of rice and I explained the project. He listened attentively, periodically asking a question. When I was done, he said that he didn’t feel that he should receive the book, but that I should give it to Ompu Borsak’s son in Pangururan. Now, I liked this farmer a lot. His eyes were as bright as his occasional brilliant smile. He was clearly dependable, honest and sincere and was certainly in some awe of the gift. I told him that I would take a copy to Ompu Borsak’s son, but that I also wanted to, through him, give one to the valley of Si Hotang if he would be so good as to show the book to as many people as possible. He was pleased to assume this responsibility and the transfer was able to proceed.  I gave the book in the name of Jan Hofstede, a person who lives close to the earth, is a farmer at heart, and would have felt great affinity with this rice farmer. 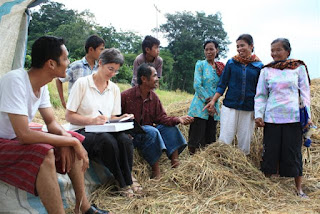 As we left this remarkable valley, we caught a glimpse of the great stone walls depicted on page 106 of Legacy. I could not resist, despite the risks involved in further delay, clambering over the boulders marking the boundaries of the rice fields, and down to the gap in the fortress wall. I stepped once again, just as I had 30 years before, inside the great village of Simarmata. The magic was almost palpable. 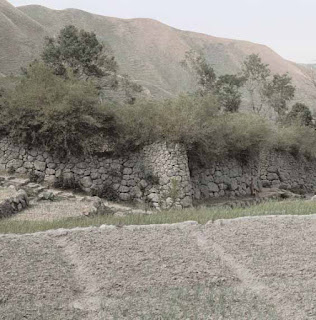