The Last Day of the Project

I made it back to the Karo dyers on the eleventh hour: the last day of the Back to the Villages project (June 26). Back to where the project had begun. 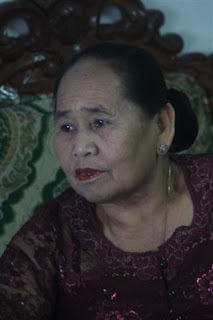 Nande Pulung was at home preparing to go to a pesta (ritual) so she and her husband were dressed in their finery. The large sitting room was empty except for a few chairs and several large sacks. During the course of our visit, someone came to bring Nande Pulung some ikat-tied yarn to dye and she stuffed it in one of the sacks. The other sacks, as it turned out, were filled with dyed yarn.

She explained that it was no longer possible to work with natural dyestuffs (i.e. indigo). The village that had provided the tajem (indigo plant) had decided to use the land to cultivate truck crops. (I often say that in the Karo area the onions are the reason for the decline in textiles.) Even when I asked if I could order indigo–dyed yarn and pay for it well, even if I supplied the indigo, she claimed that she would not be able to fill the order because “the materials were not available.” It was unclear which materials these might be.

She remembered me, my thank-you letter to her from 24 years ago and everything we did during my visit. She seemed happy and thankful for this follow-up visit and looked long and hard at the photograph of the giver, Tim Babcock (who encouraged her to pass on her skills; see blog Last Gasp).  Her husband read Tim’s message aloud in Indonesian and then explained it to her in Karo Batak. 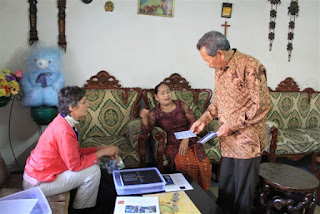 She and her husband also closely examined the photograph that I had brought with me of a rare Karo textile in the Tom Murray collection, but she did not recognize it. She identified the ikat as bayubayu dua lapis and the stripes as kayuna, but could not assign a specific name to the cloth. She told me to visit the owner of the ATBM workshop (with semi-mechanical looms) close by as he wanted to revive old patterns. In addition to the weaving that he does, he dyes ikat patterns in yarn.

We went off to visit him immediately but he was not at home. We gave a copy of the book to one of his employees and his sister. Of course, I had mixed feelings about this presentation because my intent has always been to give the book to weavers (they referred to the backstrap loom technique using the word gedogan), but I gave the gift deliberately and with resolve, hoping that Helmy de Korver, the donor of the book, would support my choice. I assumed that the owner of this little factory was a textile enthusiast because of his reputation for trying to revive old patterns. The chances are good that he will value the catalogue portion of the book. He could well be someone who, if he has enough capital, will conduct textile experiments that can usher the craft into the future. (Oil companies, for instance, are at the forefront of research in solar energy. May that represent a parallel!) This is a time of planting experimental seeds. I hope to visit him again in the future to see if this seed has fallen on fertile ground. [I am now at home in The Netherlands before this blog has been posted. I came home to a gratifying thank you note from Mr. Tambun on my email!] 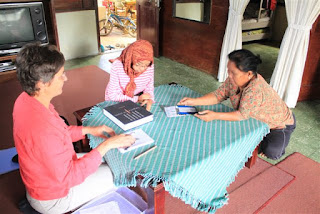 The presentation to the ATBM workshop owned by Ir. S. Tambun in Kaban Jahe. His sister is looking at the photos that I brought of Tom Murray's  unusual textile. Nobody had ever seen that textile before -- but they knew that they could replicate it!
From there we went to Nande Peringitten’s house. It had not changed at all and although Nande Peringitten died 15 years ago, two of the young people in the photograph with her were still living there (her grandson and daughter-in-law). Her daughter-in-law (Mamak Eka) had taken over the business -- except for the indigo dye component. Her explanation corroborated Nande Pulung’s and Nande Indra’s story: this dye technique was just not viable anymore. Moreover, Mamak Eka had to supplement her income by raising pigs, just as Nande Peringitten had done. I presented a book to her in the name of my friend, Heather Wilson, and asked her to show it to as many people as possible. Nande Peringitten’s descendants shared the general regret that indigo was no longer used, explaining that the natural dye yielded much more beautiful results than the synthetic dye. 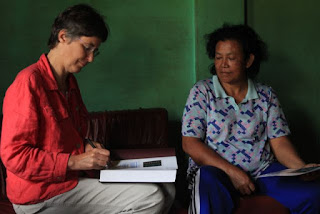 Giving the book to Mama Eka, Nande Peringitten's daughter-in-law
From there, we returned to the market to meet up with Nande Indra to whom I had promised a book a few weeks earlier (see blog Last Gasp). Unfortunately, she had gone to the same pesta (ritual event) as Nande Pulung. Her granddaughter in her market stall explained that she had never received my telephone message that I would not be able to visit that evening a few weeks before and she had waited up for me until deep in the night. She was terribly disappointed when I didn’t show up. I was pleased to be able to alleviate that disappointment by handing over a copy of the book in the name of Pamela Cross – a textile lover who is very faithful and punctual and almost never disappoints anyone by failing to live up to her promises.

See Back to the Villages - the map!
Posted by Sandra at 15:49
Labels: Kaban Jahe, Karo dyers