Today I gave away a book in a slum in the Karo city of Kaban Jahe on a narrow street called Gang Persatuan. It was the first of the series that I hope to present to textile makers. As I walked back to the car afterwards, I felt light and happy. I hadn’t realized how heavily the books had been weighing on me.

It was a memorable moment. In a lean-to constructed from scrap pieces of wood and an old plastic tarp, several women were working together on tattered mats made of woven plastic strips. One was twining an edging and the others were twisting fringes. They gave me permission to sit with them so I slipped a sarong on over my pants, took off my shoes and situated myself next to the twiner. 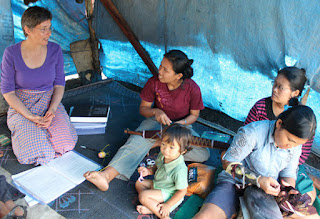 At first it felt a little like leading a seminar. I asked them to listen to me because I had an important message to share and then I explained that I was a student of their craft, that the results of my research were finished and that they, as practitioners, had a right to the final product. Passers-by started to gather at the doorway of the lean-to and those who had been there from the beginning quietly brought them up to date. It started to feel like a ritual and a happening.

I presented the book in the name of Sanggar Kreasi Batak because my primary contact with this New York group of immigrant Bataks is Wita Sitepu, a Karo woman. I told them a little about the group and explained the significance of the gift, not forgetting to let them know the price of the book and the need to care for it, but also to use it and enjoy it.

They were intrigued by the pages showing the different textile types and also the descriptions of the twining, immediately spotting the motifs that they were making. I told them that their techniques were very ancient and valuable and should be treasured. I read aloud the message that I had stamped on the first page, explaining the project and also the message from the donor, Sanggar Kreasi Batak. 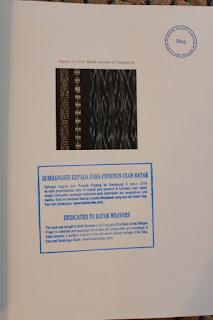 They explained that their group was a voluntary, horizontal one and did not have a leader, but one woman agreed to store the book in her home. She thanked me and presented me with a Karo textile. All of the women would have liked to have had the honour of storing the book. I wonder how they will share it in the coming days?

My only regret was that I couldn’t stay around longer as the fly on the wall to hear what they had to say when I was gone and how they will react to the book over time.  They were respectful, curious and interested but it was also clear that they didn’t quite know what to make of what had just happened to them. Time will tell.
They seemed pleased at the idea of teaching their techniques to the group of textile practitioners that I will be bringing to the Batak area next year. It will be a super opportunity to follow up and perhaps get more insight into the reception of the volume.