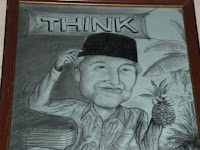 In 1922 a remarkable man was born in Pekalongan. He was a joyful man who loved a challenge. When he became old, he joked to his son that he would like to swap ages because he was still so very full of the possibilities of life. The 89 years that he was allotted were too short for him. In his home where his daughter continues to lives, there is a cartoon of him hanging on the wall. Beside his head, in big letters, a single word that characterizes his life is written: “THINK”.
Kadir was a conservationist and recycler before his time and he was unstymied. If materials were not available, he found substitutes. If quantities of available materials were becoming a nuisance or going to waste, he found ways to make them useful. Similarly if peoples’ talents were going to waste, he found a way to deploy them. If he was stuck with a technical problem, he turned himself loose on his library, and let the people in his surroundings apply themselves to the problem to see if their collective thought could yield a solution.
He was an inventor, engineer, intellectual and socially engaged. And he had a weaving factory. He had no use for patents. For him, the joy in life was in meeting problems creatively and sharing solutions, allowing the intellect to bubble and spread and not to be defensive. He learned how to make and weave pineapple, banana, abaca fiber and water hyacinths.

None of these materials are new today, but he was the first in his region to make use of them.  He transformed waste newspapers into weft and he batikked towels. He also invented a remarkable technique that he called “banun” that collapses batik (the “ba” part of the word) and tenun (the Indonesian name given to woven unbatikked cloth, the “nun” part of the word).
The technique works like this. First a length of cloth is woven. A pattern is then wax-drawn, as though to make a batik, onto the finished cloth. The cloth is then dyed, dried and unwoven. Then the batik-dyed warp is re-woven with a new weft. This is why Kadir’s son and daughter explained to me that the cloth was “woven twice”. Why would one go to so much effort when it would be just as easy to ikat pattern the warp yarns? Moreover, there would be no waste in the form of discarded weft. “Because people here are willing to weave, but they are not willing to tie ikat patterns” was the response. The technique coincides with a social circumstance.
Because I was not able to conceive of “unweaving” a cloth and how the unwoven warp is put on the loom, I was taken into the back room where the looms were in use. Only part of the cloth is initially unwoven. The rest is rolled up the way a warp would be rolled on the warp beam. The ends of the warp are installed in the weaving mechanism and then weaving proceeds as normal. Weft is removed as more warp is needed. The process is not particularly cunning. It is simply yanked out of the cloth.
In the course of our conversation, I learned that Kadir was also the source of the “fake” ship cloths that were made at the end of the last century. It was an inventive process in which he even revived hand-spinning in Pekalonan. “The cloths were ’saleable’ for a little while and then the market for them disappeared and he stopped making them” I was told. I remember when people were just learning that “fake shipcloths” were on the market and they had to be warned that they were not purchasing “the real thing”. My visit to Kadir’s home taught me great respect for the inventiveness needed to make such “fakes”. Indeed, the history of cloth could well be framed in terms of inventiveness inspired by novelty.
Posted by Sandra at 01:30
Labels: banun, Kadir, Pekalongan