It is easy to imagine the Pekalongan of yesteryear when the Dutch were still here. There are still so many of their buildings: the home and office of the Resident, the “societeit” (soos) where they used to gather to satisfy their social needs, the church and so on. The city centre, now a huge traffic circle built around a park, is still intact; it must have made a glorious and majestic impression.
The newly-furbished excellent is in an old VOC building. The floors are original, so are the ceilings. Even the bars over the windows of the room where the money was imprisoned are still there. 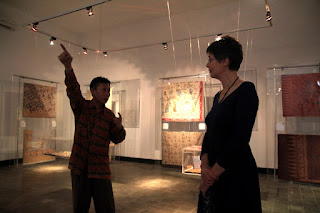 The curator, Zahir, came up to me with his black eyes flashing mystically and said, “The money is still here. Perhaps the Dutch hid it under the floor.” I disabused him of his fantasy. “The walls of the Tropenmuseum in are decorated with gold purchased with colonial money,” I said. Zahir was only partly joking, however. He is intensely aware of the “value added” of the beautiful museum building. Precisely its authenticity, that it has been maintained but not overhauled, means that the building has a particular aura, like a whiff of something that half awakens a memory that cannot be defined. “This building is gold,” said the perceptive and articulate Zahir. “In any other building, this museum would be so much less.”
Alas, the home and workshop of Eliza van Zuylen have been demolished. 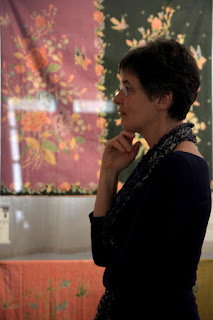 Zahir was captivating. His passion for batik was almost palpable. While I stood gazing at a beautiful copy of a Van Zuylen batik with pastel colours, he came up to me and his black eyes started to flash again in that mysterious way. “All of the original Van Zuylen batiks have been bought up by collectors outside the country. The batiks are now unaffordable. We have none left here in Pekalongan. Maybe there are a few in private homes, but the museum has none.” In a nutshell, Zahir had expressed one of the great ironies of this grand Kota Batik (City of ).

The next day, my host Arif Dirhamzah, took me to the computer office of a friend, named Zakaria. He teaches batik producers to access international markets using the internet. We sat at the screen of one of his computers and mas Arif showed me the photographs of Pekalongan batiks that he had found on the KITLV website. There were several from the Vlisco collection in The Netherlands, so we shifted to their website, and then I showed them the on-line collection of the Tropenmuseum in . At one point Arif stopped when he found the name of a local producer in the documentation of a cloth. “Who is that person again?” he asked his friend. Zakaria reacted with amazement and peered at the cloth. “That was my grandfather,” he said and started to recite the names of several generations of his family. As we were about to leave, Zakaria said, “With this visit, I feel like I have struck gold. I cannot tell you how much this discovery means to me.” “Keep going with your discovery of museum collections,” I said. “There are more people in Pekalongan who will get that same feeling when they see the cloths of their ancestors. Perhaps you have struck gold in more than one way. Think of what your computer can mean to all descendants!” 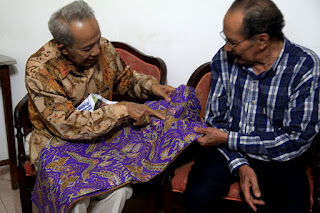 Arif organized a dinner party around my visit. It took place in the gracious home of Bapak and Ibu Fatchiyah, a large Pekalongan batik producers. Mas Arif invited a remarkable collection of people who could offer memories or insights into the Van Zuylen batiks. Some brought textiles from their homes to show and I saw how deftly the people unfurled them and held them up, how they spoke the same language when discussing the cloths, how admiring their were of good designs. Again and again there were expressions of regret that the Van Zuylen pieces had been almost entirely bought up by people living outside the city and the country. There was little tangible evidence on which to rest their conflicting claims about Van Zuylen colour, dyes and designs. “Outside , the collections are complete,” they said over and over again. 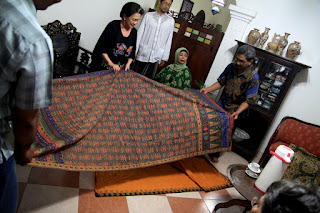 At the end of the evening it was my turn to say a few words. “We stand at the beginning of a new era,” I said. “The past was the era of collecting. Now is the era of sharing. The Tropenmuseum and other museums may have many textiles but these textiles do not live the way that I have seen them living here tonight. They are stored carefully, however, so that they will last. They are a priceless resource that can be consulted. They are a public resource. In this age of internet access is no longer as challenging as it used to be. I hope that you will think of them as your own collections. You can “revive” those museum collections lying “dead” in their storage chambers and make them live again, just like the cloths in this room. These collections are pots of gold waiting to be mined by you.
Posted by Sandra at 01:18
Labels: batik, Eliza van Zuylen-Niessen, Pekalongan, Pekalongan museum