Yesterday we participated in the 2013 edition of Festival Danau Toba. Nothing went according to plan and if there ever was a final plan, it emerged at the last minute and was then very, very promptly not followed. 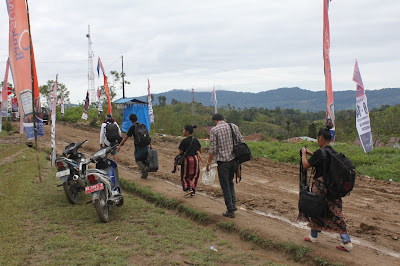 We were to be collected at 8 am and to mount the stage at 9 a.m as the first workshop of the day. We arrived at the muddy foot of the mountain at 9 a.m. Vehicles could neither enter nor exit without a great deal of slippery commotion and shouting. We climbed to the open stage under the threatening skies, carrying all of our heavy books, posters, bags, computers, textiles and found no stage managers present and no place to hang the textiles. No television. No sound equipment. 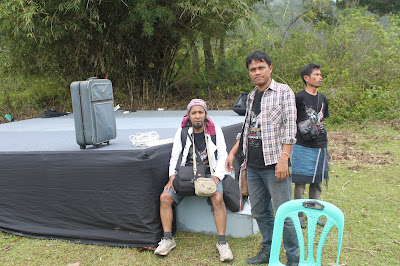 Then the drum group from West Sumatra started to practise and no sounds could compete. The grass was wet, the stage was wet, there was no place to sit and no place for our bags. With difficulty I found a discarded sack.

All of this called for one thing: an anthropological stance. It was time to distance myself from expectations and just let the festival be what it is, a festival on Samosir Island. Then the magic started. 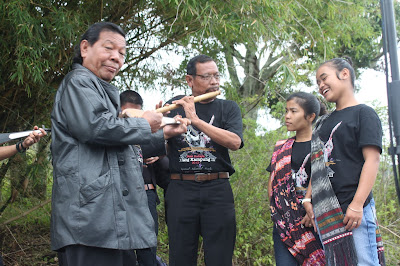 Marsius and Sarikawan Sitohang arrived and climbed onto our stage along with a local acoustic group and whatever disappointments there might have been dissolved into admiration for the performers. This surely has to be the essence of Festival Danau Toba: local talent emerging and performing! 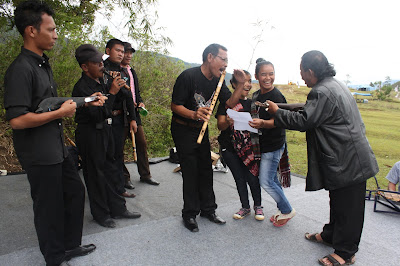 We suggested that the film’s theme song, the Weaving Song, could be one of the performed melodies but the problem was that there was no female vocalist. Inspired by the sphere of improvisation (and perhaps unencumbered by the fact that there was as yet no audience) I suggested that Febrina and Lasma be the vocalists. Why not? I hear their sweet voices every night. And the Sitohang brothers are brilliant teachers. The page with the words appeared from somewhere, Lasma and Febrina took the little bit of coaching to heart and then dared to perform on stage. They amazed everybody, including, and perhaps especially, themselves!  Afterwards they were filled with energy. People asked for their signatures and they gave interviews to leading Indonesian media. 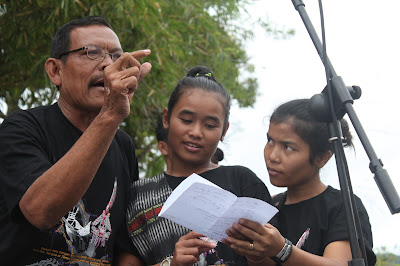 Is this not the purpose of a festival? This kind of special meeting is only possible when the script is not too tight. Innovation. Spontaneity. Improvisation. In Indonesia “the moment” is so important and it cannot be rehearsed. It just happens and when it happens, it is pure magic.


We had lunch at Pondok Ganda, a beautiful house in Tomok. There I met one of the coordinators of the whole festival, Ibu Sari Madjid. She explained that her goal was to inspire local talent, not fly in “stars” from outside. I was so thrilled to hear her ideas. I had just had first-hand experience of how Festival Danau Toba could be a spark to encourage the revival of local talent and artistic skills.