Back to Guru Sinangga's Village

Suddenly there was no electricity in Hutabarat yesterday. We were there, in the Silindung Valley, to show our film in my older sister’s home (ibu Bonaria Hutabarat). I asked if we couldn’t perhaps go to Sait ni Huta in the meantime and at least see the church and place of origin of Guru Sinangga Matondang. A few moments later, we stood in Sait ni Huta where the huge, golden statue of Nommensen is erected. A large church there has the dates 1864 1933 painted above the door.


Apparently that church was built in 1933, long after Nommensen had moved to Sigumpar. (He died in 1918.) The candidate minister who greeted us there in the village centre ushered us into the church, said that the original church built by Nommensen was no longer standing. A small monument had been erected to mark its place in the neighbouring cluster of homes. 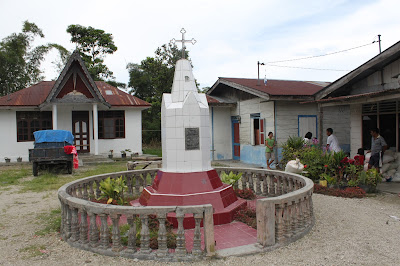 The second church built, in 1864, was across the street from this big new church.

It was now used as a Sunday School. Because the big church was so light, I asked if we could see the interior of the church built in 1864 and we were given this opportunity. Entering this building, the sense of history was much greater. The structure was older and darker. It was clear that this was the better building for a film showing. Ibu Hutabarat and I mused about what kind of seating there must have been in Nommensen’s day.

While Mas Nashir and some of the team were setting up, our big red bus went back to Hutabarat to pick up people who might like to come to see the film and Ibu Hutabarat, Lasma and Febrina and I went off to see the monument to the first church. As luck would have it a cluster of small children was twisting textile fringes and I filmed them as Lasma and Febrina talked with them. 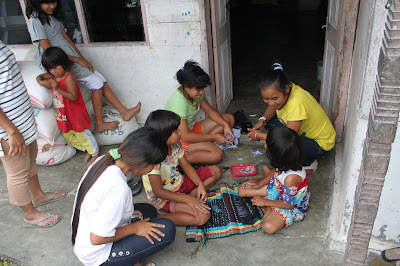 We brought a group of these children back with us for show time. Most of our audience was children.

And then there was the magical moment. There we were in Sait ni Huta, telling the inhabitants about the great Guru Sinangga Matondang, letting them know that through Nommensen’s intervention an oral text had been written down and was now stored in Europe and that we were ‘bringing it home’. While every screening has been an act of ‘pulang kampung’, this one in particular, was the real Pulang Kampung: back to the place of origins. Our first stop on our long trip was to Sianjur Mula2, the place of origin of the Bataks and now one of last stops is the place of origin of the text.

The woman sitting beside me during the screening mumbled some of her reactions. I could see that the language of the text was familiar to her. Not all of the weaving techniques were familiar, however, and I was reminded that our film really is a hodge-podge of reconstruction with a text from one place and weaving techniques from several other places in Toba. I explained to the audience the challenges that we had faced during the filming and how we had had to pluck skills from here and from there and that we had been lucky to find all that we had found.

I felt humbled by this Pulang Kampung act. It was so special to do it with the assistance of my ‘older sister’, Ibu Bonaria Hutabarat, deakonesse. It moved me to give her a copy of our film when we were done. She has known me since I was a scared 24-year-old coming to Tano Batak for the first time. And now she is elderly and I have established my own ‘style’ as an anthropologist. We faced each other yesterday as two women who have shared 35 years of our lives, grown and changed together.

We also gave a copy to the candidate Minister who told us that he wanted to erect a museum to Nommensen. It is likely that our film will enter the museum. Did Guru Sinangga become a Christian? Did he commit his knowledge to paper as ‘a heathen’? What was the nature of his relationship to Nommensen? Did he ever enter the church where we showed the filmed version of his text? The candidate minister was moved by our film and our devotion to Batak culture and said that he would like to see it many more times. There have been indications during Pulang Kampung III that many Batak believe that the church has been too strict and narrow in its acceptance of Batak culture. Will the presence of our film in the Nommensen museum in Sait ni Huta signify a re-unification of culture and religion? The fact is that the Rangsa ni Tonun text was among Nommensen’s papers. What did that mean in Nommensen’s day? Just language study? Admiration of the guru? We don’t know the answers to those questions, but the reception of the film in Sait ni Huta yesterday was a hopeful sign for the future.
Posted by Sandra at 02:05
Labels: Febrina Pakpahan, Guru Sinangga ni Adji, I.L. Nommensen, Lasma Sitanggang, MJA Nashir, Ojak Tampe Silaban, Pulang Kampung III, Sait ni Huta