Let go of the modern concept of ‘the marketplace’ for a moment and think of the power of the market in the pre-colonial Batak world. It was a world of internecine warface. Village warred with village, marga (lineage) with marga, region with region. Batak ‘wars’ were always cunning (conducted with the help of  magic, spells and potions),  occasionally involving face-to-face fighting (but more often guerilla-style attacks and counter attacks), and often of long duration. But life had to go on, food and ironware had to be obtained, produce had to be sold including to external markets, and so the ‘peace of the marketplace’ was set up. All of the great markets around the lake worked on a set schedule. On those market days pacts ensured safety from village to market and especially in the market. Warring was set aside temporarily for the sake of trade. Markets were large and busy and because of the transportation opportunity offered by the lake, they could be attended by huge crowds, all of whom made their way there in the solu bolon (large dug-out canoes) bearing their trade goods.

One can imagine, then, that the marketplace was a place of singular importance. The marketplace was the place to meet and exchange the news. Women introduced their newborn babies on the market, a kind of ‘social’ baptism. This was also the original crucible in which textile design was introduced, exchanged and innovations achieved consensus. Logically, disputes were settled on the market. The large waringin trees mark the spot where adat leaders would meet to hear cases and try their hand at settling the problem. There were also large ritual gatherings, called bius, but these were infrequent and involved the population of a region, and were choreographed for the occasion. Markets consisted of motley crews, people from near and far and the unexpected was expected to happen.

When I thought of the places where I would like to re-introduce Rangsa ni Tonun into the Batak community, the Batak market sprang to mind. The Batak village was my first choice, in the village square. During the journey, the weather did not work in our favour, alas. There was so much rain. In the end, we had no screenings in village squares at all, but always in Batak homes crowded full with everybody who could fit in. The ancient Batak markets took place on grassy plains under the open skies, but the current markets are covered over and dark. That would work to our advantage.

When we left the Festival Danau Toba on 12 September, our goal was the Nainggolan Market, but it was a barren, desolate (and smelly) place and turned out to not be the wrong spot for that day, so we chugged on in our Boat Budaya to Muara.

Muara! Immediately we were recognized! There was Febry, home from Bali, flaunting his news about his successful engagement to a Dutch girl for all to hear. Close to the entrance to the market we ran into Ompu Rido selling steamed rice cakes. She was wearing our Pulang Kampung III t-shirt and became so excited when she saw us she scarcely knew what she was doing and began to jitter! We left her with a huge bag of rice cakes in our hands. Then we saw Restuala’s Mom and Ompu Joshua’s daughter; it was like a homecoming with the true spirit and warmth of the marketplace.

Nashir stubbornly pressed on. The marketplace may have been my harebrained idea, but his stubbornness made it happen. We found a market stall willing to accommodate us. We chose a textile stall and explained our need for a place to set up a projector and Pak Jerry’s bulky sound system. That might sound easy, but we had to bring the generator from the boat, purchase fuel for it,

and make sure our extension cords could reach it. Just like other people with bales of wares, we pushed our equipment on two-wheeled trollies through the muddy aisles.

Some textile proprietors grumbled that we were ruining their opportunity to make sales and we argued in turn that this would only take a moment and that we were attracting the public and stimulating them to love Batak textiles. We handed out copies of Bhinneka, the tabloid about our activities, and nestled in amongst the bales of red, gleaming textiles made on ATBM looms to watch the film.

The aisles filled up with people of every age. 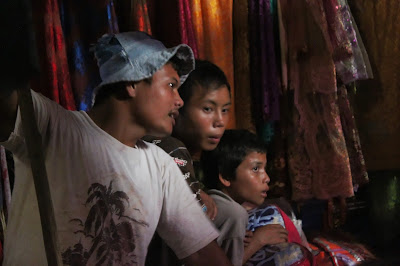 Nashir stood beside the rigged up, white cotton screen and tried out the microphone. It worked. Paul Manahara Tambunan manned the projector atop a bale of textiles.


Ojak Silaban and said a few words to introduce the film and then Nashir clicked the right keys on his computer and started the show.

By that time, Ompu Rido had joined us and when Boru Hasagian appeared on the screen

, she was beside herself once again, and didn’t know whether to try to hide amongst the textiles in her shyness or stand up and take a bow. She shrieked a few times and flopped back on her back. It was her crowning moment in her own village and when I said a few words at the end to thank the textile proprietor, I also thanked Ompu Rido for her participation in the film. I was sorry that not all of Huta Godang was there as so many of our film stars are from there.

In an attempt to get a bit of a discussion going, a few words were spoken by a clever woman who immediately realized the power of the film. She expressed the wish that Batak textiles would thrive. Lasma made a few resounding comments to thank the visitors for watching and to remind them that the survival of Batak weaving depends on them.

Then there was the requisite photo session. “Please Miss, a photo?” The stall proprietor’s son draped their best textiles over our shoulders and photograph after photograph was snapped.

Thus we introduced ‘our baby’, Rangsa ni Tonun, on the market of the place that feels the most like home for us in Tano Batak. It was an experiment and one that we liked alot. The screening wasn't perfect, however. There just wasn't enough room to accommodate all the people who wanted to see it and although we had a strong sound system, the sound got lost in amongst all the textiles. We weighed the pros and cons of every screening and no screening was ever perfect, but this one had magic. We will always think of it with a smile.