Today Ojak Silaban posted pictures of Sihol and her children on Facebook. I look at the beautiful children. Sihol’s grandmother would have been proud of them. I remember weaving with her one afternoon when the sound of church bells came wafting over the rice field. Ompu ni Sihol sat up and took notice. Someone had died. It was a child. We walked over and visited the mourners and I saw the deep sadness in Ompu ni Sihol’s face. I do not know how many of her own children she had buried, but only one son had survived. How thrilled she would have been to have had these healthy, smart, great grandchildren!

The ‘Back to the Villages’ expedition with Rangsa ni Tonun had to include Ompu ni Sihol’s village in Harian Boho to pay homage to the woman who had provided ‘The Weaving Song, the theme song of the film. I had taped her in 1980 while she sang and reeled yarn to demonstrate the use of the iraniran, or Batak reel. Thirty years later, Suarasama made a musical arrangement for it and performed it for our film.

On 16 September, 2013, our boat sailed toward Harian Boho and we docked at  the empty marketplace. 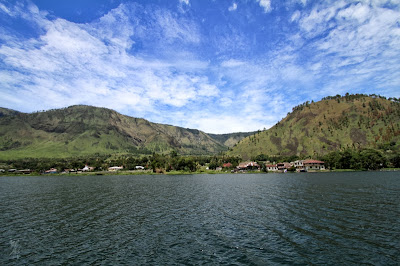 Se
It wasn’t market day and the morning market was over, too. The last time Nashir and I had been there was 2010. We knew our way to the coffee-tent, but it was a very hot day and there was almost nobody there. That had been one venue that we had considered for showing the film. There was no need to say anything to each other. We knew it wouldn’t work.

We started to climb the path to Ompu ni Sihol’s village. It was a path that I used to love to walk in the cool, verdant forest. It took me through rice fields first and then along a stream. I had had to wind my way around megaliths and huge tree roots. How I wish I could have given my team that experience, but the modern path is flat and paved and straight. And so hot under the tropical sun! So many of the Batak villages have used heavy equipment to shift the rocks and have poured concrete mortar between them to make flattened stretches that are easily negotiated on foot and by motor vehicle. Modern, maybe, but no longer delicious.

We finally found Ompu ni Sihol’s village, deserted and empty. Her son’s house is still standing and he was there with his very young granddaughter.

He was blind. This wasn’t a good place to show the film, either. I was suffering from the flu and I wasn't much use because I could only think of lying down. We sat together on the front veranda of the house and Nashir saved the day.

He began to play the soundtrack of Rangsa ni Tonun that starts out with Ompu ni Sihol’s quavering old voice. Her son recognized it immediately, noticeably. We all watched his face. Then Nashir found his digital copy of my tape recording of her from 1980 in his computer and he played it for the old man.

The blind man sat back with a smile. He remembered his mother and the day. He enjoyed it. Playing that soundtrack was the best way to present Rangsa ni Tonun in Ompu ni Sihol’s village.

And then we took our leave. I made sure that I snapped photographs of her house this time.

Who would believe me that she had lived in such a little, impoverished hut? The lean-to beside her hut is no longer there, but the stones on which she balanced her earthenware pots and dyed her yarn are. I tried to picture the village as it had once been. I found it hard to do.

Bits and pieces of memory came back. We wandered over to her grave. I remembered the rice fields with the church on the other side. I had forgotten how lush the trees beside the village were. 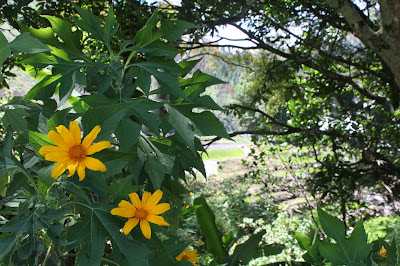 I rejoiced in being able to catch a glimpse of how the Batak villages in Harian Boho must once have been. I could see that now although I cannot remember having seen that thirty years ago. There was still bamboo growing atop the rocks surrounding the village. The stages of decay have been slow and have left traces.

Then we left the desolate village and made our way back under the merciless tropical sun to the boat.