Another Experiment in Muara

The afternoon showing of the film in the Muara market was successful, but we still felt obliged to give more of the people who appear in the film access to the film (especially the indigo dyers in Huta na Godang). I remembered the beautiful evening arranged for us by Restuala Namora two years earlier when Threads of Life came to visit Muara. Behind Hotel Marsaulina there is a small conference room surrounded by four glass walls overlooking Lake Toba. It really is spectacular. Restuala had brought musicians and the tables and chairs could be rearranged to suit the discussions that took place. There is no better backdrop in all the world.

There were other advantages as well. It turned out that the Boat Budaya could be moored there. This was important because all of our equipment was on board and we have to carry it to the film-showing venue and also guard the boat. The part that I liked was that I, the Westerner who couldn’t get used to sleeping on the floor of the boat, could have a comfortable bed in the hotel.  Nashir and I were both charmed by the venue – but would people come? They would have to make the effort to leave the villages at night, maybe hunt for a becak (there are a couple of becak’s in Muara!). Muara doesn’t have a nightlife, there are few streetlights and it would be a bit of a walk – a long walk for the ones who lived up the hillside..

Nashir still had the telephone number of Ishak Aprianto Aritonang, one of the youth that Restuala had selected to participate in the Forum Anak, a program to teach cultural knowledge to selected young people in Muara. He called him and we sat in front of the hotel and discussed the possibilities with him. 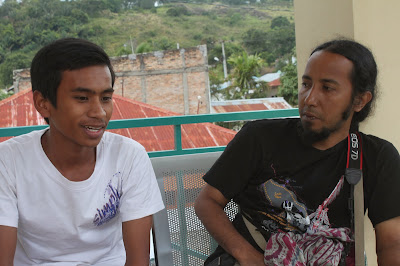 He agreed to drive around on his motorcycle and drum up enthusiasm so that people would come to the showing. So we made the decision and rented the space from boru Situmorang who works in the hotel, and we phoned Captain Siregar so that he would shift the Boat Budaya from the market to the hotel. Then we got to work rigging up the screen and setting up the sound equipment. Lasma and Febrina were at Ompu Rido’s house and would come in time for the evening screening.

Ompu Rido warned us that few would come. She wanted us to show the film at the intersection of the two main streets in front of the bank. It sounded awkward and difficult to manage so we stuck to our plan in the back of the hotel. In the end she was right. She came that evening and her enthusiasm infected her neighbours who came as well, but nobody else from Huta na Godang came. (The next day Ompu Josua told us that she was too old to go out at night; they go to sleep at 9 p.m. and get up very, very early in the morning.) We learned an important lesson.

Nevertheless, the evening was a success, even a resounding success. A lot of young people came and especially other members of the Forum Anak. The leader of the youthful traditional Batak orchestra,  Hendra Siregar, brought his hasapi (guitar-like instrument) and after the film and discussion, he played and several of the young people sang. Brilliantly! They inspired us all and we were truly impressed.


The discussion after the film was played was valuable. The theme was becoming familiar to us. “Of course we would like to continue to weave, but if the market is not strong enough, of course we have to stop.” Weavers look for other ways to earn money, mostly through farming-related activities. Of course there is regret – but they have to be able to feed their families!
Posted by Sandra at 11:15
Labels: Captain Siregar, Forum Anak, Hendra Siregar, Hotel Marsaulina, Muara, Ompu Rido, Restuala Namora