How the spirit of weaving returned to its body

Agus really wanted to go to a national university and she thought that would please her parents. They had often gone on about how amazing it would be if one of their children were to obtain a degree from a national university and they were willing to make huge sacrifices, such as selling their only water buffalo, to make that happen. But in the meantime, they no longer had a water buffalo. The hard times they were in were hard indeed. Agus took the entrance exams and managed to win a full tuition scholarship. She was over the moon and knew her parents would be as well. She had really done her best, gone to a neighbouring city for the first time on her own, and focused intensely on the exam. She knew it was her one and only chance and she succeeded! Back in the village she told her mother about her achievement and her mother burst into tears. Agus assumed that the tears reflected how deeply moved her mother was by Agus’s achievement, but she was wrong. Her mother lashed out in anger. “Why would you do this when we are not able to pay for your needs in the city?” she asked Agus. “I am so ashamed.” 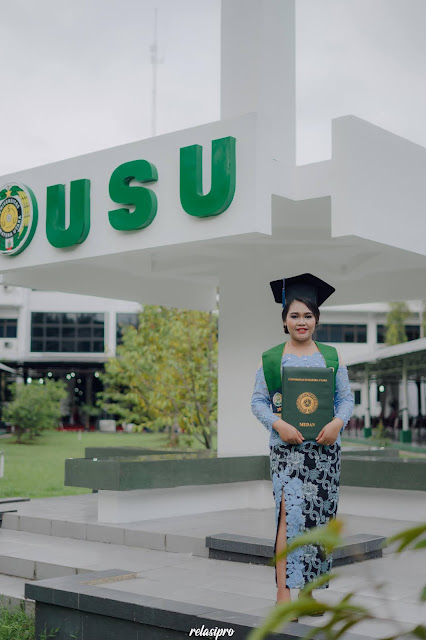 I pondered what Agus told me. Her mother must have been suffering very deep regret at not being able to facilitate her daughter's education.
Agus managed to overcome the situation by finding a sponsor who saw her through to the end of her degree. Recently she has been in a celebratory mood because she has graduated. She now holds a Bachelor of Arts from a national university and has letters beside her name. She has every reason to feel very, very proud. It was her indomitable courage that saw her through. She received her degree with self-confidence, pride and resolve. But I had a niggling concern. How would her mother be feeling given that someone else had supported her daughter? “Does your mother feel a little ambivalent toward the sponsor?” I asked. 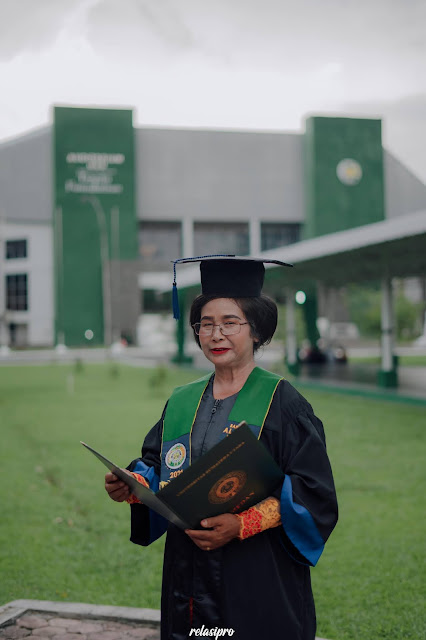 There is no doubt that Ompu Elza also felt proud. Agus dressed her in the graduation toga and took a photograph of her standing solemnly in front of the University, holding Agus’s graduation diploma. But was there also a tinge of sadness, regret, perhaps even a touch of resentment that she had not been the one to enable her daughter’s achievement? I knew Agus well enough that I could ask that question; I wanted to confide my concern about her Mom. I knew what my feelings would have been in her place.
“I will tell you what my mother said,” Agus answered in a decided way. “She said, ‘The spirit of weaving has come back.’”  I had not expected this answer. What did weaving have to do with Agus’s accomplishment? Agus explained. “Mother’s life was weaving. She started when she was very young and she did it every day. Her spirit and the spirit of weaving were one and the same. But then the spirit of weaving left her.” Agus knew precisely when. It was about twenty years ago, when economic circumstances forced her Mom to stop weaving, leaving her heartbroken. Try as she might, she was no longer able to meet her family’s needs by selling the products of her loom. That was how the spirit of weaving left her and how she withdrew from it.
“A lost spirit will return when a body misses it and new sprouts will grow,” Agus explained to me.
I had to digest this. It appeared that Agus’s mother attributed Agus’s success (and thus her own good fortune) to the spirit of weaving. “Is it because she has started to weave again that she credits the spirit of weaving for your achievement?” I asked Agus. But Agus didn't know how to deal with my question. I think that the way I had framed it just didn’t make any sense across our cultural difference. She answered with a parable.
“We plant a root crop (ubi) and the roots sprout new shoots. We can’t tell what the harvest will be because the roots are covered with earth. They can be covered up for a long time. Inang [the sponsor] came and tidied up the earth around the plants, cared for them.  And then there appeared to be new shoots. They represent hope.”
“But what made the spirit of weaving return?” I persisted.  “We don’t know whether the spirit of weaving attracted the sponsor, or whether the sponsor attracted the spirit,” Agus answered simply. The very question seemed irrelevant. “The point is, it returned, and it hadn’t been there for some twenty years. When the sponsor came to clean up around the plants, apparently there were still some shoots; they were still alive. Hope was still growing in the ground.”
This story has kept me in its grip. It reveals so much. In the first place, about gratitude. Agus does what she does, to the best of her ability; so does her whole family, including her mother. I, as 'the sponsor', did what I did. We are only human and we proceed as we proceed. For Agus's mother, it is the spirit that prevails and bestows us with success, if it is to be ours. For us there is but one option: to feel gratitude when it bestows. That's when we experience good fortune. ‘Rejeki’ comes from a higher hand. The spirit prevails. Gratitude is built into such a stance. It is central to life,; it is not just a feeling.
Agus’s story told me, too, that Agus’s mother has felt very engaged indeed in her daughter's
university career and in that pinnacle: her graduation.  Agus’s success had awakened her Mother's weaving spirit. It had been buried there, under the surface all that time, capable of sprouting new shoots. This told me how deep Ompu Elza’s pain had been when she was forced to put down her loom, and just how profound the antidote of her daughter’s graduation had been. It restored pride, well-being, a sense of being fortunate.
All of this confirmed that the spirit of weaving is sweet and good.  It is a source of blessings, ability, pride, self-respect. It truly is a core of Ompu Elza’s being; how deeply lived, the act of weaving can be: positivity and hope, like the shoots of new life, the essence of life.
And I learned about how my Simalungun family lives reciprocally with spirit. I learned about their two-way engagement with the spirit world. Like tending plants. We tend them and they tend us in return. Like the line in a Batak prayer about nurturing rice so that it can nurture us (Eme na hupagodang; Eme na pagodang ahu). When Ompu Elza wove, she was nurturing her weaving spirit. And when she was forced to stop weaving, she lost the spirit that was nurturing her existence.
Postscript

Sometimes reality seems to take a strange twist. Then it becomes a challenge to locate the truth. This time, however, I think it is pretty clear where it lies. And that egg? Is it on my face? I choose to be lenient; this is just the way learning in a different culture proceeds: lots of twists, lots of egg, triangulation and hopefully learning. Let me explain:

Yesterday I shared with Agus’s elder sister, Lasma, how proud her mother had been at Agus’s graduation and I mentioned that Ompu Elza had used the expression ‘roh tenun’. I wanted to get Lasma’s take on her mother’s ‘weaving spirit’. I also wanted to know what the Simalungun word would be for that spirit that had returned to the body.

Lasma told me that ‘roh tonun’ is said when someone completes a difficult task that has taken a lot of time, something like ‘congratulations’ but then with more weight. I didn’t get it. Why the word ‘tonun’ (Simalungun for weaving) and why ‘roh’ (spirit)?

It turns out that some confusion hinged on the word ‘roh’, meaning spirit in Indonesian but meaning ‘come’ in Simalungun. I didn’t know that, and had thought that the Toba word for come, ‘ro’ was used in Simalungun. Lasma explained that the expression ‘roh tonun’ means ‘weaving comes’. I confirmed that with my Simalungun dictionary – and will have to get back to Agus to see how she responds to this discovery. She had spoken to me of ‘roh tenun’, in Indonesian, ‘the spirit of weaving’. Could be that she was  mixed up between the Indonesian and the Simalungun?

But I still didn’t understand why ‘roh tonun’ would be used to express congratulations for a really considerable accomplishment. Lasma had an insight into that as well. “This is an expression that is used by weavers,” she said. When a weaver finishes a textile, the other weavers in the group will say, “Roh tonun” to compliment her. She had learned this from her grandmother, Ompu Elza’s mother. The accomplishment is considerable because it is a long and complicated process to weave a cloth. The process of weaving is apparently used as a kind of measurement for a considerable accomplishment, hence it was used by Ompu Elza.

Once again, however, this interpretation confirms the positive light in which weaving is held.  Whew. But I am still horrified by the extent to which Agus and I had been spinning a tale rather than accurately interpreting a Simalungun expression.

I shared with Agus what Lasma had told me, and Agus said that it did not alter her story. She had been talking about 'jiwa tenun', the spirit of weaving, and she had obtained her information from her mother. She knew her story to be true.

I guess I have to go back and share this news with Lasma. Or ask Agus to talk about it with Lasma.... Reality is not always clear. There can be different perspectives, different experiences, different interpretations. Interpretations can be dynamic and malleable. Culture is never cut and dried or singular or clear, and the process of digging to understand an interpretation can shed much light.