Near the northern tip of Samosir Island there is a museum. Not the Simanindo Museum, but the Gok Asih museum. We spied it from the road, a big sign saying MUSEUM in front of a Batak house. We didn't want to leave a single rock unturned. It seemed that what we were looking for (the pipisan, busur, sorha and iraniran) were simply too old, and of no use for far too long, to be likely to be found in some shed or still stored in someone’s attic. Our chances seemed greater if we looked to a museum for help or some facility that consciously wanted to preserve old Batak objects. 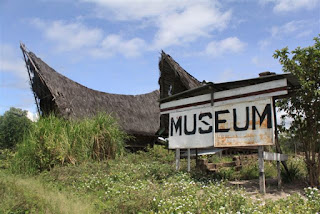 The museum did not seem well cared-for. The path beyond the house was overgrown with the weeds testament to the fact that few people had walked on it recently. It was even difficult to know exactly where one should walk.  Suddenly, I caught sight of a man washing his face in a full rain barrel and I called out to him. His reaction was warm and enthusiastic; he came straight over to me and as we walked over to the Batak house cum-museum together, he asked me if I had lived in Balige and been associated with the hospital. I said that I had lived in the nurses’ residence some 30 years ago but that I had had nothing to do with the hospital. And then he amazed me by recounting our meetings 30 years ago. He had provided the entertainment at Carolina Hotel (on Samosir Island) when I had stayed there, and he had joined us when I was with the man, Sidauruk, whose vision had created the Simanindo Museum. He explained that he had brought his Batak house (to serve as a museum) down from the higher land of Samosir (by deconstructing it and then reconstructing it here) and had filled it with objects that he had found and purchased here and there.

By the time we had climbed the steps into the house, he was tearfully explaining that because tourism had slowed down dramatically and he had no land, he had been forced to sell his collection bit by bit. The objects that we were looking for were no longer there. The spinning wheel (sorha), he recalled, had been purchased by an Italian museum but he didn’t know in which city. He could get a job as a driver in the city, he pointed out, but then he would have to leave the house and it would fall into decay. His sad fate seemed to me to tell the quintessential story of the decline of culture in the Batak area. Even the best of intentions are fruitless in the face of economic conditions that force one to destroy even one’s own culture to stay alive. I could understand his emotion and wished that there could be some way to help him. It seemed so utterly tragic and the tragedy was so much greater than what was happening with this man’s life and possessions. It was the story of his culture.

After reviewing what was left of his museum collection, I told him about our textile project. He was convinced that he would be able to find the missing instruments so that we could get on with things. One would have to search in the hills, he said, far away from where the tourists had purchased everything of value. I gave him some money to compensate him for his efforts and he promised he would call later that evening. He did not, but he called this morning and said that he had had success and that we could meet to see the objects at 2 p.m.. The owner was working in the fields until 4 p.m. but we could take the longish journey and meet them there.

When we finally managed to reconnoiter, it turned out that the owners of the instruments were in Jakarta and he had sought an alternative source for the objects. The people whose help he had marshalled were bringing us right back to the museum in Tomok where we had had our first disappointment upon arrival in Samosir two days earlier. Once again, there had been a confusion between weaving equipment and yarn-making equipment. Obviously, few people anymore know what yarn-making involves, let alone the instruments needed. We had no more time to search further and as we turned our vehicle around and headed towards the ferry from the island to the mainland, I saw the very sad face of our one-hopeful helper and host. The regular wall (the disappearance of culture) that we had stumbled up against again and again on this journey had been a painful experience for him. I know that he really had wanted to help me. I had paid him well, in advance, and he had let me down. I could not help but think that given the painful circumstances surrounding his museum, it was a misfortune that he should not have had to endure on top of everything else.
Posted by Sandra at 17:03