The Merapi has spoken

The sky here in Medan, North Sumatra, is grey and heavy. I wonder if it is part of the great Merapi’s speech? The mountain has changed the course of many lives. It gave me cause to waste a day in Jakarta trying to figure out whether or not to go to Yogyakarta as planned. The whole point of coming to Indonesia at the beginning of November was to participate in the WISDOM conference in Yogyakarta. By the time that I became conscious of the fact that I was crazy to be considering entering a disaster zone just when everybody else was leaving it, the airline companies had cancelled their flights anyway and the conference had been postponed “until further notice”. The gods of the Merapi seemed to be saying, “Go to Medan” and so that is what I did.

The fire-spewing mountain generously offered me unexpected time to be with Nia Fliam. She happened to be in Jakarta exhibiting her wonderful batik textiles. Nia and her husband, mas Ismoyo, are the central organizers of the Fiber Face 3 event scheduled to take place in the springtime in Yogyakarta . The WISDOM conference had given me an excellent opportunity to piggy-back so that I could work on the preparations for the exhibition. Nia had asked me to curate the “Batak spotlight” of this Fiber Face 3 event, and I had accepted with alacrity. A special synergy had begun to emerge relative to the Fiber Face 3 event and now it even had the Merapi co-operating. The discussions with Nia were rich and helpful. And now the Merapi was telling me to use the extra time to go to the Batak country and do “the job” properly!

What is the job? It has two aspects: a documentary film about weaving techniques and a specific collection of photographs and textiles for the Fiber Face 3 exhibition..

The film is based on an ancient Batak text, Rangsa ni Tonun, committed to paper in the 19th century by Guru Sinangga ni Adji who lived in the village of Sait ni Huta in the Silindung Valley (south of Lake Toba). It describes the techniques of weaving from the purchase of raw cotton on the market to the completion of the finished textile. The description of these techniques in the flowery and esoteric language of the Batak knowledge specialist lends the text a sacred and mythical air. The text is so technical that it is hard to translate it without an unwieldy quantity of footnotes. I have always loved the text but never really knew what to do with it. I discussed it as early as 1980 with my weaving teacher in Harian Boho, Ompu Sihol and many times afterwards with different weavers. The exhibition in Yogyakarta offers the perfect occasion to “do something with it.” One of the goals of the exhibition is to link the ancient knowledge of the villages with modern know-how. The text represents ancient knowledge. Filmer, MJA Nashir, will transcribe it into the timeless, international language of images through the medium of film and make it accessible to all. 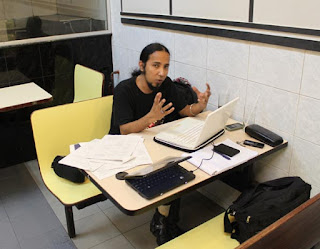 He is sitting in front of me in this fast-food chicken restaurant in Medan with a frown on his face. His hands are moving as he spins and weaves imaginary yarn. Occasionally he jumps out of his seat as he visualizes the succession of scenes that will comprise the film. He is writing the “screen play” and it entails understanding the techniques of weaving. I have given him the original Batak version of the text, called Rangsa ni Tonun, as well as my English translation. He is inspired by the text particularly because of its sacred and mythical qualities and enjoys the challenge of transporting that into the technical component.

All of the techniques related to the preparation and spinning of cotton have disappeared since spun yarn has come onto the local markets. In a few days, we will head off again to the villages to film not only the techniques that are still being practised, but also to reclaim for posterity the last, faded memories of techniques of yarn preparation. I am curious what kind of success we will have. When I did my fieldwork thirty years ago, the memories were already faded.

The organizers of Fiber Face 3 have recognized the importance of building bridges in the textile world between village practitioners and urban fiber artists and between ancient knowledge and modern know-how. Ancient Batak textile knowledge is threatened but this text is an archival jewel that deserves attention.

I am assuming that the Merapi knew that it was important to give us this extra time to devote to the documentary.
Posted by Sandra at 12:31
Labels: Fiber Face 3;WISDOM conference Yogyakarta