The sky, the earth and the lake

This afternoon (Nov. 22), we filmed Mas Nashir’s vision of soft, fluffy cotton dropping out of the sky as though the clouds themselves were dropping down into the lens. The Rangsa ni Tonun text that we are filming is all about the connection between Batak weaving and its powerful spiritual origins. Nashir has been excited about this idea for months. I don’t think that he can see a cloud without thinking of cotton. Luckily, the day offered us lovely, white clouds piled dreamily atop each other. 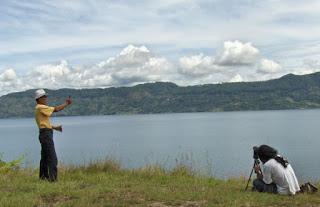 We found a spot north of Tuktuk where there was quite a rapid decline down to the lake. Sprawling on the ground, Nashir oriented his lens so that the clouds were swirling close to the earth and the lake. It was the job of Mas Jerry, our chauffeur, and myself to toss wisps of cotton into the air, to be carried on the breeze into the view of the camera. We had to rehearse because the breeze was not constant and so that we didn’t get our hands in the picture. We tried all kinds of things, but eventually stood just below the crest of the hill and as one of us tossed out the cotton bits, the other fanned them upwards with a piece of cardboard. By the time we were done, the grass was littered with clouds, and our noses and mouths and eyes were filled with them as well. Through the camera, it looked like the clouds were scudding right into the lens. 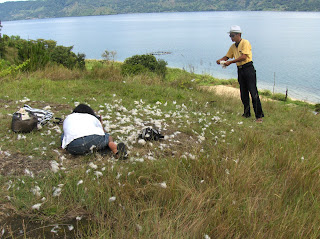 didn’t accomplish much today by way of finding our pipisan, bosur, sorha and iraniran, but nature was kind to us because the skies were just right, the lake was gorgeous and the wind was light and he day was crowned by a rainbow that Mas Nashir compared to our missing bosur (it is bow-shaped). It arched over Samosir Island etched luminously against an iron-grey sky. They say that a pot of gold is buried at the end of the rainbow. This rainbow cascaded with intense light right to the place where the sky, the earth and the lake met.
Posted by Sandra at 19:06