Blue and black and mud all over

One of the things that we had to tick off our To Do list was the salaon (indigo plant) growing in the wild. We tackled it in Muara. Restuala taught us to recognize it and took us initially to a garden where it was growing as one plant among many in a scrubby thicket. In the end, however, Nashir decided to stalk a patch growing on the side of the road because the lake formed a stunning backdrop. He has come to the insight that the lake gives identity to the Batak. Without the lake, so much more of the ancient culture would be lost . 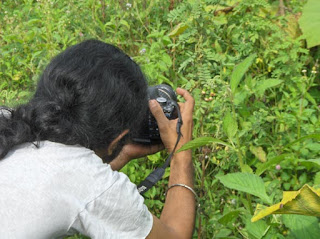 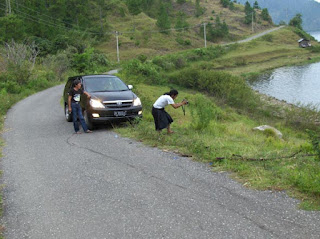 Muara was also the place to film sigira, a dye process that I had never witnessed before and only read about. Muara weavers used to practise it. Apparently, after they had finished dyeing their yarn with indigo and they wanted to transform the deep, rich blue colour into black, they took it to the rice fields where the iron content in the mud did the trick.
A basin-like sink was dug in the sawah (the mud is so liquid that this can be done with bare hands) and, after heating the yarn in a vegetable mixture, it was dumped into the sawah basin. The dyer turned the skein, hand over hand, just as she turned it in the dye pot.

Our indigo dyer passed on the task to a fellow villager and off we trekked to the rice fields.

At this time of year, everybody is working hard transplanting the tender young, fresh green seedlings and the fields are very wet. The first basin that our weaver dug was half in the shadow and so Nashir asked her to make another one in the light.

Finally, the third basin was just right. We didn’t have the room in our agenda to do the full process complete with the boiling of the yarn, so we cut a corner because the Rangsa ni Tonun text is very short on this issue, essentially: “from blue-dyed yarn, it can be turned black, and from black it can be starched.” We know that a true documentary film of Batak weaving techniques would involve all sorts of regional variations of each step of the process (for example Restuala said that some sigira was done without heating the liquid mixture) and perhaps I will one day make a 20 hour serious documentary film. For the time being, however, Rangsa ni Tonun is a magical, poetic text related to weaving. It must inspire and delight. Nashir is the perfect filmer for this task because his heart is that of a poet and he understands the intention of the text. Our sigira moment in the film takes advantage of yet another extraordinary vista, this time of rice fields leading down to the blue calm lake, and the wonderful tangible quality of the slippery mud. How could we help, in these settings, but capture the deliciously earthy quality of the ancient textiles created from materials close at hand given by Mother Earth?
As I did my own documentation of the process, I ended up with a socked and sandaled foot in the sawah mud and even managed to photograph the muddy feet of my cat-like, bird-like, mountain-goat-like, gymnastic-dancer-photographer who also couldn't help himself from slipping into it. The camera is still whole.