Our two days in Muara (arrived Thursday night, and absolutely filled Friday and Saturday with filming) have been intense and immensely productive. Tomorrow we leave for Uluan.

We have been ticking off the items on Mas Nashir’s list as fast as we can, our time being so limited and the absolute, cut-in-stone deadline being the opening of Fiber Face 3 exhibition on 12 February. Luckily Nashir has made an initial first edit and so we could also use this trip to amplify visual themes that he has developed. The close tie between weaving and nature is one of them; Muara’s beauty seemed to lend itself to this emphasis.
The words mist and mystical may not be related except in the way they sound, but the hazy view of Lake Toba in the morning connected them in my mind – and in the film. It was a gentle way to start the day on Friday. If I hadn’t already fallen in love with the great Lake, Friday morning’s shoot would have settled matters forever.

Searching with our guide, Goodman Ompusunggu, a member of Restuala’s team, Mas Nashir settled on a gentle bay just outside of Muara’s centre, to film the arrival of the cotton from the clouds. Once again Pak Jerry and I made ourselves useful by tossing cotton into the air. The currents of the air were changeable that morning, sometimes blowing the cotton in one direction and sometimes in another. The currents in the water were just as frustrating. In the end, we waded out into the water and balanced perilously on slippery rocks to try to get the fluffy stuff to float down to where Mas Nashir was balanced like an acrobat on his own slippery rock, camera in hand. Although I had decided on previous shoots that he was half mountain goat and half cat, on this morning, he became a sure-footed bird.

In the meantime, Restuala was assembling a collection of beautiful textiles, some the villagers would lend to me for the exhibition next month in Yogyakarta and some for our filming needs here. He was finished before we were, and tactfully sent a text message asking us whether we had changed our plans??? After a longed-for breakfast (in Muara, this is no different from lunch and dinner and consisted of rice, vegetables and fish in the one and only restaurant that we wished to visit) we headed over to Restuala’s house to fetch him, the textiles and Nai Evi, our actress. She was going to be the personification of Boru Hasagian sian ipar ni lautan, a line in Rangsa ni Tonun about the first weaver at the edge of the sea. Nashir’s idea was to film her at the top of the great hill overlooking Muara and the lake. The road leading there was marked by a sign reading Pamatapan. I thus learned the Batak work for view or panorama. Indeed, it is one of the most spectacular views of Lake Toba. Such a vista does something for the soul. Openness, overview, vision. It gives hope, clarity and a sense of possibilities.
The day was not clear, but the mist was mystical and we were happy enough. Mas Nashir became a gymnastic dancer moving with sure-footed balance to shift his camera angle around our Boru Hasagian who stood like a statue at the edge of the precipice.

The next morning, he discovered that a piece of grass had infiltrated his camera behind the lens and it marred all of his images. I encouraged him to re-shoot the scene rather than spend the hours that it would take to remove that offensive blotch from each frame of the film. Our kind Nai Evi was patient and willing. And it was not a painful procedure for anyone to return to the scene of such beauty. Even the little children who go to the hill after school to try to earn a penny or two from tourists by selling drinks and chocolate bars were approaching us more bravely and not running away or covering their faces with their bags if we aimed a camera at them.
We also had to re-shoot the textiles that we had selected to represent the possessions of the first apical ancestor of the Batak, Raja Ihat Manisia. Mas Nashir wanted them laid down on the ground at the crest of the hill. Because the second day was so clear and beautiful, the backdrop was intensely beautiful. 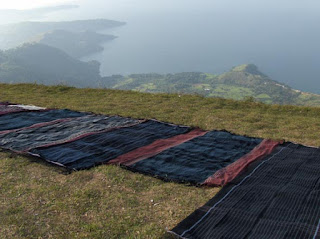 It must have been those wonderful textiles in combination with the view of the lake that inspired Restuala, Goodman and Nashir to become Tiga Raja. They dressed up in the cloths during the break between the shooting of Boru Hasagian, the first weaver, and the textiles of Raja Ihat Manisia, the apical ancestor of all Bataks, posing as great raja of the past, overlooking their ancestral lands. I took an irresistible photograph of this comic but also nostalgic moment. I also couldn’t resist mimicking Mas Nashir and circled around them, camera in hand, pretending that I was filming them while doing dance and gymnastics. It seems to me that he is having the most fun! 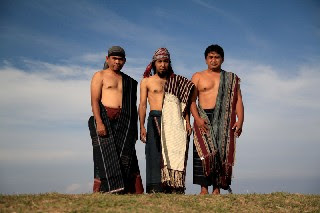