I wake up to the sound of boat engines. It is market day in Balige and the traffic from here to there across the lake will be heavy. Although it is still dark I can see the lake from my balcony.

I have jetlag and I want to sleep longer, but Restuala Namora said he would be coming by to fetch us at 7 am. When we arrived yesterday evening, we immediately had a planning meeting. 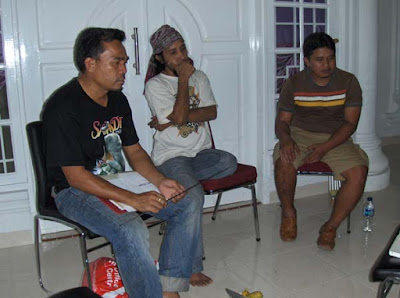 Restuala Namora Pakpahan, MJA Nashir and Goodman Ompusunggu
watching the first edit of Rangsa ni Tonun on the balcony of our palatial acommodations.
The scene is now set and today we must try to finish filming as much as possible of the still outstanding parts of the film, Rangsa ni Tonun.

That is why I am here.

I made the decision to come only last Saturday as I was checking flight availability for the first week of February. It became clear that I could fly right away and it wouldn’t cost me extra. Moreover, my photographer/filmer needed some assistance finishing Rangsa ni Tonun. I was beginning to realize that if I flew to Indonesia immediately, as the film’s producer, I would actually be able to be present at all of the filming and the fine-combed editing. It suddenly seemed grossly unfair to have thrust all of this work into the hands of my filmer. As enthusiastic, capable and willing as he is, he is neither a weaving expert nor a Batak scholar and the Rangsa text is difficult and esoteric. It was time to assume my responsibility. I started to pack and within three days, I was in Medan.

Last night was my second night in Indonesia. I am back in Muara, the valley that received me so indescribably warmly last November (see blog Muara, O Muara). Once again my team is complete. Pak Jerry, my beloved chauffeur was available and Mas Nashir was ready to return to the lake.


And then there is Restuala, my host in Muara last November. Here in Muara, he is a key member of our team. While I was working in Holland during the past six weeks preparing the Fiber Face 3 exhibition “spotlight” on Batak textiles (Exhibition Yogyakarta 12 – 25 February), he was working on our sorha (spinning wheel). When we arrived last night, it was sitting tidily and ready for use on his living room floor. Nevertheless, for me it was like a phantom, a mirage; it was eye-rubbingly unbelievable to once again see a spinning wheel in the Batak area. And when I turned its handle, it worked!
Restuala knows everyone in the village. He was born and raised here. Like all Batak children of his generation, his aspiration was to leave the village and seek his fortune in the wide world beyond. He was successfully and energetically building his career in Jakarta when he was called back home. He is the youngest son (siampuan). It is his responsibility to return and perpetuate the family presence in the village. Restuala has embraced this fate with the same energy that so far characterizes everything that I have seen him do.

He is an enthusiastic fellow and he has a vision. His dream for Muara is to bring the village into the future in a way consistent with what the future needs: a sustainable community socially, culturally, economically and environmentally. He sees that the best talents of Muara have left, just as he did. This successively erodes the culture. It is a vicious circle: the village has little to offer to the youth and they leave, whereby the village builds little to offer to the youth of the future. Restuala wants to break this cycle.

I decided to do an "Edward Curtis photo" with Restuala.


Muara has everything, he is fond of pointing out: a beautiful location on the edge of one of the most extraordinary lakes in the world set against a backdrop of steep hills offering panoramic views as stunning as one would ever want to see. The soil is fertile, fresh water is abundant; fruit trees, rice and fish are plentiful. The culture is sufficiently intact to build on. If handled properly, Muara could become a tourist destination of allure. Restuala has assigned himself the goal of realizing this potential. From our discussions last night, it is clear that he is not wasting a single moment.

But our focus for the moment is on the filming of Rangsa ni Tonun.

The enterprising Restuala has managed, courtesy his connections, to put us up in a palatial white house with pillars, with every possible comfort (the owner is in the city).


This morning, the world outside is beginning to throb. A man has gone to fetch a group of children to bring them to school and he is teaching them songs under my balcony; their sweet and trusting voices fill the air. The future of Muara is waiting for us. Restuala will be here at any moment and we will see what the day will bring. In the evening, we will hear more about Restuala’s plans and activities. He is a person to watch. Ten, twenty, thirty years from now, I will be able to say, “I met Restuala when he was just beginning to work on his vision. He started with ulos, the textiles that represent the soul of Batak culture.”
Posted by Sandra at 16:22
Labels: Batak textiles, MJA Nashir; Rangsa ni Tonun; Fiber Face 3, Muara, Restuala Namora