My findings while making the Rangsa ni Tonun film have been important as I consider activities for the three young men in the workshop. ‘Weaving is women’s work’ is a familiar mantra. I have now modified that: women can’t weave unless they are supported by men in the same way that Si Boru Deak Parujar could not create the world without her brother’s help. Men make the weaving equipment. And that says a lot.

The first task that I gave to the men was to make turak, weft/bobbin holders, for the women. This was once a part of the Batak courting ritual. A young man would decorate the bamboo holders with messages in Batak script for the object of his affections. A husband would make it for his wife. It seemed a simple enough project to assign the young men because the weft holder is, essentially, just a bamboo joint. Jesral Tambun, one of the members of the workshop, is a wood carver and would be able to assist the others with the task. Ojak Silaban had made an hasapi (Batak violin) and thus also demonstrates considerable skill in working with wood. The results would be memorable souvenirs for the young weavers.

Our first discovery has been that the simplicity of even this task is a delusion. The species of bamboo that we need does not grow in Muara. The young men charged off in search of it on their motorbikes and found species the walls of which were too thick and the joints of insufficient diameter.  It was market day, but the option of purchasing turak on the market disappeared with the decline in weaving. The execution of the ‘simple’ turak had to be postponed until Jesral returned home because he knows where the bamboo grows. (We later learned that we could have purchased one in the Tarutung market. One person sells them there. But that would have been too late in any case; the workshop ended on the day before the Tarutung market.)

The young men came back with wood to make the hatulungan or shed stick and the pamapan or warp beam. But the wood would first have to dry. Restuala had collected weaving equipment from former weavers in Muara, so we were not desperate for equipment. There was enough for Lasma and Febrina to work with. The exercise was solely to give the men insight into the complexity of making weaving equipment. It requires knowledge of wood species and where they are found, the needs of the weavers, understanding of yarn and the weaving process and of course skill in woodworking.

Jesral looked at the turak in Legacy in cloth and explained that the colour difference (white and reddish-brown) in the bamboo revealed that the maker had peeled off the skin of the bamboo at one end and oiled it. The bamboo would take around three weeks to cure. Even the simple turak is not an instrument that can be produced on the spot! 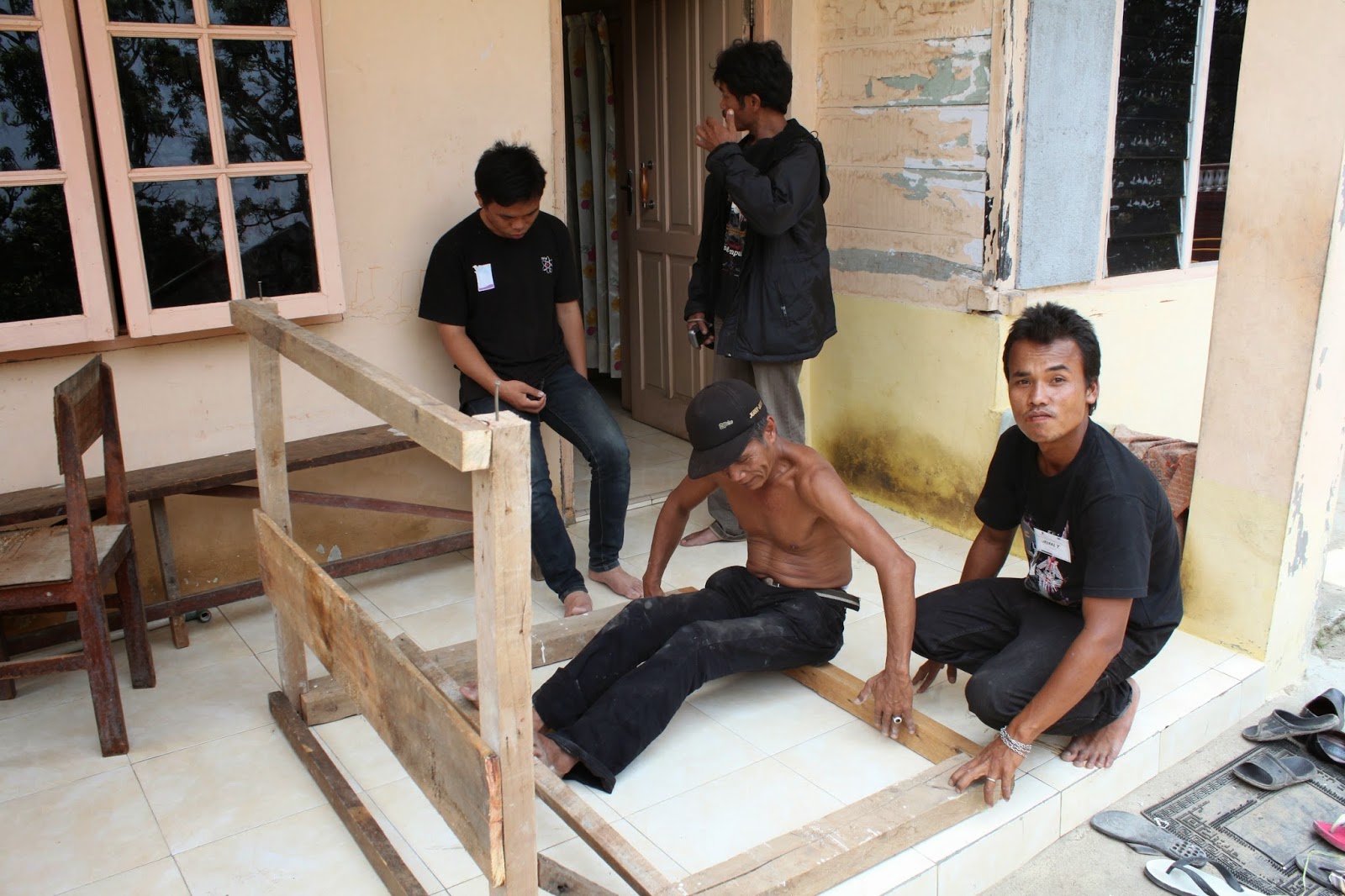 This will take time, considerable thought and effort…maybe in the future. The seed has been planted.When we visited Jesral yesterday on our way home from the workshop, he had already made a turak. He wanted to make one similar to the one that he had seen in Legacy (I told him that it had disappeared when I exhibited it many years ago in The Netherlands). Instead of Batak script, he had added subtle carving at the end. I look forward to seeing the finished product one day.