A Hundred Blessings: Investiture by T-Shirt

MJA Nashir and I were astounded when a young Batak fellow came to our Pulang Kampung I exhibition in Erasmus Huis in Jakarta in 2011 bearing a heavy, awkward, trussed-up bale. When we opened it, we discovered 100 T-shirts printed with our poster image. 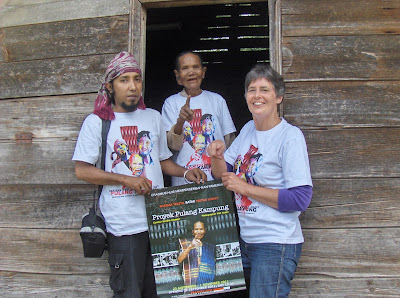 It was a gift from someone who believed in our cause: Christian Gultom (he had read about it on Facebook). Christian is a quiet man who has a textile business to support himself while he devotes his heart and soul to those who are less fortunate. He is a rare person with a heart made of pure gold.

For Pulang Kampung IV, he promised us another bale. Nashir made the T-shirt design and not too long ago the heavy freight was delivered. Now I see from the pictures that Nashir has recently posted on  Facebook that he and the organizing team at Taman Mini are all wearing the T-shirts. Like an emblem of solidarity with the Pulang Kampung effort.

Nashir composed a photograph of himself wearing the T-shirt. He adopted the familiar Ompu Nerda pose, pointing his finger at the viewer, demanding reflection:

We will use the T-shirt as part of the fund-raising effort. The remainders of the bale will be snapped up. Knowing that, Nashir has ordered some more (at our cost).

Christian Gultom’s gift is giving over and over again. In 2011 we distributed the first bale in North Sumatra among those who had played a role in the first Pulang Kampung project. Now the shirts have increased symbolic power. The wearers are members of the team and supporters of the the third Pulang Kampung journey. There is every indication that there are growing numbers of these.