Meeting some of the Pulang Kampung Crew

Today I went to Taman Mini (a route embellished by Pulang Kampung posters and banners) and saw in ‘real life’ the places that I had been privy to through Mas Nashir’s photographs on Facebook. I also met the people about whom he had written and many more. I experienced first hand how things “roll along” (I don’t know any other way to describe it) at Anjungan Taman Mini. First this, then that, then the other. As much as the place throbs with life and ideas, it is calm, not harried, and seems to comfortably accommodate everything that comes its way.

We started out on the ground floor of the Malay house seated around a small table. Everybody had his turn to explain his connection with the Pulang Kampung pre-voyage preparations. It was moving because nobody is paid or ordered to do anything. There is no written schedule and no boss. There are only regular meetings and discussions, in-depth sharing that imparts everybody with the sense of schedule and inspiration for the next step. Nobody has ever done anything like this before and the concept is new. The path is being made by walking down it. It defies every manual of business organization. Jeki Simatupang explained the Batak word: marsiadapari: facing every day together. Bataks in villages once had informal meetings in the mornings and this ‘managed’ (poor term because it suggests bosses, hierarchy and schedules) village life. People shouldered burdens collectively, helping first him, then him in the fields or building a house. There was no payment; there was only the sharing of responsibility to achieve shared goals.

Pak Tatan explained his vision of filling the architectural wonders from North Sumatra with creative synergy so that they would not be 'just empty buildings'. His vision and support have built this remarkable crucible in which the concept and project of Pulang Kampung will be launched on 24 – 25 August. He described it in terms of colour: taking the colour of the archipelago and letting it sizzle on the grounds that are his Taman Mini jurisdiction. 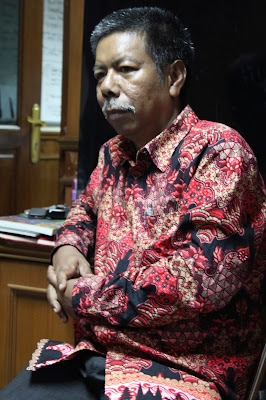 He is a quiet and wise man. One feels the space that his being offers to allow things to transpire.

Ojak Tampe joined us quietly. When it was my turn, I referred to him as being one of the special wonders of the Pulang Kampung voyage. He had come all the way from North Sumatra out of conviction that something was going to transpire that would be important in his life. He took the opportunity to explain why. It moved him so deeply that the tears rolled down his cheeks. How could I not feel the privilege of having him aboard? He mourns the loss of his culture and wants to do what he can to fill himself with the knowledge of the ancestors. His path is as unique as it is lonely and difficult. There is no teacher for him and no institution to support him. He was soft-spoken, polite, clear, authentic. Independent of spirit. Infinitely dear. How could I be anything but curious how things will unfold for him? And anxious for them to unfold well.

Ompung Yan Harahap was with us all the time. He said little but he was utterly devoted to what transpired. His wily person jumped up to fetch water, and cassava chips; he was a kind of bridge between everybody and all activities, the oil in the machine. Nashir had said that he reminded him of Pak Jerry and I had to agree. A painter (our meeting took place beside one of his paintings that brought the feeling of Samosir Island to the table) and logistical genius devoting himself to ensure that things stay on track.

These were the members of the Pulang Kampung crew that I met today, a hodge-podge mixture thrown together by passion and fate – and especially Mas Nashir. Mas Nashir said very little at the meeting; he just let it happen, but I and everyone around the table knew that this magical crew had coalesced around his magic, his film clips, his writing, his simple, golden heart.