Claire Holt visited the town of Kalosi between Parepare and  Tanah Toraja. Inevitably I encountered the landscape that she described.
“We passed vast stretches of empty undulating prairie-like land. Then, after having approached some mountains to the east, we entered the fertile plains of the Sa’dan river and its tributaries. Luminous green sawah’s, buffaloes with their calves, men planting out young rice-shoots in inundated fields – their familiar beauty reminded one of Java. Further all associations stopped. We were in wild mountainous country. In the distance before us appeared a sharp peak of a rocky mountain towering high above the other mountain masses, like a solitary giant guardian. …”

Claire Holt spent the night in Kolosi.
“The fame of Kalosi’s pasanggrahan had reached us … The rest-house was renowned for its picturesque situation for the fresh European vegetables grown by the keeper, an ex-soldier, and the keeper himself.
“The rooms into which we were shown upon arrival, by the prim russet-haired man, disclosed that the ex-soldier was an ideal housekeeper. Mosquitoe-net, bed-linen, curtains and towels laughed with dazzling freshness, doilies flirted with flowers in vases, every piece of furniture looked as if it had been painted yesterday.”

I decided to look for the pasanggrahan. A network of pasanggrahan, or lodgings, had been built by the Dutch. Hotels at that time were few and far between and pasanggrahan were dependable places where one could spend the night. Claire Holt mentions, between brackets, in a subsequent chapter, “(Rooms at the government rest-houses in Celebes have to be reserved in advance, which is easily done owing to the net of telephone lines which connect all stations and their officials into one big community.)” When I did my first fieldwork in the 1970’s, I was still able to use the pasanggrahan in Pangururan in the Batak region. Claire Holt’s use of these lodges demonstrates their usefulness.

We saw an elderly man on the corner of the road as we drove into Kalosi and the driver stopped immediately to ask if he knew where the pasanggrahan was located. We were in luck! He knew! And we were precisely in front of the road leading to it. We were told to go straight ahead and then turn left. It was a forgotten road and it got worse as we drove up it. Eventually it came to a dead end. There was a view over the town below. Presumably the setting had been carefully chosen for the renowned pasanggrahan. 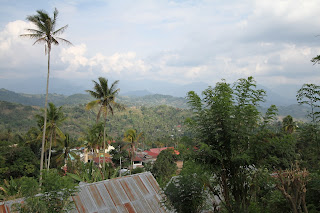 We asked a local – and then barely made out the word pasanggrahan on the edge of the roof covering the dated and declining cement building.

The architecture looked too modern to me. I doubted that I had found the real pasanggrahan from the days of the Netherlands East Indies. I went wandering and snapped some pictures of little boys in the wooden building next to the one labeled ‘pasanggrahan’. It, too, was in sharp decline and while a sign indicated that it was a ‘silk centre’, it seemed to be passing as a storage place for wood.

I then spied a neighbour with a long knife dangling by his side and I approached him to ask about the pasanggrahan.
He confirmed my suspicion that the cement building had been constructed after the colonial era. To my surprise, however, the original had not been torn down!  The wooden building with wood stacked on the veranda was the original!

We set about making pictures and realized that every detail pointed to its colonial origins: the tile floors, the drains along the walkways outside, the kitchen at the back, the doors, the veranda, the expansiveness of the building, the semi-circular stairway leading to the front door. Despite its glory being long past, there were still well tended plants in front and in pots, that brought a caring housekeeper to mind. More recently the end of the building had been used as a tiny dry-goods store. 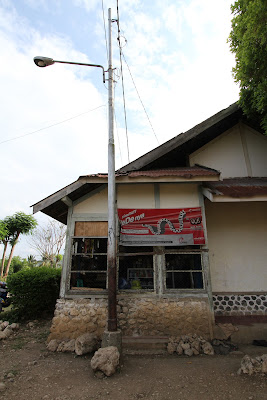 The end of Claire Holt’s tale brings one down to earth with a thump.
“Little could we suspect at that time that some six months later the neat ex-soldier-housekeeper would be murdered in his sleep by a house-boy he had employed and who was said to have been the lover of his plump, dark Menadonese wife.”