Today we visited Nenek Panggao. This meeting was the central purpose of our trip. On the first day of my travels, three years ago, with my photographer MJA Nashir, he said that he would like to take me to visit her.  Nenek Panggao is high up there in our pantheon of amazing textile makers. She is also a member of our collection of "The Last Weaver". 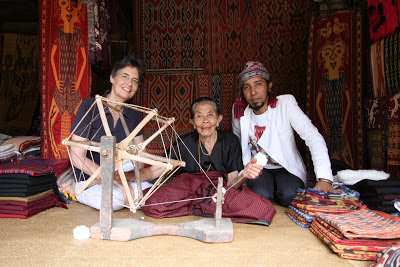 She is a Sa’dan Toraja spinner. She had learned to spin from her grandmother during the Japanese occupation of Indonesia (WW II). The cloth was all used up and people turned again to their cotton shrubs, spinning wheels and looms. But why does Nenek Panggao still spin? For tourists! And she let us know that the elderly woman living on one side had died and been buried. On the other side, the elderly woman was ailing. There is only herself left now, and she is 83 years old. “Will it all be over when you leave?” I asked. She pointed to her daughter. Her daughter will take over –but the yarn that she makes is not as good. She needs more practice.

Nenek Panggao had a variety of textiles in her stall, the nicest of which were made with handspun yarn. She said that while she was the last in Sa’dan, there were spinners in the more Westerly Toraja area where the cloths were woven. They fetched her finished yarn, used it in their textiles and sold them in Nenek Panggao’s stall.

Nenek Panggao had learned to weave but she could only weave plain black or white cloth, as used ritually by the Sa’dan. She couldn’t make either ikat or supplementary weft textiles. She explained that each region had its own strengths – and hers, clearly, was spinning.

“Tourists think it is easy, so I invite them to try it. They discover that it is very difficult.”

“I know it is difficult,” I said, “but I would like to try it with your help.”

She was delighted to be accommodating and I received a lesson in which I learned that there must be balance between the speed with which the wheel is turned and the speed that the spinner pulls on the cotton being spun (coordination between two hands). The hand holding the cotton must not pinch it too tightly. The wheel must be spun at the right moment. The spindle must be balanced or it will fall out. And so on. There are so many factors to take into account at the same time. Spinning is top sport. Feeling, Hand-eye coordination. Practice. Balance. 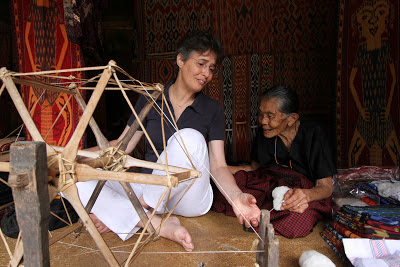 Perhaps I will spin when I am old. Watching Nenek Panggao, it seemed such a nice way to pass the time. 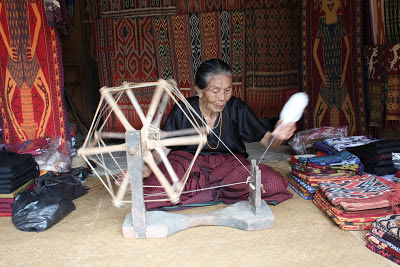