One of the women who so kindly greeted me in Pangkadjene, invited me to visit with her father. He was ailing and elderly, she said, but he was a writer and knew a great deal about the local history. He lived in the neighbouring town of Segeri, the next stop on Claire Holt’s trip.

She said that he lived close to the Bissu. This really made my ears prick up as the Bissu had danced for Claire Holt. They are a group of transvestites, homosexuals, hermaphrodites, essentially beyond the normal physical pale, men with female attributes. They are inducted into certain rites and knowledge, have ritual paraphernalia, and participate in sacred and secular rites.

We drove on to Segeri and found the home of the elderly Haji Madusilah. It was a traditional, still unpainted, Buginese house with lovely dark wood, very well tended. A young woman invited us in, but she did so with some hesitation saying that her father was not well and we should not stay more than 15 minutes. 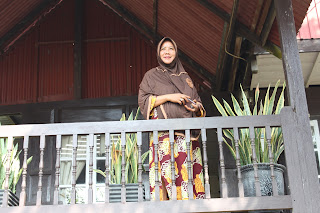 After some time, he was able to receive us. He was almost blind, but still quite lucid and spoke some English as well as Dutch. It was clear to me that he enjoyed having foreign guests. He had once been the head of the Education Office. He mentioned that some local ritual paraphernalia were now found in The Netherlands. He pointed out that the Dutch had been concerned that the objects would not be sufficiently cared for and had therefore deposited them in Dutch museums. Which ones, he did not know. 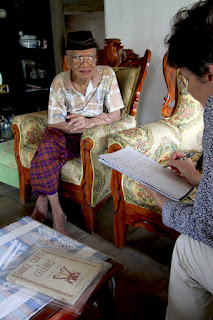 He was able to tell us about the Bissu and their dances. They are still in Segeri and still perform their rites. Afterwards the old man’s daughter joined us in the car to find the home of the Bissu – as had been described by Claire Holt. There we learned that while we had been speaking with the old man, the Bissu had gathered to prepare the agricultural rite that they will perform in the coming months. The building was empty when we arrived, however, and only neighbours were still around. 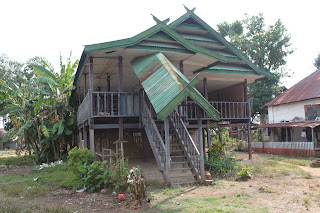 I am quite struck by the acceptance and existence of indigenous ritual here, and also by the Buginese homes. There are no bungalows, as in the Batak area. Everyone lives in traditional architecture. How charming the Batak area could be if the people had more pride in their culture.
Posted by Sandra at 18:08