The first day ended in Parepare. Parepare is south of the Mandar area, and, although 3 hours away in the car, relatively speaking not far. Anybody who has researched Batak textiles knows the word ‘mandar’. It is the Ulos Hela, the ritual sarong given to the son-in-law during wedding rites. I know that the mandar in the Batak area used to be brought in from Minangkabau. Presumably the Minangkabau obtained it from Bugis traders. I declared myself crazy if I did not investigate mandar textiles a wee bit when I was in Parepare.

The first step in this process was to try to find the market and start up a conversation with a seller of sarongs. I never got that far. While my driver was looking for the market, I was standing beside a women’s clothing shop that was just opening. The woman mopping the floor kindly let me in. She turned out to be a Mandar. She called her boss, who was Bugis who promptly ran off to find some mandar sarongs for me as she had none in stock.

I wanted to know if there was any weaving left in the Mandar region or whether it had all become centralized in Bugis hands. I was told that the weaving was in sharp decline. The young woman remembered women weaving with backstrap looms when she was growing up. She, herself, had not learned it. She did not know the current state of affairs.

The women could tell me that there used to be natural dyes in Mandar, but they could not tell me whether there were still natural dyes being used. They obtained a maroon and a black colour using natural dyes. These colours are still popular, although obtained using synthetic dyes.

The sarongs they showed me had the traditional simple pattern of squares made by stripes in warp and weft. The stripes now contained synthetic silver yarn so that they would gleam. This is currently all the range and is woven into virtually everything that is made. The Batak are not the only ones to obsessively follow this flashy trend! 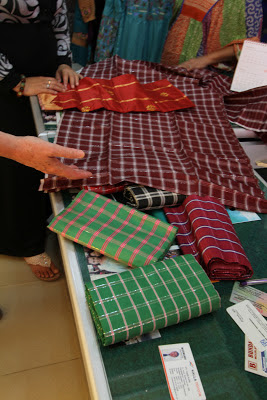 I now long to visit the Mandar villages as I wish to know whether I will hear the sword beating the weft into the fabric, where they obtain their silk, whether they are still using natural dyes, what their looms look like, whether there is a revival movement, how they used to market their textiles and how they do it today…. This time around, I did not get that far.